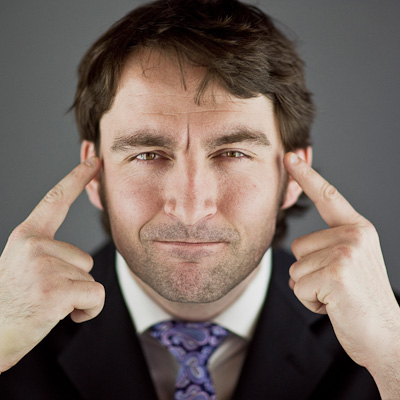 A Cheeky Tour of Religion, from Highlander to Heaven and back

“Don’t put too much pressure on yourselves. It’s just a show. No one’s going to lose an eye.”

As we approached our date with Jimmy Hogg’s show yesterday, both Mom and I were receiving somewhat ominous signs from fellow Fringers we knew along the way. One said, “For some reason, he’s been getting terrible reviews.” Another said, “I won’t say a thing about it to you beforehand. I don’t want to prejudice you one way or the other, so you can make up your own mind.” Which I appreciate. But… hmmmm….

Frankly, though I enjoyed Hogg & The Humors with Mom quite a lot last year, I wasn’t a huge fan of Jimmy’s 2009 solo show Like A Virgin. He was his usual great at working the crowd, but the thing went off on so many tangents and then got derailed so often by the crowd-engaging antics that it didn’t hold together as well as some of his previous shows with stronger narrative spines keeping them on track. So I really wasn’t sure what to expect. But Mom really needed her Jimmy Hogg fix, and I am all about giving Mom the Fringe she wants. Turns out we couldn’t have chosen a better outing than Wisdom: Part 1

“A part of me wants to talk about religion, and the fact that it’s poisonous nonsense.”

I’m mighty tempted to read some of the other posted reviews but I’m going to resist the urge and give you my opinion rather than a response to any one person’s reaction. I can see why some people might get their dander up. Jimmy Hogg is talking about religion. For some people, that just won’t do. (Heck, part of the audience for Tom Reed’s Twilight parody nearly turned on him for a passing joke about Jesus. Really? It’s a Twilight parody. It’s a joke. He’s not serious. He’s not dunking a crucifix in a jar of urine. It’s a Fringe show. No one’s burning your church. Relax.)

“If you get to The Veil of Forgetfulness, you’ve gone too far.”

And here’s the thing I really don’t get about the supposed “uproar” and people taking offense – Jimmy Hogg isn’t making fun of anyone’s beliefs. And he’s certainly not singling out any one religion for gentle ribbing. He’s pointing out some of the absurdities of multiple religions. He wisely avoids the easy target of religious fundamentalism, because 1) it’s been done, overdone, and then redone; 2) it’s too easy; and 3) it’s the third rail of entertainment – one can’t hold a conversation with the irrational because everyone’s brain shuts down and their ears seize up, even though their mouths keep running. But he’s talking to a Fringe crowd here, right? We can handle it, right?

“It would be racist, if they actually existed.”

Plus, Jimmy is the most genial of Fringe performers I have ever run across. I stand in awe of the way he can work a crowd. He thinks on his feet better than almost anyone I’ve ever known. He is nimble and quick-witted and genuinely likes and appreciates his audience. The intention of Wisdom: Part 1 is not to offend. The intention of Wisdom: Part 1 is to start a conversation. A conversation well worth having. When it comes to matters of faith nobody is going to change anybody’s mind, but that’s not what we’re after here. We need, desperately need, to start having a dialogue about these things again. And if there’s one thing that Jimmy Hogg is good at, it’s conversation. Seeing one of Jimmy’s shows is like hanging out at a party with someone who has a great story to tell and is wonderfully skilled at telling it. And his intention is never to make you feel dumb, like he’s better and smarter and more clever than you (though often, of course, he is). You end up feeling a little smarter and better and more clever for having listened to him. He raises the tenor of the conversation in a non-confrontational way, but he’s still not going to let silliness go unchallenged or unremarked.

“Mormonism – Christianity, with an extra dollop of nonsense, mixed with space aliens.”

Give the man some credit. As Mom said, “He wore a suit. I’ve never seen him wear a suit before.” My mother’s an ordained minister in the American Baptist church. So’s my father. Mom’s also studying Islam, and holding workshops with a Muslim friend of hers back east in conservative Pennsylvania – going to churches and mosques and speaking about the similarities and differences between the Bible and the Koran (or Qur’an) and their respective faiths. If anyone’s going to take offense, it’s gonna be one of us. But there was nothing to offend us here. In fact, I was reveling in the fact that despite his protestations to the contrary, Jimmy actually was going to spend the bulk of his Fringe time, after discussions of the Highlander (complete with Sean Connery impression) and the Sandman, who apparently sold him out to Santa Claus at Christmas when he was a kid and imperiled his holiday present quota, discussing things (intelligently and humorously discussing things) like the levels of Heaven as different kinds of parties with quite unexpected guest lists (Hitler?) through which you could come and go as you pleased until you found a party you liked.

“My family was sort of vaguely Christian – people who don’t think about religion much, but are scared of death.”

Honestly, I’m more offended by bad theater than I am by intelligent discussions of religion. Faith isn’t about having incontrovertible proof. It’s about having doubts, and hope, and believing anyway. If my faith can’t handle the occasional poking and prodding of an honest question now and again, I think *I’ve* got some work to do – not the person who asked the question. The title Wisdom: Part 1 holds the promise of more to come. Bring it on, Jimmy. I shall happily listen (and perhaps sputter in disbelief on the sidelines, but enjoy every minute of it.)

Also, Jimmy co-wrote and directed Oneymoon over at the Southern, so check that out, too. Fringe show #22 – Sunday, 8/8 10pm