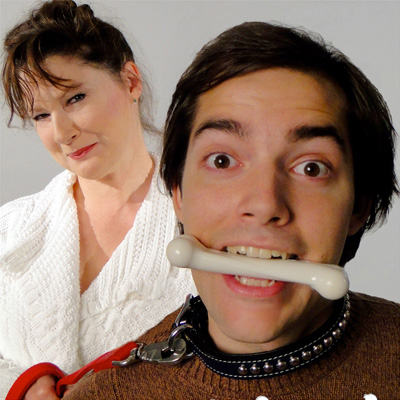 OK, not a real dog, just an actor playing a dog.

Hmmm… an actor playing a dog… where have I heard that before…?

“Dogs may be Man’s Best Friend, but who knew that they were also Woman’s Best Boyfriend? Caroline trades in her demeaning, bullying beau for a dog named Carl, who quickly learns how to dance, talk and win his mistress’ heart. A satiric look at the perils and pitfalls of love, sex, relationships, therapy and pet-ownership … and not necessarily in that order. Please note: No animals were harmed in the making of this production, but the actors did have to miss a couple of meals.”

Plus, who doesn’t love a good Fringe underdog story? Not that most Fringe acts aren’t underdogs, but this one’s really coming down to the wire (I can’t top the press release this time)…

Fringe Show Squeaks in by the Skin of Its Canine Teeth

The Minnesota Fringe Festival show, “Stay Carl Stay,” squeaked into the Fringe at the last possible moment. Its cast and crew never lost hope and plowed ahead with their production even before they had actually secured a slot in the festival.

The producers and cast of the Minnesota Fringe Festival show, “Stay Carl Stay,” didn’t actually have a slot in the festival until this week – months after most of the other 160+ shows had captured slots. But that didn’t slow them down. They secured the rights to their show – written by former Brave New Workshop performer and Emmy-winner Peter Tolan – cast the show, gathered props and started rehearsing … long before they actually had officially made it into the festival.

“We were number 31 on the waiting list after the Fringe lottery last February,” said co-producer John Gaspard. “People with past Fringe experience told us that we were a shoo-in, as upwards of 50 shows would drop out before the Fringe actually starts on August 5th.”

Despite that rosy prediction, the move up the waiting list was painfully slow and, after several months, the troupe finally found themselves at the number 3 position on the waiting list. “We decided at that point to bite the bullet and just start,” said Gaspard. “We rolled the dice that we would get in and we did – but at the last possible second.”

Although they had moved up to the number one slot on the waiting list by last week, a new hurdle was looming on the horizon. After Tuesday, July 20, the Fringe was going to abandon the rankings on the waiting list. If a slot became available after that point, it would go to the first producer who answered a mass e-mailing.

“It basically would have put us back in a lottery situation,” Gaspard explained. But fate intervened and at the eleventh hour a group coming from overseas for the festival was denied their visa … and a slot became available for “Stay Carl Stay.”

“We were able to hit the ground running,” said Gaspard, “because we had our cast in place, had our props, set pieces, and PR materials ready.”

And what if they hadn’t gotten in? “We were already planning a one-time performance for our friends and families,” Gaspard admitted. “But we much prefer being in the Fringe instead.”

This will be the area premiere of “Stay Carl Stay.” Written by Peter Tolan (co-creator of “Rescue Me,” Emmy-award winning writer of “The Larry Sanders Show,” “Analyze This!”), “Stay Carl Stay” is the story of Caroline, who trades in her demeaning, bullying beau for a dog named Carl, who quickly learns how to dance, talk and win his mistress’ heart.
The play is a satiric look at the perils and pitfalls of love, sex, relationships, therapy and pet-ownership … and not necessarily in that order.

[Blogger note – one of my favorite things about this whole scenario, their motto…]

Berxco Theatrical: “We’re not really a theater company. We just act like one.”