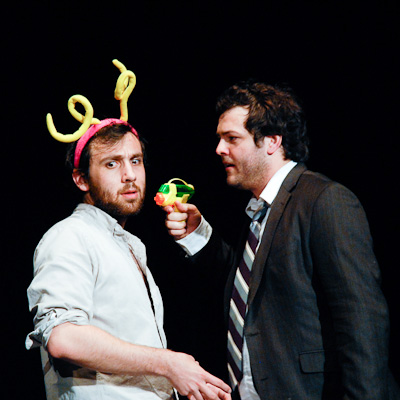 A Grab Bag of Absurd Bits and Pieces

“We’re fine, jumbled, wonderful, underneath a town where we both used to live.”

A friend was saying he was glad that Shelby Company was doing something a little different this year, because he didn’t think he could take something quite as intense as their first offering to us “Winnemucca (Three Days In The Belly)” again quite so soon. He loved it, of course, as did I, but some people can only be overwhelmed so much by theater in a short span of time. Personally, I’d love it if they knocked my brain around again with a script that good. Once a year? I could take it. Heck, I’d like someone to keep pushing my limits, personally. But I can understand the impulse to want to shake things up a bit, on both sides of the footlights. I knew whatever Uncle Shelby’s Traveling Treasure Trunk had to offer, it’d be worth seeing.

In fact, they’ve got so much in their Treasure Trunk, it doesn’t all fit in one Fringe slot. So they’ve got a rotating assemblage of 18 different scenes and monologues by Jonathan A. Goldberg and Dan Moyer (author of “Winnemucca”) that are not only shuffled in content but also sometimes in casting from one performance to the next. For instance, half the line-up of the show I saw is being replaced by other material for the next performance, and the ones that repeat might not have the same faces in the same combinations. Of course, there’s only four actors in the ensemble (Lauren Glover, Nathaniel Kent, Amy Landon, and Dan Moyer), so it can’t switch up that much for the audience, but I’m sure it keeps the performers (and director Carl Howell) on their toes.

On the roster the day Mom and I saw it…

“The Monster Closet” – what do you do when the monster in your closet when you were a boy sticks around into adulthood and begins an affair with your wife?

“Ghosts of Stingrays” – when being haunted by your first love just won’t do, and he has a twin

“Magic Hour” – sometimes, you can love the sunset a little too much

“Come Fly With Me” – what do you do when you get your girlfriend mixed up in your genetic mutation experiments?

“Glass Indians, Iron Cowboys or, The Barker” – when how long you can convince yourself to believe a lie means you can die happpy

“I can give you that moment, and you can give me your organs.”

The challenge with material like this is that you can only take things so far in a single scene or speech, no matter how good the material is, or how good the actor is. There isn’t a chance for the experience to accumulate into anything. There’s a “one joke” or “one feeling” premise. Good jokes, good premises, good actors, good show. You’re much more aware, however, that you’re watching theater. There’s much less chance to submerge yourself in the story, and follow the characters on a journey, because you’re switching up characters every five to ten minutes. You’re constantly rebooting and starting over. Not a bad experience, just a different one. It makes for a great sampler. There aren’t really any duds in the bunch.

There was, at least the day I saw it, a preponderance of sexual deviancy – often quite original sexual deviancy – but sex was not a fun thing for these people (and mutants). There was a lot of angst, and unpleasant consequences. Oh, and death. Lots of death. Some of it welcome, some of it funny, none of it onstage, but all of it very final. The most successful pieces for me were actually the ones without that – the unburdening of a heart in “Collide,” the father-son chat about mortality in “Fireflies,” and the unexplained assortment of oddities that comprised “The Differences Between Being Inside A Whale and Outside A Whale – A List.” The smiling face of madness in “The Spaghetti Incident” was the one touch of black comedy I most enjoyed.

“You made me a monstro-sexual!”

There’s a lot of wonderful writing here, no surprise. Sometimes it went too far, sometimes it didn’t go far enough, but it was always well-crafted, and well-performed. Honestly, it made me long to spend more uninterrupted time with one or the other or both of the writers, and just a handful of their characters. Which I guess is a good thing. Better to have me wanting more, rather than less. And this year’s scenario means no one needs to feel trapped in any one moment for very long. There’s always something new just around the corner. Other items we can look forward to which are part of the shuffle: “All I Have Pictured,” “The Curse,” “Hark, Hark The Arrival of Lemonseed Larry,” “Hot Pepper Paradox,” “Keep Shoveling The Walk: A Visit to the Northernmost Maine Museum of Maine,” “Night Train,” “The Opposite,” and “The Tiger’s Tale”

“That octopus is back.”

So if you’re looking for a showcase of good writing and acting, and particularly if you missed “Winnemucca (Three Days In The Belly)” last year and are wondering what all the fuss over Shelby Company Theatre was all about, well, this is mighty fine way to make their acquaintance. You’ll see a broad cross-section of the things they do and the way they do them, in Uncle Shelby’s Traveling Treasure Trunk