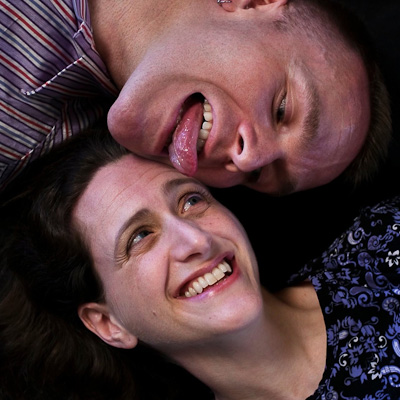 Wow. I Feel Like I Just Had Sex. Really Fun Sex.

I don’t think I have words to adequately describe how much fun this was. Or how sexy it was.

When you combine a group of dancers as lithe and limber as Sarah Jabar, Patrick Jeffrey, Jordan Klitzke and Ashleigh Penrod, with choreography by Rebecca Katz Harwood, and the music of Marty Winkler (backed by Tate Ferguson on guitar, and Kate Bordeaux and sometimes Harwood as well on vocals), well, damn. That’s “CorresponDance.”

A friend in the audience commented afterward that for a while they weren’t sure if it was a dance piece accompanied by amazing music, or a live concert that included dance. And I almost think it doesn’t matter. The music was so languid and lush, the the dancers’ bodies and moves so breathtaking, it all sort of assaulted your senses and seduced you from whatever angle you were willing to meet it. The yearning for connection was both aural and visual, the one constantly reinforcing the other until you almost couldn’t bear it (in a good way.)

I now need to go online and purchase Marty Winkler’s music. And take a cold shower.

If the first half of the show is about striving for connection, then the second half is all about getting it – and release. Phew.

“Thinkingaview” was the portion of the show I’d seen in a previous incarnation at the Bryant Lake Bowl, so I knew it was going to be good. But I’d forgotten just how joyful it was. The dancers from “CorresponDance” were joined by Megan Bridges, Bryan Gerber and Susanne Grochett, for choreography by Jeffrey Peterson. The live musical treats continued, taking a lot of old Etta James standards and giving them the Marty Winkler treatment (along with Ferguson, Bordeaux and Harwood again, with the occasional dancer picking up an instrument and playing along).

The three part overarching structure of this piece was the Etta James classic “At Last” – opening, then repeated twice, once in the middle and once again at the end – each time with a different pairing of dancers. A roll of the die before each show determines the order in which the audience gets to see them. The same moves, three very different and beautiful physical duets to a romantic ballad (which I just mistyped as ballet – Freudian slip). We got it in the following order – two men (Gerber & Klitzke) to open, a man and a woman (Jeffrey & Penrod) in the middle, two women (Bridges & Jabar) to close the show. When the two men came out, magnificently naked from the waist up, I knew I was in trouble. (I was, after all, sitting next to my mother for the entire show. It was a relief to realize she was just as transfixed for the entire hour as I was.)

The pansexual kissing festival began early, right after the first “At Last” with the jaunty Winkler ditty “What Would You Do?” The whole company of dancers, now in white shirts, colorful briefs, and that’s it, folks. The men’s shirts were often open and flowing in the breeze besides so, enjoy, everyone! And everyone was certainly enjoying everyone else. The couplings and triplings and quadruplings going on, and the contortions into which they were tangling themselves were more comical than sensual. You got the clear sense however, that everyone was having a lot of fun. And when one of the dancers broke off to wander into the audience and find herself a willing female partner to smooch, well, somebody fan me, please, it’s hot in here.

We would return periodically to the kissing dancer and her new friend throughout the evening. And lights would come up in other parts of the audience as well. In response, several audience members felt it must be all right to get a little frisky with their seatmates, too. Some were more vigorous than others. But I caught even a more mature couple in a quick, cute little smooch later in the evening.

Whether it was the bouncy “Two Sides To Every Story” with Bridges and Gerber playfully grabbing each other, or launching into one another’s arms to be carried; or Gerber again, this time in a long flowing dress to the tune of “A Sunday Kind of Love,” gender roles were constantly being tweaked. And though the audience started out giggling at Gerber in a dress, which he encouraged, once that body of his got moving, the leaps and twirls and undulations quickly pushed laughter aside, replacing it was appreciation for the human form in motion – regardless of what it’s wearing.

Laughs again, when Grochett appeared wearing the same dress, sending Gerber off in a huff. Grochett then had a great turn of her own while the singer crooned “Fool That I Am,” alternating being done with a faithless lover, and not quite being able to let the thought of them go. A dance of empowerment, with an undercurrent of sadness.

The Otis Redding tune “Security” found Grochett again, this time to more comic effect, trying and failing to inject herself into the midst of each of the three happy couples who would be dancing to “At Last” over the course of the evening. Try as she might, she couldn’t split any of them up. They all were enjoying each other way too much to be parted.

I know I’ve used the word sexy (and variations of the word sex) a lot in this review, but honestly, you go and see it and then try to describe it to someone else without using the word sexy. Or fun. Because it’s both. A whole lot of both.

I always get a little nervous when I make something #1 on my Top 10 List, thinking “Have I overestimated them? Will I really like it that much? Will other people like it that much?” Not only did I not overestimate Thinkingaview/CorresponDance, I think I may have underestimated it. It got a well-deserved, whooping standing ovation from a large enthusiastic crowd for its opening performance. I’m not alone on this one by a long shot.

Trust me. Treat yourself. Thinkingaview/CorresponDance is an easy Fringe show to love.