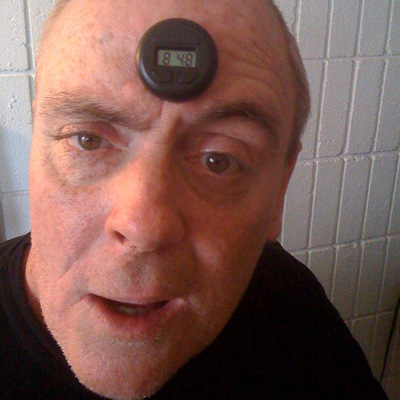 “If you want a happy ending, leave now.”

Brian Shaughnessy would probably hate my calling his Fringe show The Squeaky Wheel Squeaks inspirational, but if you forced me to choose one word to describe it, inspirational would have to be first in line.

“This was the warm-up preacher. The faith fluffer.”

A close second in line for a one-word description would be funny.

Yes, I’ll grant you, the true story of a man who walked into a hospital for surgery, and emerged from that surgery a quadriplegic does not exactly scream “comedy gold” to most people.

Brian Shaughnessy is not most people.

“How much does one person have to go through?”

This show is about as low tech as they come. Most of the time the lights are up full and Brian is tooling around the Rarig Arena space in his motorized wheelchair, with an inflatable pink flamingo, blue seahorse, and palm tree strapped on the back. He had a small but appreciative crowd on all sides and he made sure to face us all throughout his astonishing story.

“‘Children of a Lesser God,’ the first, and only disability play of any significance until…” (he gives us a knowing glance with a twinkle in his eye, as if to say, “You’re sitting through it right now.”)

The story is astonishing not just because of his tussles with the medical establishment, not just because of his battles with the body that no longer works the way it once did, not just because of what he accomplished after landing in that chair (a theater degree, law school, teaching, a book, a play, this performance, getting married, adopting a son [who we get to meet], being widowed and raising a child on his own), but mostly because this isn’t a “pity poor me” style of theatrical experience. And honestly, if anyone had a right to a little self-pity, it’d be Brian. But the guy’s just as hardy and prickly as the cactus he admires.

“They’re the rodeo clowns of the plant world. All the other plants are just mimes.”

Shaughnessy creates the characters of his family and other loved ones who went through this experience with him in simple vignettes. He isn’t looking for easy sentiment or cheap sympathy. He gets you to care about both him and those around him mostly because they just refuse to give up. Sure, hope is hard to come by, and a lot of the humor is of the gallows variety, but the man’s alive. And if you’re alive, then you should do as much as you can with the time and abilities you have. Oh, and for god’s sake, have some fun while you’re at it. Have fun with people who ask stupid questions. Have fun with people in general. And he does, and we get to be privy to some mighty inventive leg-pulling.

You can buy his book, by the way. He has it with him. (“If you don’t like to read, I have T-shirts.”) He couldn’t resist tweaking “the Fringe fascists” who wouldn’t let him sell his stuff, and tried to go ahead and sell it anyway. (Did he know Robin Gillette, the Executive Director of the Fringe, was in the audience for that performance? I’m not sure if it’s more amusing if he did or didn’t know. Lord knows I wouldn’t have the stones to say it in public either way.)

Though he spent a fair amount of his life in Minnesota, Brian is based in Hawaii now. So, as so often applies to the Fringe, this isn’t the kind of thing you get to see any other time of year. You should see The Squeaky Wheel Squeaks while you can. It’s a man who knows how to tell a story, and oh what a story he has to tell.