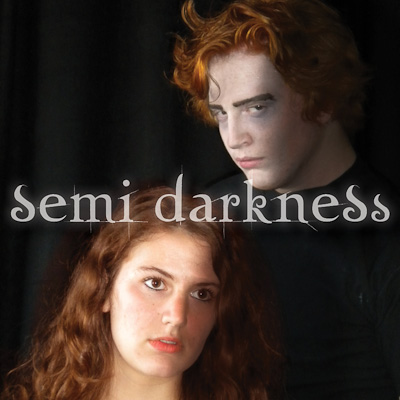 OK, let’s face it. You don’t go to a parody of “Twilight” because you want to improve your mind. You go to a parody of “Twilight” because you want to laugh at vampires and moody teenage girls and see at least one werewolf guy with a nice torso. Mom and I had seen Tom Reed’s “Bite Me Twilight” earlier in the week, but she was still in the mood for some supernatural giggling, and I can vouch for the quality of pretty much any show Youth Performance Company or their Youth Artists Council puts out, so off we went to the Ritz and Semidarkness delivered everything on the checklist and more. It’s not 5 stars because it’s Shakespeare or Chekhov. It’s 5 stars because it’s fun.

“I have some assumptions to make!”

Unlike Tom Reed’s “Bite Me Twilight”, Semidarkness focuses mostly just on the first book of the series, “Twilight,” rather than all four (it does roll a bit of book/movie #2 in as well, because love triangles between werewolves, humans and vampires are too tempting to resist, but the overall structure is “Twilight.”) In fact, it’s as much about the movie adaptation as the book itself. Much is made of actress Kristen Stewart’s rather limited range of emotional expressions, Taylor Lautner’s werewolf workout ethic, and Robert Pattison’s “serious actor” needs.

One of the things that’s so much fun about the production is its embracing of the high and low tech side by side. The title card projected pre-show on the back wall is a perfect send-up of the Twilight font of the movie titles. There are some great slides that serve to set the stage for all the locations, but any beds are just the same fold-up cot. And cars are painted cardboard boxes, not even meant to look like a car, which just hang from the actors’ shoulders on suspenders. If you have to climb in for a ride in the car, you have to wedge yourself into the box along with the driver. It’s ludicrous but amusing. Edward’s sparkly skin effect is just a mirror ball and a flashlight wielded by the another actor. On the other side of things, the costumes for the almost 20 person ensemble (by Anna Esposito) were all great. Visually they helped each character establish their own identity in the crowded storyline. Lights and sound were also well handled, and of course they had a big musical production number at the end, just for the hell of it (“Being A Vampire Sucks,” of course).

“This is so tense and sexual.”

And of course, you have to have the lame, but still funny, jokes when switching all the names around. Bella Swan is instead Stella Dawn (Maddy Fick), and her father (Mike Elder) uses this as an excuse to cry out “STELLA!” repeatedly throughout the show as if he was in a production of “A Streetcar Named Desire.” The town of Forks becomes Sporks. The Cullen family of vampire have their last name changed to Sullen. And so on. Throw in some random cameos from Blade and Buffy the Vampire Slayer and you’ve got quite the pop culture stew going.

“I live with my parents and my insanely attractive brothers and sisters who are all dating each other.”

The story remains the same. Stella falls for vampire stud Edwin (Jacob Krech) but he’s emotionally distant because he keeps having to resist the urge to kill her rather than kiss her. When he takes off, leaving her heartbroken, young werewolf about town Paco (Brandon Cobb) tries to give her a hand with the whole “rebound relationship” thing. Evil vampires (no really, their last name is Evil – Peyton Dixon, Catie Odde, Jesse Villareal) kidnap Bella, and everyone in Edwin’s entire family (Mary Katherine Fiala, Daniel Flohr, Sara Jensen, Sam Tank [also a co-director], Laura Titus, and Myles Wendt) must swoop in and save her. Except they keep getting distracted, so more and more of them keep having to show up. The (deliberately) inept rescue sequence eventually brings closure (and dancing) for all.

“I’m just going to go upstairs and cry about how dismal my life is.”

The script, by Maddy Heyman (also one of the co-directors) and Steven Lewer, is full of clever touches and playful satire. One of my favorite throwaway moments is when everyone flutters around Stella at the hospital over a minor scratch while someone else lies convulsing and dying in a bed nearby. Then, of course, on a detour to the morgue, the Sullen family snacks on the body. It’s nice for dad to have a job at the hospital so fast food is always handy.

Sure, Semidarkness probably isn’t going to change your life. But it helps you take all the “Twilight” mania with a big grain of salt. It’s also a hell of a lot of fun while it lasts. And you can’t say that about every Fringe show, can you?