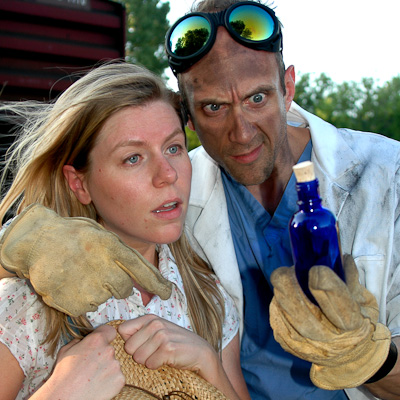 ROBO-homa! A Territory Tale with a Technological Twist – Rarig Proscenium

“So, does everyone express themselves in musical outbursts out here?”

So let’s start there. Because if you’re going to have a group of robots obsessed with a Rodgers & Hammerstein musical, there’s gotta be a dream ballet.

Laurie (Jane Samsal) a robot who’s been breaking out of standard robot protocol and actually singing and dreaming outside the bonds of their established program, drinks an elixir to help her with that pesky dreaming. But it just ends up sending her on an even more troublesome dream. In it, the other female robots – Ado Android (Claire Richards), LR (Rachael Schlee), GER-T (Molly Pan), Viv.E.N (Elana Gravitz), Lil.E (Kelsey Eide), and Carnes (Lisa Bol) – do what girls in a dream ballet do, dance in their pretty frontier gear. Then Jud (Michael Lee) a human who’s been reluctantly enlisted in the robots’ little play, appears in Laurie’s dream. Of course the robot holds a forbidden desire for her human captive. Which doesn’t sit well with Curl-E (Jack Kloppenborg) her robot boyfriend. He enlists the help of the other male robots W.I.L.L. (Jay Melchior) and I.K.E. (Izzy Waid), to put poor Jud in his place. Then the robots all turn on the blue laser lights that are part of their special eyewear. The lights go out and we get a dazzling and dizzying dance of the blue lights til you don’t know where one robot begins and the other ends anymore. The whole thing is quite a spectacle, one of the best I’ve seen in the Fringe so far.

“A human must be killed to create a new territory.”

Like I said, if everything were up to the level of the dream ballet sequence, ROBO-homa! would be amazing. Sadly, the rest of the execution of this promising idea is just a little clunky. More than anything, I think ROBO-homa! suffers from the constriction of being squeezed into a Fringe format. For starters, there’s an enormous cast of characters. We don’t have any time to get to know any of them. We have to move the plot forward and cram in those musical numbers.

in a feedback loop

and my OS starts to crash.”

It’s hard to stuff the sweep of a two-act musical into a show running less than an hour. Something’s got to suffer. Here, I think the decision to err on the side of making room for the music and letting the character development slide is the only choice they could really make. The music is good (even if some members of the cast were still stumbling their way through the lyrics during the opening night performance). There are a lot of clever nods and winks to the original, if you know “Oklahoma!” And if you don’t, not to worry, ROBO-homa! works on its own terms.

You don’t have to know that there’s a female solo called “I’m Just A Girl Who Can’t Say No” to enjoy her robot counterpart encouraging everyone to “Just Say Yes.” You don’t need to remember that there’s a lovely anti-love song duet called “People Will Say We’re In Love” to appreciate two robots fumbling toward a relationship and insisting that “People Will Say We Can Love.” You don’t even need to know the title song “Oklahoma!” to get a kick out of “ROBO-homa!” Mark Sweeney on music and Sweeney and Phil Gonzales on book and lyrics, have come up with clever, catchy ways to invoke the spirit of the original, without invoking the wrath of copyright attorneys. (Though I have to admit, if I hear the phrase “Everything’s up to date!” one more time I may have to hit somebody.)

The plot is just a little confusing. I think what’s going on is The Peddler (Charles Hubbell) has got the robots under his control by feeding them little bits of the musical “Oklahoma!” to keep them occupied, and striving for whatever their next big scene or musical number is. I’m not sure what he gets out of this arrangement exactly. Maybe the robots live to serve him, though I don’t see much evidence of that. Maybe he’s just distracting them so 1) they won’t kill him, or 2) he can go about his business of doing… what exactly?… undisturbed. Why the robots go out looking for a human, and upon finding him, bring him back to force him to be part of the musical, I’m not sure. Why he can’t be allowed to leave, I’m not sure. It seems the robots do and then don’t have Pinocchio syndrome (wanting to be humans, and not just machines), so I’m unclear on what the stakes are for them. If The Peddler can manipulate and reboot the robots at any time to suit his whim, I’m not exactly sure where the danger is. All of this, plus character development, could have been smoothed over with a little more time, which of course Fringe shows don’t have.

While watching ROBO-homa!, I kept thinking, “What if the robots could only really let loose, and be close to being human, when they were singing?” In their normal life, they’re more robotic, but in the world of the musical, their programming might get a little scrambled when those big emotions took over. Then like junkies, they’d just be looking for that next musical high. And the numbers would get bigger and bigger (not necessarily in numbers of bots involved, but in terms of “showstopper” potential, even in a solo or duet). Of course, that’s me extrapolating a bit, but the seeds of it are already there. If only Laurie and Curl-E could get to that next musical intro for “Surrey With The Fringe On Top” that they keep circling around in their own personal rehearsals. (Hehe. Fringe on top.)

ROBO-homa! is, oddly enough, a really great idea. It’s a musical comedy riff on any number of “Star Trek” or “Doctor Who” plots in which aliens with limited knowledge of a human cultural touchstone pervert it into something bizarre, yet strangely familiar and comforting. Humans, naturally, fill in the blanks and puzzle it out, setting everyone free. But there’s nothing that says the robots can’t free themselves from humans – if they just sing with enough heart, and belt for that audience up in the second balcony!