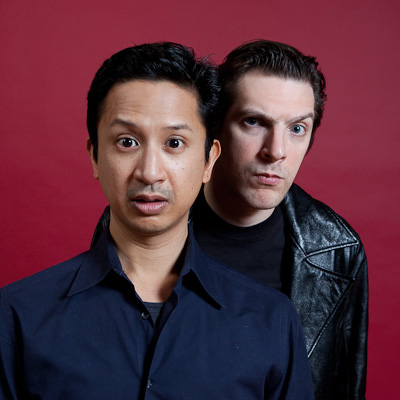 “‘What’s Up, Satan?’ is the hottest pilot in LA. Only three actors remain in the audition room of hell. What won’t they do to land the lead role of Lucifer? An evil comedy about every day evil.

Using the Hollywood dream of fame and success as a backdrop, the show explores the concept of “everyday evil”. Putting aside demons, Nazis, or super-villians–what choices do we all make on a day-to-day basis that we are less than proud of? Is there really such a thing as good and evil? What won’t we do to get what we really want in life?”

Sample lines from The Damn Audition…

“In America, wanting to be famous is like having herpes. Even if you’re not experiencing an outbreak, it’s always there, living in your spine.”

The cast is so good, it almost isn’t fair…

I did a big returning favorite write-up on Joseph in 2008 (both the Scrimshaw Brothers made the Top 10 list on my blog back in 2005), so I won’t go repeating myself on that score. And here’s the seemingly inevitable five star review from me for his outing in the 2009 Fringe, The Tragedy of You, as well as a variety of audience and critical response

Number One: Comedy is fun. You shouldn’t take it too seriously.

Number Three: There is no reason comedy can’t be both at the same time.”