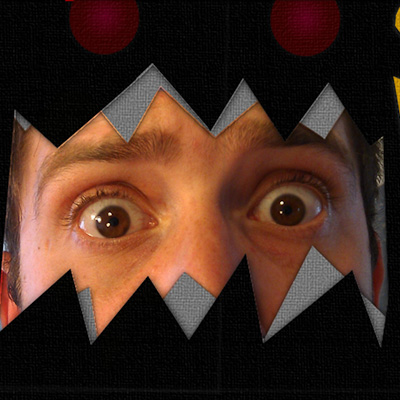 It’s a two-for-one deal on this returning favorite. Ben Egerman and Rachel Teagle teamed up as the Questionable Company Theatre to present Orange (a farce about terrorism) that landed on my 2008 Fringe Top 10 list. The show itself got a 4 star review out of me, and a wide variety of opinions out of their audiences.

Not long ago, Rachel moved down to Atlanta, and Ben remained here in Minneapolis. And now they’ve both got their own show in the 2010 Fringe.

Ben (as The Great Ben Egerman Theatre Adventure!) is currently touring his show Do Not Kill Me, Killer Robots! around Canada and the east coast of the United States, before he brings it back home to us. (You can follow along on his blog or facebook if you like)

So, about that show…

“The place is here. The time: the very near future. Humanity has been all but eradicated by a horrible robot army. Ben Egerman is the only human left. You are the robot army. Get ready.

Set in the very near future, ‘Do Not Kill Me, Killer Robots‘ presents a world where the entire human population has been reduced to one (namely, writer/performer Ben Egerman) by a murderous horde of robots. Locking himself in as secure a building as he could find, he prepares for the robots’ inevitable arrival. Luckily, he knows the robots’ only true weakness—the line of their programming code that inexplicably prevents them from killing during a one-man show. Presenting stories from the horrible robot wars and elsewhere, Egerman plans on enticing his audience with his own unique brand of absurdist humor, with healthy servings of sci-fi kitsch, lo-fi props, and some electronic gadgetry to taste. Learn what happens when all of your facebook friends join a group called “We Need More Grenades!” and become fans of either ‘The Book of Revelations’ or ‘Mass Suicide.’ Discover the magical and sexy origins of the robot hordes, what makes astronauts lonely, and the precise conditions under which an adorable kitten can win in a battle with a nurse shark. But most of all, discover the bloodthirsty automaton within, that you never knew was longing to break free.”

Rachel, this time around as a national Fringer visiting our fair cities, presents Rachel Teagle Believes in Ghosts

“Rachel Teagle’s new apartment is haunted. And she wants to tell you all about it.

She has always had a secret, nerdy interest in the supernatural, and moving to Atlanta with its decaying mansions and ever-present graveyards was like hitting the spectral jackpot. In this world-premiere solo show, she delves into her own haunted history: from California’s Winchester Mystery House to the disappearing cemeteries in Savannah. In exploring and conquering her haunted apartment, built on a Union Army campsite, Rachel discovers urban legends, murder ballads, unexplained phenomena and tales passed down from the women in her family who see ghosts. Through her discovery of the ghost in her apartment, Rachel explores many aspects of the super natural, from the spirit knocking of late 19th century mediums to the modern day ineptitude of ‘Ghost Hunters.’

These stories range from creepy to beautiful to ridiculous and are told through words, music, and dance. Rachel Teagle Believes in Ghosts is a wry journey through the supernatural with detours into the unexplained, the frustrated, and the ridiculous. While one needs not believe in ghosts to enjoy the show, anyone who has been relieved to learn they were not alone will connect to these stories from below the Mason-Dixon line and beyond the grave.”

Rachel also gets good kharma for directing Katherine Glover‘s truly fantastic solo storytelling show A Cynic Tells Love Stories in the 2009 Fringe. It was in the second half of my Fringe marathon last year and thus didn’t get nearly the praiseworthy electronic ink it should have from me. Man, I really loved that show. An excerpt of it performed at the Kick My Asthma benefit last week just reminded me of that anew. One of the best last year. Katherine Glover shall be front and center on any new Top 10 list when she does her next Fringe show, trust me.

For now, however, back to Rachel…

And here’s a bit of video from where this show was born (Rachel warns that there’s more swearing than normal because at the time she did this stand-up routine, she was still in college)