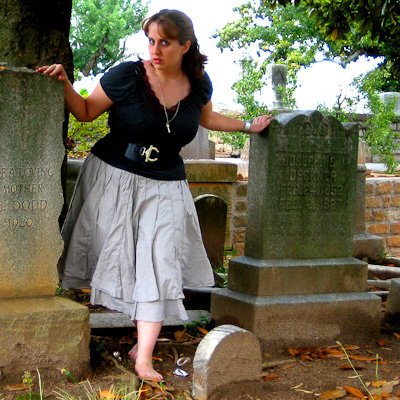 “When a pretty woman dies a gruesome death, what do we do? We sing about it.”

Rachel Teagle has pulled together a very accomplished Fringe showcase for herself. In fact, the only times it ever stumbles is because she is experimenting with yet another way to successfully tell a story. I’d much rather see a show that consistently tries and often succeeds, at swinging for the fences, than sit back and watch somebody just play it safe. Rachel Teagle never plays it safe, and we, and the show, are the better for it.

Rachel kicks off with a ghost story set in the Civil War era, then recounts her recent move down south, into an apartment that shows all the signs of being haunted. Also layered in are tales of her childhood obsession with the supernatural and her mother’s encouragement. One additional thing threaded through the narrative are stories of the Winchester Mystery House, connected to Rachel through a skeptical friend who once served as a tour guide there. The show jumps back and forth nimbly among these different storylines. Rachel establishes them all so clearly that the audience doesn’t get lost in the shuffle. Plus it helps keep us alert, and to never get too far ahead of where the storyteller wants us to be.

Rachel also does a great job of executing several different types of storytelling cleanly, without letting one spill into the other. There are the ghost stories themselves. There is Rachel’s personal story. There is the historical background of the various supernatural tales. There is even a use of repetitive movement that borders on physical theater. This last is sometimes successful, sometimes not. It works best when the repetitive movement is in concert with some recurring motif in the story she is telling. When the movement just seems layered on top of the story, rather than tying into and reinforcing it, it works less well.

“Watching the ‘Chicken & Biscuit’ and Pro-Life signs multiply like dandelions.”

Another experiment that didn’t pay off as planned was an extended, and I mean extended, sound cue, in which a phone message is played (I dare say in its entirety). While the person leaving the message certainly has her own distinctive personality, and tales of haunted hospitals are always welcome, I was reminded of what Hitchcock once said about making films – that movies are real life with the boring parts edited out. Rachel’s friend on the phone could have used a bit more editing. Or better yet, we’ve seen Rachel take on many a character here, why not just portray her friend, so we can get the benefit of actual live theater? I applaud the experimental impulse behind trying this, but it’s a moment that doesn’t work in a show that otherwise largely does.

“Not all of these ghosts were the ghosts of architects.”

And even though Rachel is in full control of the evening, even when she turns it over to her guest Fringe performer for a few minutes, the guest Fringer segment is only as successful as its guest Fringer. Sometimes they’re going to dovetail nicely with the rest of the evening, sometimes not. Ben Egerman (of Do Not Kill Me, Killer Robots! – another show you should definitely see) brought his banjo to sing the song of “Pretty Polly.” There is a line between intentionally dissonant for effect, and just plain out of tune. I love you, Ben. But I think you crossed that line. More than once. Still I love it when Fringers let other Fringers invade their shows and strut their stuff. So, better a mixed result than not to try at all.

Rachel Teagle is a returning favorite of mine for a reason. She’s got a wicked sense of humor and she’s not afraid to use it. But something I’ve learned from Rachel Teagle Believes In Ghosts is that she knows how to spin a yarn that’ll raise the hair on the back of your neck as well as make you chuckle. These are spooky, as well as personal, stories even a skeptic can enjoy. Because Rachel acknowledges that it could all just as easily be nothing. But what if it isn’t?