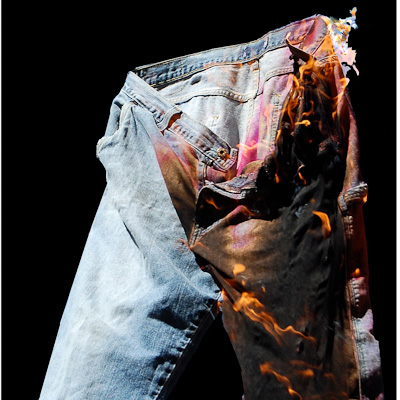 “We had lost a few hours due to the lemon debacle.”

Pants On Fire! is a great sampler of storytelling and spoken word all by itself, but there’s an added twist. Each of your storytellers – hosts Allison Broeren and Wonder Dave Crady, and their rotating roster of guest storytellers Les Kurkendaal, Courtney McLean, and Khary Jackson – will be telling two true stories and one that is a lie. And at the end, the audience gets to guess who was lying about what. In addition to the three stories, there’s a smattering of other random poetry and mini-stories, plus segments where the trio will each attest to the same basic premise (and once again, you get to guess who is telling the truth, and who is lying – sometimes they tell you, sometimes they don’t and just launch into the next story instead).

“Marilyn Monroe said that. What could possibly go wrong?”

These folks are all returning favorite with a great preview at Fringe-For-All this year that I was very much looking forward to seeing again. The night Mom and I attended, Les was the guest liar. Mom and I had a lot of fun, largely because Les and Wonder Dave and Allison were all having so much fun, with each other and with the audience. Plus, they just love telling stories, and they do it well. We were all sworn to secrecy about which stories were true and which were lies, but I can report on the amusing results of the audience polls without giving anything away. Suffice it to say, they’re great liars.

“I was once very close friends with a cucumber who loved Jesus.”

– almost joining the army, if he could just put on 8-1/2 pounds in less than a day. The strategies are not pretty.

– working as a mascot, in particular a zebra for the zoo, and befriending a young girl with cancer.

– his estrangement from his religious father, and his aching desire to bridge the distance between them.

[I don’t know why I’m surprised that Wonder Dave is often such a sentimental kind of guy, but damn…]

– being humped by an overexcited dolphin

– prostituting herself for a camera while visiting Japan

– he almost got his picture taken with Christina Aguilera

Two interesting moments occurred in the audience voting by applause at the end of the show. For Wonder Dave, silence greeted the mention of the story about his father. No one applauded because we all believed it was all too likely that he and his dad had a troubled relationship. Secretly, I’m sure we all wanted that to be the lie. But we doubted it.

For Allison, there was no applause for the Japan story. So we all totally believed she might have considered prostituting herself for the money to get a really nice digital camera. Wonder Dave cried out, “Her parents are in the audience tonight! You people are terrible.” Well, her parents didn’t clap either. Hee hee.

Pants On Fire! is a simple show, but done very, very well. I look forward to the Fringe every year in part so I can catch up on my spoken word and storytelling artists. Once again, they did not disappoint. It’s a prime example of how sometimes you just can’t beat live performance, and a person telling a good story, for great entertainment. Even if they’re lying to your face.