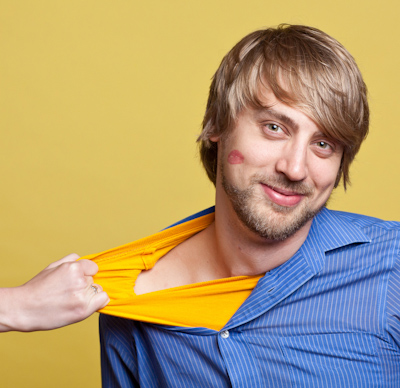 A Romantic Comedy That’s Actually Funny, and Romantic (almost in spite of itself)

Never has a fistful of confetti pulled out of someone’s pants been so romantic, funny, and painfully sad all at the same time.

I laughed out loud, a lot, during A Nice Guy’s Guide To Awkward Sex. And I am not a person who laughs out loud in public, especially during plays (which often makes me a problematic audience member for a comedy). I do a lot of smiling and nodding instead. So if you can get an audible chuckle out of me, that’s a major accomplishment. Full-on laughter or guffawing is almost unheard of. And I did all of those things during this play. This, despite the fact that I know both the co-authors – Ben San Del and Phillip Andrew Bennett Low – in real life, so they shouldn’t be able to surprise me so much that I actually laugh out loud. But clearly these guys have been holding out on me, because they surprised me at almost every turn in this romantic comedy.

“How did I suddenly kill a kitten?”

They’re going to hate me, of course, for calling it a romantic comedy because that genre has been (so often rightly) vilified in recent years for being lightweight entertainment. Well, this is a romantic comedy that’s romantic almost in spite of itself. For instance, never has swearing been quite this adorable (thank you, Natalie Rae Wass as Sarah). Nervousness here is almost unbearably cute (thank you, every one of the neurotic cast of characters). Word play for these characters is foreplay, and banter is heavy petting. The brain is as much of an erogenous zone as any other body part for these four stand-up comedians looking for companionship, sex and love (if they can just clear the enormous hurdle of that first date).

“That’s why I always carry popsicle sticks and duct tape.”

Frank (Low), Charlie (San Del), Sarah (Wass), and Audrey (Amber Preston, who contributed all her own hilarious standup material to the proceedings) are all aspiring stand-up comedians. Sarah can’t get up the nerve to actually take the stage at an open mic, though she’s been trying to get up her nerve for weeks. She’s also been trying to get up the nerve to ask Frank out on a date. Amber, meanwhile, is determined to bed Charlie, even if it means promising him sex along with an assurance that she will dump him later before things get too strange between them.

Sarah does date Frank, and it goes surprisingly well. Sarah also finally steps up to the mic, which goes less well. Amber and Charlie manage to navigate “friends with benefits” quite handily, until Charlie accidentally spills the fact that he loves her. The thing that makes all this “who’s kissing who” stuff work like gangbusters is all four of the actors embody their characters with so much humor and heart. Each one of them in their own way is so smart and funny and yet completely incapable of appreciating themselves as such (or thinking anyone else might find them interesting), that you just want to give them a hug. And then shake them. They so utterly win you over that you can’t help rooting for them to be happy, and happy together, and you ache for them when they stumble.

“Your grandmother seems like a wise and strangely arousing woman.”

These characters are funny in their lives both on and off stage, but the reason they’re so consistently funny is that all the laughs are based in character. Even when they’re telling jokes and deflecting the barbs of hecklers, you know it’s coming from a place of personal experience. The audience doesn’t get the feeling that the writer is out there, pulling the strings and forcing the jokes. Also, because this is written by a couple of comedians, they understand the structure of jokes – set ups, payoffs, callbacks – and apply that structure to the overall play. “Normal” playwrights should see this and take notes. The nuts and bolts of the thing are so meticulously calibrated it’s almost not fair to the rest of us who are stumbling around in the dark trying to throw a few words against each other to see if anything sticks. Learn from a couple of clowns.

“Most people think I come off as creepy when I try to act civil.”

Oh, and learn from a mime. Mime is played at first for laughs, but the mime will always have his day. That’s all I’m saying. If he can’t sling the insult himself, he’ll pull someone from the audience to do it for him.

“You want me to call you Tarzan you better learn to play in the jungle.”

Ben San Del is a returning favorite who’s always tops on my list for a reason. He delivers. He’s never satisfied with repeating something he did before. He’s constantly trying something new. And the Fringe provided him with the safety net to go out and try something potentially terrifying – writing and directing his first play. Damn if he didn’t get it right the first time out of the box. (With ample support from Low and Preston and Wass, of course. This is one kickass writing/acting ensemble, probably one of the best in the Fringe this year.)

“I like to live like very day is my second to last. Which means I’ve gotta go home and take a nap because tomorrow is going to be very busy.”

There’s a lot of laughs. A lot of tenderness. A lot of bruised hearts and egos. And just a whole lot to love here. It’s nice when something that so clearly deserves to be a hit, looks like it’s going to get what it deserves. The crowds are big and enthusiastic, so make your reservations or get there early. A Nice Guy’s Guide To Awkward Sex is gonna pack the house. And so it should.