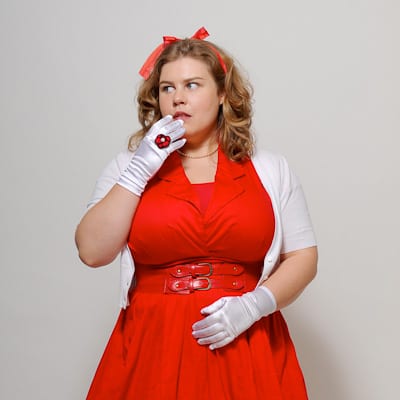 Tracking Down A Con Man Father

Missing: the fantastical and true story of my father’s disappearance and what I found when I looked for him – Intermedia Arts

“I remember looking at my hands until my skin disappeared and there was nothing left of me but water.”

Jessica Ferris comes from a line of women with an uncanny knack for falling in love with men who are not what they seem to be. In several cases, these men are outright con men. One of those con men in Jessica’s grandfather. And another is her father. Her search for him, and the things she learns about the women in her family along the way, are the meat of Jessica’s Fringe show Missing: the fantastical and true story of my father’s disappearance and what I found when I looked for him (hereafter known as simply “Missing”). All the things that landed Jessica on my Top 10 List this year were on full display. It was great to finally have a chance to share Jessica with Mom, who described the show as “intense.”

“When can you say two people ever feel the same way about each other?“

The play starts, however, with a fine example of Jessica’s physical comedy work, where as a child in search of her (also) missing invisible friend, she worms and wiggles her way through the seemingly impossible task of climbing through the open space in the back of a folding chair. This establishes up front that Jessica is not afraid to look silly, but a woman of such steely determination even in ludicrous circumstances, must also be taken seriously.

“It was years before I could do laundry without feeling nauseous.”

The finely realized physical performance work continues – this time aiding Jessica in creating the personas of her mother, aunt and two grandmothers. The great thing about these human pieces of the puzzle is that there is no need for Jessica to introduce, or reintroduce, them to us. She simply launches into each character, and quickly in the course of conversation, their identities and place in Jessica’s family tree become clear. The precision of gesture and posture, modulation of voice, and force of personality make each of these women immediately distinct from the others. And each testimonial piles upon the ones before it, revealing a fractured family history which can never fully be put back together again – men who can’t be trusted, who nonetheless gain, then betray, the trust which they are given.

“About one in 25 individuals are sociopathic.”

The setting and prop needs of Missing are so slight – a chair, a laundry rack, a laundry basket, some hanging linens, a book, a metal box, a small folding table – that Mom began to wonder, “Why is she at Intermedia?” This becomes clear at the end, when Jessica comes face to face with video evidence of her father, under one of his many aliases, on the evening news. After hearing so much about the man, seeing him, larger than life, gives us a little of the impact he must have had, even in his absence, over Jessica’s life these many years.

“My first date was an Eagle Scout, who’s currently on trial for killing his parents.”

Those sheets hanging on the spinning laundry rack serve as a hiding place, a repository of the twisted family tree, and even take on personality when the metal box becomes its talking head. That metal box has a series of magnets and small metal objects which transform it into a face with recognizable expressions, and even a singing mouth. When some of those linens come down off the line, one of Jessica’s female relatives wields those sheets and the folding of them with sometimes violent military precision. These are not women you want to mess with, they’ve been messed with quite enough.

“I’ve come all this way and I could have stolen it myself?”

Missing is a fascinating, humorous look into a family that you are quite glad is not your own. But they’re a mesmerizing bunch of ladies to hang out with for an hour. They’ve been knocked around a bit by life, and love, but the thing you really admire about them is how they keep going. Jessica Ferris‘ search for her father has instead fashioned a fitting tribute to the women in her life.