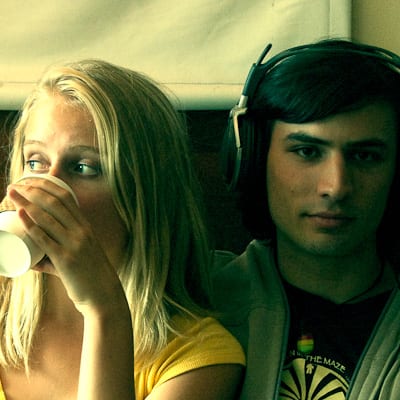 Another Cup of Grind, Please!

If you want to see a cast of eight ridiculously talented and adorable young singer/actors who can also play instruments *and* do shadow puppet work, stop reading this review and go make a reservation for Grind: The Musical (or get your spot in line *really* early), because the thing is selling out and packing them into the Rarig Xperimental space. This crew knows how to do a musical right. I had them in my Top 20 this year for a reason, and they didn’t disappoint.

In fact the only thing that’s wrong with Grind: The Musical is that there isn’t time for more of it. So the multitude of characters and subplots feel just a little bit cramped or rushed here and there. Oh, you can follow it just fine. In fact, the story, for all its twists and turns and tangents, is still pretty straightforward. I just found myself wishing that the whole thing had a little more room to breathe. The characters and their relationships are all so charming that I wanted to spend some more time getting to know them. But what I did get to know, I very much liked. Writers Laura Stratford, Alex Higgin-Houser, and David Kornfeld have crafted a clever little musical, and Higgin-Houser’s direction makes great use of every inch of the Rarig Experimental space.

Caroline (Maia Rodriguez) runs a coffeeshop in order to help put her musician brother Dylan (Kornfeld) through school, since their parents have died. But the building the coffeeshop is in is set for demolition, and Dylan has stopped going to class. Meanwhile, their employee Perk (short for Percival) (Maxwell Collyard), is a refugee from New Orleans who lost his family in Hurricane Katrina, and just wants to get back to warmer climes and pursue his dreams of being a rapper. Regular costumer Libby (Siri Hammond) is secretly the artist behind an insanely popular cartoon, culled from the conversations around her in the coffeeshop. She also has a crush on Perk (but really, who doesn’t?) Among the other regulars is Daniel (Alec Scott), a street preacher, who may hold the key to more than one kind of salvation. The chorus (Cari Jones, Daisuke Kawachi, and Stratford) fill out the community which passes through the coffeeshop.

Mom loved the voices and the way they blended – she was particularly impressed by Rodriguez and Hammond. There’s not a lot of room to dance but Julia Barlow’s choreography is still playful and fun. Kudos also to Jenny Fink their stage manager because this cannot be an easy show to run (and tour – they’re on the Midwest Fringe Circuit this year). There’s a lot of moving parts, and delicate musical instruments, to juggle and the whole operation looks pretty seamless.

They enchanted me right out of the gate with their shadow puppet introduction – passing streetlamps on the highway, then under the Minneapolis highway sign, leading to the skyline, leading to a building, and… we’re here in the coffeeshop. Simple, but brilliant. Cheeky scene introductions like “Secrets Are Revealed” just add some extra fun to the mix. I appreciate the many different kinds of theatricality they’re playing with here, in the context of a musical romantic comedy.

Some of the writing is pretty sharp, too. Both Mom and I were particularly fond of the way the street preacher Daniel was handled by the script. He could have just been a fire and brimstone breathing loon – that’s what most Fringe shows would have done. Not Grind. A modern day parable he unspools late in the action is pretty stunning, and his solo, “The World Ends,” is not at all what you think it’s going to be. Plus, who doesn’t love a musical that rhymes “heavenly host” and “French Roast?”

Trust me, you want to find a way to squeeze yourself into the Rarig Xperimental Theater space to catch Grind: The Musical. It’s a hell of a lot of fun.