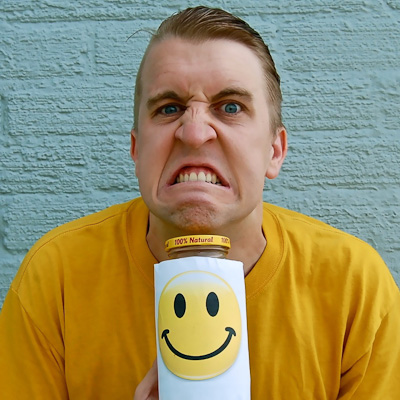 Another pleasant surprise in the Fringe-For-All previews…

“Rudolph Happy is a kid with a dream. He has invented an amazing tasting sauce that is sure to win him fame, fortune and (most importantly) recognition from the girl of his dreams. But on the day of the big meeting with a potential investor
(a paranoid used car salesman fearful he’s being targeted by Al Qaeda), Rudolph’s roommate suddenly drops dead after one bite of the sauce. Now, Rudolph and his best friend are in a race against time to solve the mystery of the sauce before their dreams reach an expiration date.”

Well, it’s a new play, but not fresh out of the wrapper, because this is to be the midwestern premiere. It’s been done elsewhere (east?), and managed to land some online coverage…

“Pleasantly saucy, zany and over-the-top, Happy Sauce is a fast-paced satirical farce driven at turbo speed…a roller coaster of one crazy event after another…before you know it, you feel exhausted from the ride.”
-nytheatre.com

“A tale of greed, addiction and love…high energy and hilarious…
-hyreviews.com

Playwright/performer Ben Lewis (the blond in the video below) was joined in the preview by Eric Powell Holm. After several years immersed in the classics with Shakespeare on the Cape, and The Strange Capers, I have to say it was weird (but fun) to see Eric onstage saying something that wasn’t in iambic pentameter written several hundred years ago. Also along for the ride, Ben Gansky, aka The World’s Cutest Corpse, who started the preview by wandering out, tasting the Happy Sauce (no, that’s not a euphemism), and then promptly falling down dead without saying a line. Wacky antics ensue with Eric and Ben Lewis (the non-dead Ben), as they try to figure out how to work around a dead body in the kitchen when meeting with a potential investor for the (deadly) Happy Sauce. Suddenly, the World’s Cutest Corpse lurches back to life and gives us the cliffhanger questions, “Will the mystery of the sauce be solved?” etc., concluding with “Find out all this and more at Happy Sauce. RARIG. ARENA.” Then the World’s Cutest Corpse drinks in the applause and flirts a little (shyly) with Robin Gillette on his way offstage because, hey, dead guys need love, too.

Fringe For All preview