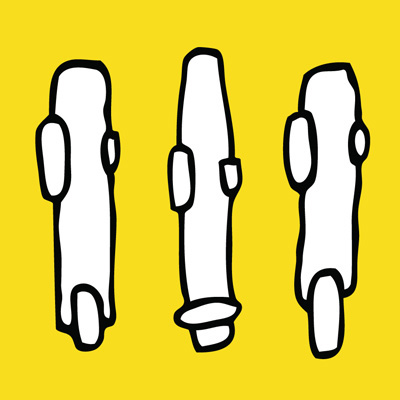 Blake E. Bolan, part of the brain trust behind Savage Umbrella, which produced Love Me Or Die, #1 on my 2009 pre-Fringe Top 10 list, and one of only two shows in the Fringe I saw more than once because I loved it so… Blake, who was also part of what made my little blue foot play Two Left Feet so wonderful as part of the Museum of Bad Art Plays at the Bryant Lake Bowl last year, emailed me out of the blue to say…

“I’m writing from the other side of the world: I’m teaching English/adventuring in South Korea, and I’m missing the Fringe vibe like you wouldn’t believe.”

“They are a group near and dear to me, they’re to blame for getting me performing, writing, and thinking the way I do.

The Manhattan Experimental Theater Workshop is an educational program based in Manhattan, KS that teaches experimental and avant garde theater to high school students. After studying movement and staging techniques, as well as reading some of the masters, the students choose a well-known story to write and perform under the influence of the styles they have studied.

When I was 13 years old, I signed up, not having a clue what I was in for. By the end of the first day, we had sweat, we had wailed like banshees, we had read Artaud and Foreman, and little did I know, my life had changed forever. Needless to say, all of my current passions in the arts are tied directly to what I learned in the years that I wrote and performed with that group, and later when I went back to direct.

The group performs in the first week of the Fringe, since they are an out of town group, and if you had a chance to see their work, I think you wouldn’t regret it. I know you’re a buuuuusy bee during the Fringe, but I wanted to give you a head’s up. Their intelligence and hard work are a delight.”

(“Is there any other kind?” commented Robin Gillette when reading their introduction.)

explore the story of Aladdin and the Magic Lamp from the Arabian Nights. Using the techniques of Ntozake Shange, Betsuyaku Minoru, Harry Kondolen, Peter Handke, and the dadaists, they have created a collage of provocative works full of fascinating soundscapes and movement that defies physical limitations- pushing their minds and bodies to the edge to create a performance of astounding passion and infectious abandon.

Wealth, Regret, and Sacrifice, explores the confusion of Aladdin’s mother as she tries to reconcile her son’s behavior towards her with her hopes and sacrifices for him.

The Sword in the Bed, explores interpersonal relationships and how they are affected by shared trauma, dissonant memories, and ritual as Aladdin and his wife discover an old relic that dredges up uncomfortable memories from the past.

In I Tell, Scheherazade tells of her personal struggle to defeat the Sultan, whose revenge hardened heart consumes him, threatening the lives of women everywhere. She uses rhythm and dance to conjure characters for her stories and survive in a world where greed begets power, as power begets greed.

The Manhattan Experimental Theater Workshop (MXTW), created by Dr. Jim Hamilton, professor of philosophy at Kansas State University, in 1989, is a program of the Arts Center of Manhattan, Kansas. It is a 5-week workshop for high school students. Part classroom and part production-company, participants study various styles of avant-garde theater, then write and perform original pieces under the influences of the styles they have studied. MXTW empowers participants to make strong creative choices, engaging an audience as abstract, intelligent, and innovative as they are. MXTW will astound you with their perception, innovation, and passion.”

Considering some artists’ DVDs sent to the Fringe didn’t work at all, and others, while entertaining, had wonky sound quality at best, The Manhattan Experimental Theater Workshop‘s video preview was all the more impressive. Well edited, with some low grade special effects, a combo of video and still photos, with lots of subtitles, it guided us through their process of gathering and studying and creating a show, all in under 3 minutes. The only “live theater” accident of fate was the fact that the blacks on the stage were hung in such a way that they bunched up in the bottom left corner of the screen, which is the corner of the screen were most of the subtitles started. So “We did this,” or “We did that” came off looking like “e did this” and “e did that.” No worries, the audience was able to suss it out for themselves.

The process involves the study of high-brow theater names I haven’t heard or used in conversation since grad school, if then. All of which might be a warning sign that the whole thing was hopelessly pretentious (not to mention the “we’re too cool to use capital letters, just like e.e. cummings” title). But I trust Blake’s assessment. And the slickness of the video presentation is equally impressive in their favor. If they can get their act together enough to trot out media like that, imagine how finely tuned the show is likely to be.

I haven’t a clue what the heck their show publicity image is supposed to be. Since the show deals with Aladdin it could be three gizmos for the three wishes. They don’t look like three magic lamps (and besides, there was only one lamp). The piece is in three parts so it could be representative of that. Maybe we should have a guessing game and then corner one of the artists and force them to tell us. And then I’ll feel foolish because it’s so painfully obvious that I’m missing it.