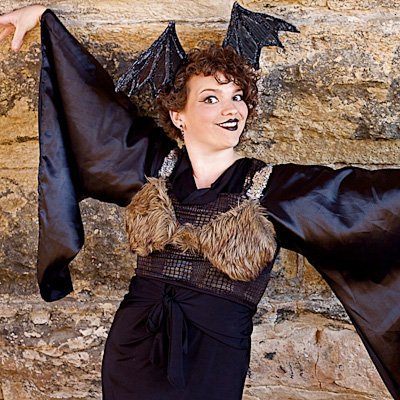 This is an example of a show that had a high hurdle to clear for me during its Fringe-For-All preview, and I was pleasantly surprised when they pulled it off…

“Do some spelunking with Batmama and Jimmy as they welcome Mumuseleh, Popwitch and the Scientist in a musical sideshow attraction! Batmama delivers a little song, a little dance and little bats in her pants.

This campy cabaret late-night talk show features original music and an international cast of physically dynamic characters. Batmama (no relation to any bats currently on the market) invites you to ‘jump in, come on, get batty’ providing you with your own set of batwings and a catchy tune to do the Bat Dance with the people next to you. Explore the depths of the cult genre and find your subterranean bliss!”

This description is an improvement over the first one, used during the Fringe Lottery…

“Batmama and her musical counterpart, Jimmy, perform songs and exchange banter as Batmama tries to convince the audience she is really a bat, a star, and a mother.”

For some reason that was setting off all kinds of red flags for me. And then I saw their Fringey Award video entry

The high-pitched trilling, the strange accent, the evil laughter, the Fredericks of Hollywood Halloween outfit, the combing of the breast hair. Yikes.

I’d pretty much written the show off, even though Joel Sass, Associate Artistic Director, The Jungle Theatre, of all people had this to say in praise of them on their page…

“If I could only catch one Fringe show this season, it’s going to be Batmama! Teresa Mock is talented, funny, fearless, and an artist to watch on the Twin Cities performance scene. I hope everyone hops in their Batmobile and makes the trip to her lair. Backed by her posse of retro-chic vaudevillians, Batmama is going to be a scream!”

I was bracing myself for the Fringe-For-All preview, and then a funny thing happened. I actually enjoyed it…

The trilling was still there, so was the outfit, so was the accent, but for some reason Batmama actually grows on you in a longer format.

Plus, there were many goofy dance moves, and her sidekicks. The Cigarette Girl who nervously set up the keyboard and then ushered out the piano player was delightfully odd.

Jimmy, tied to a rolling chair and forced to play accompanist to Batmama’s musical numbers, nearly the stole the show. He’s the highest maintenance hostage ever. Growing impatient with Batmama’s big windup, he bellows “Just tell them you’re a bat!” And when Batmama wants to move Jimmy and pulls his chair from the keyboard, he looks very put upon. “Pull the cord!” he cried as they got the keyboard in his lap. Then Batmama yanked a little too hard on his ropes and down Jimmy went on his rear, thankfully breaking the fall of the keyboard in his lap. And… off they scurried at the end of their time.

“I sense I am being upstaged,” said Robin Gillette as the audience laughed when Jimmy was rolled out on his chair. Don’t worry, Robin, Jimmy was upstaging a lot of people, but it all seems to be part of the master plan.

All this, and characters named Mumuseleh and Popwitch besides. I start to find all of this strangely charming. If you’re going to be this weird, it’s best to commit to it with enthusiasm, and that they do.

The tradition of busking, or street performance, is very much embedded in the fabric of vaudeville and the real life developmental journey of Batmama parellels the journey of the performers who were hawking their wares on the early 20th century vaudeville circuits. Director/performer Teresa Mock began developing Batmama while she was broke and busking as a singing mermaid on the banks of the Thames. At the time she was also studying at LISPA (London International School for Performing Arts), a Lecoq-based physical theatre training program. In response to a provocation offered by an instructor to come to class as a “creature of the night” for an exploration of the cabaret genre, Mock arrived with batwings sprouting from either side of her head and no further plan. The act she presented began as nothing more than a chirping sound and a bizarre get-up, but before an audience Batmama began to emerge.

Performers of the vaudeville era sought to push the boundaries of performance and took great personal and artistic risks in doing so. Batmama takes its own liberties by merging the musicality and mood of a campy cabaret with the structure and form of a late night talk show. The character of Batmama herself largely draws influence from the “cult genre” (see also Pink Flamingos, Hedwig, Rocky Horror Picture Show, Myra Breckinridge as well as stars like Mae West and Marlene Dietrich.) Vaudeville was a performance institution that, unlike the traditional theatre houses and opera of the day, often features the acts that prized the unique personalities of individual performers, and it is with that spirit of ingenuity that Batmama is presented. Batmama celebrates the best of what the old vaudeville shows had to offer: a fierce sense of humanity, originality and sensationalism.”