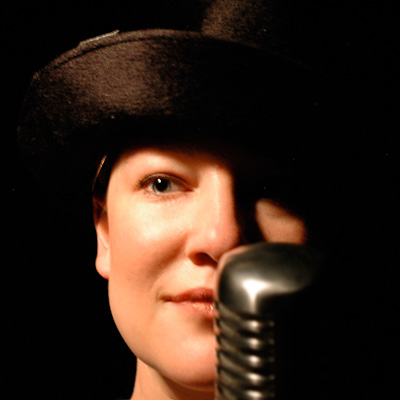 “I May Fly is based on the life of May Pusey, an Australian radio, tv and stage actress who was determined to follow her dreams despite the Great Depression, World War II, childbirth and great personal difficulty.

In this solo performance, Amy Schweickhardt portrays May from the age of 8 to 80. Beginning with her days at catholic school, the story takes us through May’s life.

Written by May’s granddaughter Felicity, this play has previously been performed in Australia, London and New York. This is its regional debut.”

“Sometimes she gets nervous and turns herself invisible. Don’t be mean, she really is there.”

The main things this show has going for it is an interesting true-life subject, and the boundless energy actress Amy Schweickhardt. The preview shows she’s got a good multifaceted role, and plans to make the most of the opportunity. I’ve missed her two previous Fringe outings, but this year I may get to correct that.

“Born in Subiaco, Perth as the youngest of six in an Irish Catholic Family, May was left to her own devices playing pranks, jokes and exchanging chocolate from her mother’s shop in Subiaco for maths answers. In a time when children were seen and not heard, May found a way to get laughter and applause. Cheeky, naughty, unconventional and deeply wounded by some tragic realities, imagination saved her.

We commence our play on the night before May’s 8th Birthday. She sets out to celebrate with her imaginary friend Phyllis, inviting everyone in the street to a wonderful party, full of poetry, dancing, singing and cake! ‘Even though Mum doesn’t have a penny to spare to feed a family of 8, I am sure God will make it happen! Right?’

In the imaginary Phyllis, May has company, an audience and a trusted friend to talk through real and tragic problems. May becomes a young woman and can’t tell anyone! She doesn’t know why she is bleeding and assumes that she is being punished for her practical jokes and naughtiness.

Having become a woman, Phyllis disappears. Without her imaginary friend to guide her, she finds theatre, radio and subsequently television; a way to escape, a way to play, a way to survive the pain and grief of abuse, war, pregnancies, miscarriages and a difficult marriage.”

Normally, I’m not a fan of art portraying the trials and tribulations of artists (as if they’re more important somehow than, say, nurses or fireman or teachers), but if the story is about an actual human being first, and an artist second, that goes a long way toward breaking down my resistance to the genre.

[Side note – I was talking to someone yesterday about a show that was sort of the worst example of this sort of artistic navel-gazing. It’s a musical about a couple of guys trying to write a musical. “It’s like masturbation, only with singing.” Sure, the tunes are catchy. Sure, the lyrics are clever. But about 30 seconds into every song on the cast album I listened to, I found myself shouting, “Oh shut up!” “Making art is so hard.” Who cares? This applies to many true stories, but even more so to artist stories – just because it happened to you, doesn’t mean it’s interesting. Just because it’s true, doesn’t mean it’s a good story. No one cares about your process. On stage, I don’t want to know how you make art, I want to see the end result. If you’re stewing in your own intestinal juices because you’ve got your head so far up your own a** that you can’t see the world around you anymore, then I’m probably not your audience.]

But here, in I May Fly, it looks like acting is a part of May’s life, not her entire reason for existing, or the only interesting thing about her life. And the line from adventures with an imaginary childhood friend to creating stories to be acted out for others is a short one.

This one didn’t leap out at me as a must-see on first reading, but after seeing a sample of the way it’s to be done in the Fringe-For-All setting, I’m intrigued. I like a good story, told well, and this one’s looking promising on both counts.