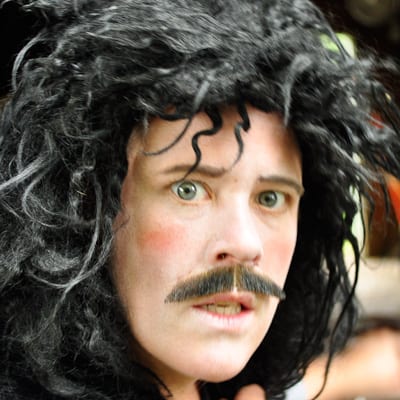 Even if they weren’t already the guardians of Fringe Central welcoming us all with open arms (and beer taps), I’d love this Fringe-For-All group for their theater work alone…

Superlatives of Excellence: A Jamboree of Breviloquent Masterworks by Josef Evans

“A self-proclaimed genius performs odd plays in his grandparents’ garage. Interlopers disrupt his plans; rampant peculiarities ensue. From the folks who brought you ’06 Encore hit ‘Love in a Time of Rinderpest.’

Bedlam returns to the Minnesota Fringe Festival this year, once again collaborating with playwright Josef Evans. The last Fringe pairing of these two very fringe artistic visions gave Festival audiences one of the year’s most popular productions, resulting in an appearance in the Fringe Encore at the Guthrie.”

Charles Bronson answers the phone, and agrees to an assignment, “I’m dead but I need the work.”

It’s a good sign when a Fringe-For-All preview has me scribbling notes like mad because I love so many of the lines.

“It’s those goddamn ninja astronaut feminists!” (They’re headed for the local library!) “Think of the reading they could do!”

It’s also a good sign when I start to get a little nervous scheduling, thinking about a show, “I have to see that. How do I make it fit in the schedule. I can’t miss it. I have to see that!”

“There are many fine Catholic romance novels.”

Both of these things happened with Bedlam’s latest Fringe offering, Superlatives of Excellence: A Jamboree of Breviloquent Masterworks by Josef Evans.

“I’ll shoot a cat if it’ll make you feel better.”

Reading the slightly expanded version of the synopsis makes a few things more clear (not that they needed to be. I often trust Bedlam not to make any sense in the moment, because eventually, they always do)…

“For Superlatives of Excellence: A festival of breviloquent masterworks by Josef Evans, local playwright Josef Evans presents himself in alter ego form, as ‘Josef Evans,’ a self-proclaimed genius who lives in his grandparents’ garage and performs festivals of his (mercifully) brief oddball comedies for anyone unfortunate enough to pass through its massive 2-car door. Having spent his meager budget on an irritated and incompetent wedding band, he is forced to employ garage detritus as actors in a desperate attempt to bring his vision to life.”

[Blogger note – which answers my question, “So, why when they show up are the ninja astronaut feminists portrayed by a rake, a snow shovel, and a broom with eyes?”]

“A parade of interlopers further disrupts the show and finds itself drawn into Josef’s singularly ridiculous universe.

This show brings back many of the most popular short plays Evans has presented at Bedlam over the years. Highlights include ‘What God Said on Tuesday,’ which recasts God as a demented old apartment-dweller tormenting his downstairs neighbor Satan with endless renditions of off-key banjo numbers, and ‘Modern Library Situations,’ an epic battle to save the Marcy-Holmes community library from ninja astronaut feminists in search of Catholic romance novels. The style is in keeping with the bizarre hilarity that has been a Bedlam/Evans trademark, from 2006’s Fringe Encore hit ‘Love in a Time of Rinderpest’ to ‘The Turducken,’ an adaptation of Chekhov’s ‘The Seagull’ as a Christmas musical spectacular.”

The wonderful crew of Bedlam is a returning favorite of mine from my 2007 pre-Fringe Top 10. Mom and I both enjoyed a little Shakespeare in the parking lot when they did William Shakespeare’s Hystery Queene Margaret

I managed to miss “Love In A Time of Rinderpest” in Fringe 2006, but caught it at the Guthrie encore – “full to bursting with Bedlam regulars – …hilarious oddness (murderous lovelorn cardboard boxes, dead-on Springsteen impersonators, drag and gender confusion, bewildering accents and set pieces) that is the Bedlam trademark. If not, well, doesn’t that sound like something that’s worth the visit, if only to figure out what the hell is going on?” But critics of all stripes have been praising them year round for some time now, and rightly so.

I missed another one with You’re No Fun during Fringe 2008, but managed to catch up with them again last year for more Shakespeare in the parking lot with Comedy of Errors. That was another show late in the going for me – Saturday of closing weekend, show #48 of my 56 show run (phew). But Comedy of Errors was another one to recharge my theatergoing batteries.

Just like when they crammed all three Henry VI plays together into a Fringe-sized package with Queene Margaret, Comedy of Errors benefitted from the streamlined Bedlam approach. It’s a convoluted plot with two pairs of twins and all sorts of family, criminal and romantic misadventures. One of many smart touches by director Jason Ballweber was to not even attempt to cast actors that looked alike for the twins. One pair was Maren Ward and Elise Langer (both back for Fringe 2010), the other was Billy Mullaney and Jon Cole. The only things the twins had in common was their costumes. Suspension of disbelief begins early, and continues. Because all the other characters in the play believe the twins are identical, we go along.

Broad strokes of character and comedy, played at full tilt by people who understand what they’re doing. If it didn’t quite hit the same peaks as Queene Margaret, that’s only because it had flimsier material to play with. Comedy of Errors was essentially just a romantic comedy, and one of Shakespeare’s earliest plays. Though the Henry VI’s, too, were early works, they had the sweep of history to back them up, plus the shadow of Richard III hanging over them when Bedlam went about mixing them all together. Comedy of Errors was good, light fluffy fair for a summer afternoon – a nice romp with old friends, both Shakespeare and Bedlam. I’ll be seeing a visiting production of The Comedy of Errors early next year, but I doubt I’ll understand it better, or enjoy it more than I did at the Fringe. Really, they’ll be lucky to be just as good.

This year, not only do we have the dependably entertaining antics of Maren Ward and Elise Langer back again, but I have three other reasons that hit close to home for a show I already wanted to see anyway.

In the cast are Tom Lloyd and Carly Wicks, and offstage as Assistant Director is Johann Hauser-Ulrich, all of whom comprised the cast for a little short of mine in Commedia Beauregard‘s Rembrandt Plays earlier this year at the Bryant Lake Bowl. The play was Time Lapse and they all did right by me, so I feel like the least I can do is catch another of their shows in return. If they’re involved, I’m looking forward to it all the more, and that’s saying something.

Most of you already know that Bedlam’s going through a transition right after the Fringe is over. They’re losing their lease and need to find a new home. It’s sad to see them leave their current location, but they’ve moved before, and been homeless before. They’re a resiliant bunch. I look forward to more art and socializing with them. Meantime, there’s one last 11-day Fringe party to enjoy in their company!

You can get more info on Bedlam’s own Where Next? page