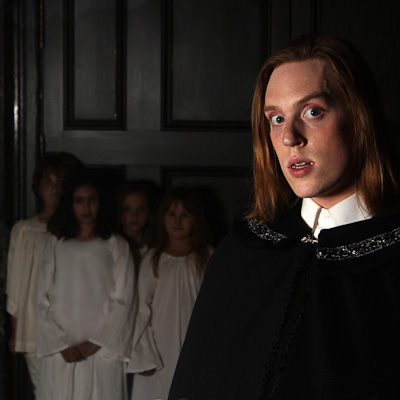 “Locked inside Dracula’s domain, chilling secrets unveil. Delicious discoveries drip from Transylvanian walls as this musical montage surrenders secrets of why the school children are disappearing one by one…”

So… Dracula as a metaphor for pedophiles? Or child-abducting serial killers?

Sorry, that’s what the publicity blurb makes me think.

Of course, Dracula as theater for young audiences doesn’t exactly click for me either, but the company has a track record of knowing what they’re doing, at least in terms of pulling in a crowd…

2008: Robin Hood The Musical (#7 in the Minnesota Fringe Festival attendance)

And they do know how to put on a preview.

In a welcome trend of not repeating the volume issues of Fringe-For-All 1 last week at the History Theater, most artists this time around could be clearly heard, and without the aid of microphones.

I’m not sure if the young lady he was intent on seducing was Mina (Quinn Shadko) or Lucy (Emily Temple) (not a school child by the way, so I’m still a little puzzled by the kiddie angle in the publicity) but she also had a lovely voice and they blended well together. I think the dissonant note at the end between them was intentional (after all mixed marriages between humans and monsters never work out.)

Basically, your standard-issue Dracula scenario,
“Haven’t I met you before, several centuries ago?”
“Oh, I can’t, I really can’t, OK maybe just a nibble.”

And given the period costumes and the cape and the booming voices, I kept expecting someone to bust out with “The PHAN-tom of the opera is there… inside my mind.” But they refrained (again, no pun intended)

Always a plus in the Fringe musical when the performers can actually sing.

Fringe For All preview video