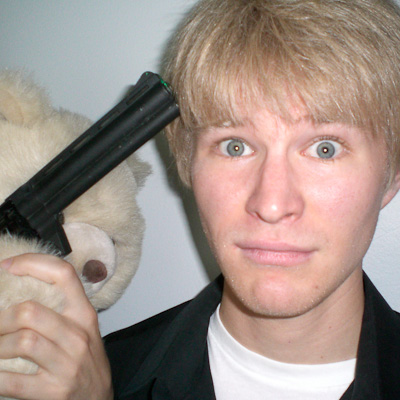 “Have you ever had a good friend give you bad advice? Nolan’s friend is a teddy bear who tells him to shoot his father in the leg. A dark and fuzzy comedy.

If ‘August: Osage County‘ and ‘Avenue Q‘ had a drunken one night stand, they might have produced this darkly comic family drama.”

So I guess the “Avenue Q” parent is responsible for the DNA that caused the lead character to fondle his own nipples using a teddy bear, while wielding a pistol.

This was just… weird. Intensely goofy, mildly threatening and… weird. But in a good way, an entertaining way. When an actor came out to give voice to the evil teddy bear and interact with the gun-wielding teen, well, it got weirder, and more fun.

Is it a little rough around the edges still? Sure, but it still definitely feels like one of those Fringe shows to kick back and enjoy the ride.