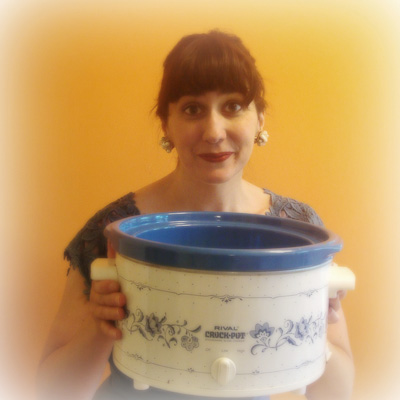 This one really surprised me (in a good way)…

In this dark comedy, Claire Olafson and her two ‘best friends’ Joy and Ruth form the middle-aged menagerie of their church’s Bible Study, where they keep God close and their enemies closer. The Scande-German Hobby Fair proves to be more than crafts and baked goods as the ladies vie for attention, power and glory.

When Minnesota kitsch meets Bible Study b*tch, things are bound to simmer in The Crock Pot!”

This is normally the polar opposite of entertainment for me. I’m just not amused by “Minnesota accent”/Lutheran humor. It frequently seems mean-spirited to me, like all Minnesotans are funny-sounding simpletons. Those aren’t the Minnesotans I’ve become acquainted with in the years since I moved here. The popularity of this humor bewilders me. You want to perpetuate this stereotype about yourselves so that’s all people think of when they think of Minnesota? I just don’t get it.

Add to that the whole genre of “church people are secretly small-minded vicious hypocritical human beings” and I’m doubly turned off.

So imagine my surprise when I actually found myself liking this preview snippet.

At first, I found it all grating like I normally do, and then the writing and the performances totally won me over. Accent plus phone call for exposition normally equals boring, but since the character was accepting a call from her sister in prison, it got progressively more interesting. The non-incarcerated, churchgoing sister (Ruth, I think) at one point scolds her sister for saucy language unheard by our end of the phone call…

“That’s what an inmate would say, not a lady.”

And she signs off by saying, “Dear, I love you. Now go make someone your bitch.”

Ruth has designs on the fresh-faced new pastor, but she explains to her sister that it’s tough to get a conversation going with him at church services because, “it’s his place of business.” She gets the brainstorm on the phone to photograph the minister in a dozen godly poses for the church calendar.

Pastor Ed has apparently been burned like this in the past, but he admits when Ruth springs this idea on him that he’s “totally down with being the Lord’s clay.” Ruth encourages him to “use your body for the Lord.”

Sure it’s inappropriate, but the people have some dimension to them. They’re not just cartoons – at least not the two in this excerpt. For a show to overcome my prejudices, and get my attention in just three minutes. That ain’t easy to do.

…the too nice and often stepped on Claire!
…the manipulative and conniving Joy!
…the independent, cat-loving, pastor-crushing Ruth!

(I assume this means she *has* a crush on the pastor, not that she literally, physically crushes him.)

…the cute, young pastor, Ed, with a sketchy past!
…the nosy and dumb Mrs. Ackerman!
…the wheelchair-bound, vengeful Frank – Joy’s husband!
…the cantankerous and lazy Skip – Claire’s husband!

Written by Emily Schmidt and directed by Molly Dworsky!