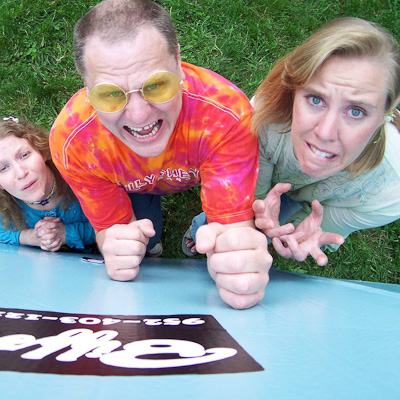 In the category of “shows that I liked which will surprise absolutely no one” there is of course a subcategory of “Shows That Get Physical” (aka, that brand of physical theater everyone keeps talking about, covering a spectrum from mime and clowning to dance, all wrapped up in some kind of theatrical storytelling)

“Come experience an imaginative, visual world of physical theater where a disco soldier dazzles his enemy, lovers fall prey to the power of the flower and desperate hippies are Waiting for Biffy!”

A fellow blogger astutely pointed out part of the strategy for keeping things original here. They keep adding a new person each year. At least the first year I finally saw him, Fringe 2008, it was Dean going solo with Silent Poetry. He was part of my pre-Fringe Top 20 that year, and ended up with a five star review from me, and equally complimentary praise from his audiences. A Returning Favorite in Fringe 2009, he had his performing partner Kristen back from the war (that’s not a euphemism. She was literally in the Middle East) for Silent Poetry 2, which I unfortunately missed, but which audiences again embraced wholeheartedly

This year, they’ve added Renee, who was present as part of the preview of Waiting for Biffy. Their standard waist-high black frame for handy appearances and disappearances, and handful of optical illusions. Their usual energetic music. And a quest for toilet paper, or at least to be the one who ended up in possession of the toilet paper. Elevators, escalators, a lot of furious running in place, hands comically appearing halfway across the stage to nab the roll of toilet paper from their unsuspecting prey. It was a tidy little preview that shows what they’re up to. I’m curious to see what new scenarios they have in store this year. Sure to be a combination of the comic and the sentimental, both most welcome.

They also filmed a video preview in an actual location, with props they didn’t need to mime.

Ballad of the Pale Fisherman

“What happens when a fisherman falls in love with a woman who happens to be a seal? Faced with the dueling calls of land and sea, which will she choose?

Ballad of the Pale Fisherman is a re-imagining of the Irish/Scottish folktale of the seal-woman, or selkie. In this timeless fable, a fisherman falls in love with a beautiful seal-woman, and takes her as his wife. But a love that defies the laws of land and sea is never simple (see: Little Mermaid, The), and the seal-woman must eventually make a choice borne of betrayal and self-sacrifice. Will she choose her past or her future, her heart or her home?

Using song and movement to portray fisherman and sea creatures, curmudgeonly storytellers and sweeping landscapes, this newly-formed ensemble creates a world that is as magical as it is moving, as lyrical as it is heartfelt. The performers hail from backgrounds and trainings as varied as Live Action Set, Sandbox Theater, the Minnesota Shakespeare Company, the University of Minnesota B.F.A./Guthrie program, and the Lecoq-based London International School for Performing Arts (LISPA). From such far-flung experiences, these eight physical theatre creators have come together in collaboration to build this re-imagining of the selkie folktale through original music and storytelling.

There will be physical theatre, but it’s not a dance piece. There’s an accordion, but not a polka to be found. It’s family friendly, but it’s not a kid’s show. It’s a fairy tale with depth, with sharp edges and deep longing. Above all, it is imaginative.

Come see for yourself!”

I’ve already written a bit about the seal-woman trend in this year’s Fringe.

This was one of those previews that stood out because of its precision and polish. Everything I’d expect from a group like this, and more besides. The thing was timed out meticulously, and the excerpt was perfect for a showcase like this. Unusual entertaining storytelling. They even had a cliffhanger, just when you were totally into watching it, so they wouldn’t run over time. (But not a “hey, no fair!” kind of cliffhanger. More of a “damn, I need to see that” kind of cliffhanger.)

The ensemble were waves and wind and fish flopping about on the deck of a ship, and from that emerged the fisherman, and after that, the seal woman, caught in the fisherman’s net. Would he gut and scale her just like the other fish (well, of course not, or we wouldn’t have a show, but he seemed pretty determined)? “Wait!” cried out the ensemble… and, scene.

Derek Miller was front and center, barefoot, narrating with an accordian in his lap. But the musical instrument wasn’t so much for melody as for sound effects – the nets being cast and reeled in, the wind and waves, among other things.

It was all strangely hypnotic, carrying you along like the tide. I was already intrigued by this one, but now I’m looking forward to it even more so. Mission accomplished, preview folk.

They’re even recommended by Sally Wingert, and I’m certainly not going to question Sally’s taste. She knows her theater. (And I’ve had a big theater crush on her ever since she did my little play in Thirst a few years back, so she can do no wrong in my book.)