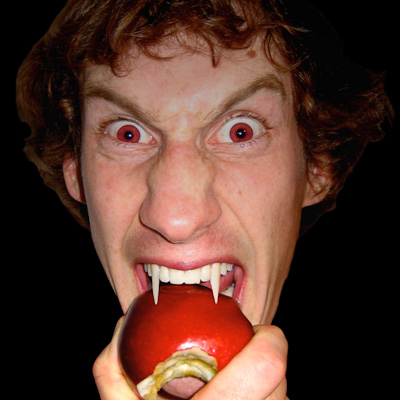 “A twisty mystery of a comedy, hilarious and sad, about literature and fame and failing at both. Two men walk into a bar. It’s not the start of a joke, it’s the start of a hundred jokes. And some twists. The #5 show from the 2005 Fringe, starring Ari Hoptman and Alex Cole.”

Their Fringe-For-All preview was just what I expected, all very good things. Clever script, Ari and Alex, plus the bonus of Alayne Hopkins portraying an old Jewish lady.

“A modern day quest for… something important. You tell us what. The hero’s journey surrounds your seats and moves between them. Joseph Campbell’s classic hero cycle twisted by our own interesting times.”

This is a *great* idea. Taking the classic hero’s journey myth and using it as the structure around which to build a long-form improv. Hard to get something going in just 3 minutes of preview time but they did their best. And of course, the audience gave them a little something to work with.

“Something that you’ve lost and haven’t yet found.”

“Hair!” someone cried out, a bit forlornly.

A Quest for Hair, then

“Something that exists in nature.”

“A building or structure”

“The 35W Bridge!” someone else called out.

You could tell by the look on ringleader Damian Johnson’s face that he was wondering,

Because once you send an improv team down that path…

It was a fun bit, and I’d be interested in checking out what happens when they have the full hour to play around in.

It’s a site-specific Fringe show, which can be problematic for scheduling and travel. However, this particular venue, the Sacred Paths Center, is really easy. They’re just a block north of where Gremlin Theater (a regular Fringe venue) is, 777 Raymond Avenue, right off University, near the 94 and 280 intersection. If you can get to Gremlin, you can get to Sacred Paths. And since there are almost a dozen shows playing at Gremlin, you can do your St. Paul day and throw The Quest in the mix as well.

I have written at length about how much I enjoy improv, and the funny ladies and (cute) guys who perform it. I wish I saw more of it. There’s tons of it going on in the Twin Cities (just like “normal” theater). The Fringe is one of those times I get to catch up on a little of what I’m missing the rest of the year. So I’m hoping to get over to Sacred Paths on my own little Gremlin day(s).

Princess Jessica & The Kingdom of Boogers

Only a brave and pure-hearted person can journey to the Kingdom of Boogers to save Princess Jessica from the evil Emperor Snotso, and young Squats fits the bill. Join Squats and his best friend Dorfus as they scream, giggle, learn new tricks, overcome their fears, and grow up a little bit along the way. Recommended for kids aged 7-104.”

“Missing this show will result in a fringe festival so horrible, only I could make it worse.” — Emperor Snotso

The guys behind LICK! in the 2005 Fringe, Cannibal! The Musical in Fringe 2006, and last year’s The Return of LICK!, doing a children’s show?

They, naturally, continue to tweak the Fringe traditions as they do so. The preview was no different. During Robin Gillette’s attempt at an introduction, the fanfare kicked in, and the royal messenger took over the stage so determinedly that Robin just ceded the stage to let him get on with it.

“I apologize for interrupting the Fringe Wench!” he intoned.

OK then. He then described the situation outlined above, and provided more detail as to the many perils those attempting to save Princess Jessica might encounter. They included the fog of sadness, broccoli pie, and invisible belching wolves, among many others. The style is sort of like if Dr. Seuss was feeling just a bit naughty one day, and decided to see how much he could get away with and still call it a children’s book. Which is all to the good.

The Mechanical Division is a Returning Favorite from my 2006 Top 20 list for a reason. They always deliver the laughs. It’s why they got the encore slot last year, and it’s why I attended it, and let them be the cap on my Fringe-going marathon for 2009. Theater’s always a bit more fun when they’re around.

“One Man. Four Books. No Mercy.

Bite Me Twilight is an irreverent solo retelling of the entire ‘Twilight’ saga from the creator of Fringe hit ‘Parry Hotter and the Half-Drunk Twins.’ This pop culture-infused musical parody of vampire romance will leave you singing, ‘Oops! I f#@%ed a vampire!’

Whether you’re Team Jacob, Team Edward, or or have just been dragged to one of the movies, this show is sure to delight anyone with a sense of humor who’s at least remotely familiar with the perils of vampire/human/werewolf love triangles.

Minneapolis Actor/Comedian/Improviser Tom Reed plays all the characters, sings epic songs and cracks wise about the ‘Twilight’ universe while retelling a version of the story of all four books (spoiler alert!) in the ‘Twilight’ series. The result is a biting comedic romp, as smart as it is hilarious.”

Here’s another series of books my mother has read but I’m just inching my way through in order to be ready to watch the movies with her. (Well, and I have to admit, there’s a lot of shirtless werewolf guys, so that’s a plus.)

Just the other night another Fringe artist was saying to me, “Damn Tom Reed for having such a ridiculously successful preview. Now what the hell are the rest of us supposed to do?”

I sympathize. I know I certainly wouldn’t want to follow that. The Fringe organizers wisely held him in reserve to kick off the second half of Fringe-For-All last Monday – no doubt to insure that 1) we all came back from intermission, and 2) that we got a jolt of fun to fortify us for the 14 previews yet to come.

With Jill James providing the music, and accompanying the tireless Tom on electronic keyboard, Reed set to work with his elastic face and body to create a small cross-section of the characters we’ll be encountering. And when Bella sings out, “Bite me, Edward! Bite me now!” well, what are you going to do except get your tickets before the darn thing sells out all five performances, like Parry Hotter did last year.

Even his postcard is funnier than most of them floating around out there. Sample testimonial quotes from characters in the books include…

“Till I saw this show all I thought about was killing people and drinking their blood, now I just want to sing!” – Jasper Cullen, vampire

“This show is even hotter than my sweaty washboard abs.” – Jacob Black, werewolf

“I knew you were going to read this.” – Alice Cullen, vampire

If I write any more about this 2008 Top 10 Returning Favorite or his show, he’ll probably file a restraining order. So let’s just say Bite Me Twilight is definitely on my schedule (and Mom’s) (if we can get in), and leave it at that.

Oh, and a little video snippet from last year’s Fringe-For-All, just for reference.