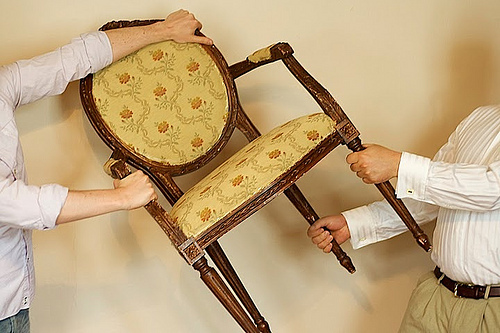 In the “shows I was unexpectedly charmed by” category is…

“Morton has run out of ways to save the Thornton family estate from foreclosure, but when two antiques dealers show up and offer Morton a large sum of money for a particular antique chair, it looks like all may not be lost.

There is only one problem: Morton is in love with the chair.

With the foreclosure deadline closing in, how far will Morton go to defend his love for Yvette?

Sexual objectification takes on a whole new meaning in this farcical comedy when the object of sexual desire is, literally, an object. “Happily ever after” means something different when you can’t legally get married. And sometimes autodidacts are the smartest people in the room.

If you have ever been annoyed by a love story, this show is for you.”

First off, I was hoping to like this show anyway, because the writer/director is Gemma Irish, who gamely pitched in to help as a 24-Hour playwright for Theatre Unbound’s annual fundraiser a couple of years ago. As playwright wrangler for the event, I often find it challenging to find 12 writers willing to go through sleep deprivation to instantly create a play overnight. Gemma was one of those writers, and whenever possible, I try to have a long memory about those things and help those writers in return as I’m able.

However, what are the odds that two local playwrights – one male, one female; one gay, one straight; one deaf, one hearing – should both write plays about men who fall in love with furniture, and produce them in back-to-back years in the Fringe Festival? I am referring, of course, to last year’s That Chair Was My Wife. It was the first thing Mom and I saw in last year’s Fringe. Even though that show was in my pre-Fringe Top 20, I still wasn’t sure how I’d feel about it. It ended up getting a 4 star review out of me, and turned out to be more fascinating, and strangely moving, than merely creepy.

But who knew men’s amorous attentions to chairs was its own genre? As Robin Gillette said the other night at Fringe-For-All (about the seals who turn into women double feature at this year’s Fringe): “I do not understand the zeitgeist.”

The last time I checked their Fringe page, there wasn’t a lot of information there on the people involved. So I didn’t know what to expect.

Then Joe Bombard walked out.

And I now want to see this show about ten times more than I already did.

That was before he did a thing.

Joe Bombard is one of my favorite theater people. And he works a lot. And I miss so many of his shows it’s criminal. And the one great thing about Fringe season is that I finally have a week and a half where my one and only job is just to see as much damn theater as I can. So if friends have shows and the scheduling magic works out, I can actually watch people I love watching onstage, doing what they love to do.

I think I first saw Joe in Fringe production of Bent, which had such a strange audience member in the front row what I felt compelled to riff on the subject of Fringe Etiquette for the Holocaust. Joe was also the title character in Walking Shadow’s production of American Pilot.

But the reason Joe Bombard is permanently stuck on my list of people I need to see perform as often as I can is that he was also the title character in Dog Tag in Fringe 2008. A little script my friend Anne Bertram and I wrote. And Joe was just a heartbreakingly delightful dog, with such boundless enthusiasm, that… well, see for yourself…


There are actors who would treat that role like a joke.

And there are actors who would treat the role of a man in love with a chair like a joke.

Joe isn’t one of those actors.

No matter the level of weirdness, he commits to it fully, and makes his characters – animal, vegetable or mineral – fully human, and recognizable, and relatable.

So if anybody can make me care again about a guy who cares about a chair, it’d be Joe.

In fact, when he touched, and kissed, and brought flowers for the chair, Yvette, there were actually some people in the audience who went, “Awwww.” Like it was the cutest, most romantic thing ever.

A guy. And a chair. To the tune of a little French pop song.

(Bonus points, I see also in the cast list now, they have Patrick Kozicky, of
Fringe 2009’s The Return of LICK!, Fringe 2008’s American Sexy, and Fringe 2006’s Wonderland, among other things. Cool.)