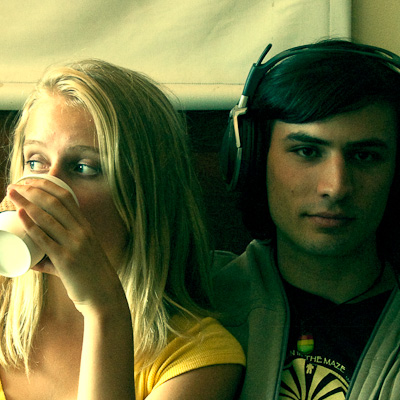 “The short version: The Rush coffee shop is a haven for all, from homeless evangelists to aspiring musicians. Grind uses rap, shadow puppetry and lots of music to see what happens when a shop like this is set for demolition.”

OK, so I have a knee-jerk reaction to any show that slaps “The Musical” onto the end of their name, but it’s a Fringe marketing gimmick that works for a lot of people. So I’m gonna stop fighting that.

I’ve gotten a reputation for hating musicals and that’s not entirely true. I don’t live and breathe musicals like some of my fellow gay brethren, but I don’t hate all musicals. I do hate bad musicals. And there are a lot of them out there.

What constitutes a bad musical? A musical theater geek friend of mine is of the opinion that the bad ones are the ones in which the plot stops dead for a musical number, rather than the song pushing the plot forward. Revealing character is a good reason for a song, too, but even those need to keep the thing moving right along.

Another musical theater aficionado acquaintance of mine insists there must always be a love story, somewhere, at the heart of it. What else would prompt people to be so overcome with emotion that could only express themselves in song?

Stories set in coffee shops are almost as overdone as those in office environments, but hey, I’m just as guilty as the next person of using coffee shops. No stones to be thrown in that glass house.

I hear the Theatre Undeclared crowd sped up the song they sampled at Fringe-For-All, so that it would fit in the three-minute time limit. Phew. That may explain why one person was sometimes out of breath and overpowered by the electric keyboard nearby.

And wow, there were a lot of cheesy coffee-related metaphors – “I love you latte” “I can’t espresso how much I feel…” etc.

And if the young lady and the young man hadn’t both been totally adorable, solo, and with each other, it probably wouldn’t have worked.

But they were adorable, and it did work. And after reading their slightly more expansive synopsis, cheekily titled…

“The better version: Grind is part of the next generation of musical theater, where the lines between actors, band and audience are broken down for good: our actors are musicians, our musicians play characters, and the audience is always, always in on the game. We believe breaking down these barriers is essential to telling a story that’s both surprising and resonant. That’s why we chose a coffee shop–it’s a place where you arrive with a barrier up, but when that barrier gets broken down and you let yourself experience the people around you, magic can happen. And in “Grind”, it does.

Plot-wise, Grind follows the owner of a doomed Minneapolis coffee shop, her aspiring-musician brother, a homeless evangelist, a comic-book writer and a young barista relocated by Katrina as each answers the question “what do I do when ‘home’ can’t be home anymore?” Punctuated by bursts of shadow puppetry done in the style of comic-book art, each character struggles to answer this question set to a soundtrack made from styles varying from rap to indie to jazz to spoken word. And somehow, it’s also hilarious.”

…I get the feeling we might be in for something interesting. Not your standard cookie cutter romantic comedy.

I’m particularly intrigued by the comic book art shadow puppetry stuff. There are pictures of the process and end result on their flickr feed, again on their website.

Plus, the trailer for their previous outing – “Liberal Arts, The Musical” (argh) actually looks like some really nice work. Which bodes well for musical number 2.


I particularly enjoyed how a quote from a professor proclaimed, “It was sick.” (I presume in a good way.)

Their blog has song samples from rehearsal – complete with actors swearing when they screw up the lyrics. Hee.

And Theatre Undeclared is one of a half dozen acts that are doing the Midwest Fringe circuit. So they’ll have one Fringe already under their belt by the time they get to us. Kinks all worked out by then, I expect.

It’s strangely bewitching. I can’t quite put my finger on it, but I know I’m curious, rather than indifferent, which inches this show up a notch on the “must cram into my schedule somehow” list.