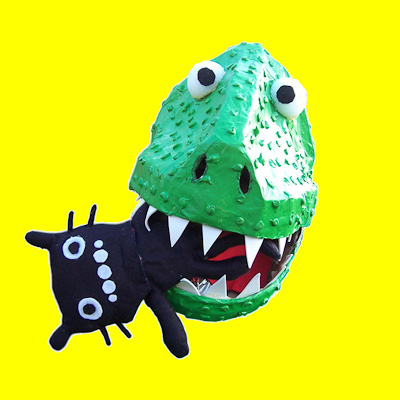 “Fartosaurus Rex! is the saga of what happens when the king of carnivores decides to take up a vegetarian diet of legumes, broccoli and cabbage. His cholesterol levels go way down and he finds friendship with fellow prehistoric creatures now that they no longer worry about getting their heads bitten off.

But there’s also an unfortunate change to his digestive system. Fartosaurus Rex’s former prey used to flee his fangs. Now they fear his flatulence. Will the dinosaur lose his new buddies? Will climate change ensue because of this new source of methane?

A puppet show about flatulence, friendship and food politics, starring a giant green dinosaur who sings, dances and cuts the cheese.

Plus a special cameo appearance by Wobbles, the Minnesota Fringe Festival kitty mascot. And audience members will have a chance to win a whoopee cushion door prize!”

This Fringe show’s title and concept have been inducing giggles in the Fringe community since it was first announced to the world during the Fringe lottery in February.

The preview doesn’t end happily for Wobbles the Fringe kitty. After devouring a smaller dinosaur, and Fred Flintstone (who fruitlessly ran for his life yelling, “Yabba Dabba Don’t!”), Fartosaurus Rex bit off poor Wobbles’ head. So there was also a cameo appearance by Wobble’s bloody entrails. Yikes.

Our narrator was a giant talking pillow (no, really), and Fartosaurus itself is a person in a vibrant green dinosaur outfit – and cross-eyed.

No farting occurred during the three minute preview, as Fartosaurus had not yet changed from his meat diet.

But you can hear him let loose in this video interview…


And just in case you can get enough of farting dinosaurs, here’s something random…


I think my favorite part of the preview was when, after only two lines of a song, Fartosaurus went up, and called out “LINE!”

Saved by the red light, Fartosaurus was not required to finish the song.

But clearly these people have a twisted, though still family friendly, sense of humor. The adults will get it on one level (Schwanstucker. Really?), and the kids get the farting and the disemboweling and the whoopee cushion door prizes (their parents should *love* that)

They are, appropriately enough, at the Jungle Theater.

The press release they sent had some delightful tidbits in it, including…

“We’d be happy to talk to you about it, or make Fartosaurus Rex available for an interview or appearance.”

(That is *so* tempting. If only we had the budget to do the TV show this year, a farting cross-eyed dinosaur as a guest would be delightful. Sigh.)

“This is a one cheek sneak past the barriers of good taste, boldly diving into the world of bodily functions for a good belly laugh. Amusing for kids, or anyone else who likes a good fart joke. But also appealing to adults for its gentle message about friendship and climate change.

There’s back story love story in the production. “Fartosaurus Rex!” is the creation of a couple of newlyweds who went on their first dates at 2009 Fringe Festival shows. Now back with a show of their own, these Fringe Festival rookies almost eloped so they would have more time to sew costumes, fashion puppets, create a prehistoric Badlands set and mold papier mache dinosaur turds instead of planning a wedding.”

The bio section on their Fringe page has bios for each of the puppet/non-human characters, including, of course…

“Fartosaurus Rex
Role: Star. Eating. Singing. Farting.
…Credits include Jurassic Park on Ice (National Tour), Law & Order: Hell Creek Formation, Medora Musical and All My Children. Proud graduate of Michigan State University. Thanks to Mom, Dad, God and my intern/assistant Katie for remembering only a quarter packet of sugar in my latte.

Buddy
…got his start in show biz with his family’s vaudeville act, The Aristocrats. Credits include A Streetcar Named Desire (Stanley Kowalski) at Randolph Junior High School, West Wing and commercials for Heinekin and American Express. Northwestern graduate. (Again, this is a puppet.)

Richard Chin
Role: Stage manager
…has created toy theater productions of A Christmas Carol and Dracula. He’s looking forward to bigger things with Fartosaurus Rex!: sock puppets instead of thumb-sized paper figures and the Jungle Theater stage instead of his living room. But he’ll try to remember that in puppet theater, there are no small parts, only small actors.”

I find it really hard to resist a show that has such a healthy sense of humor about itself.