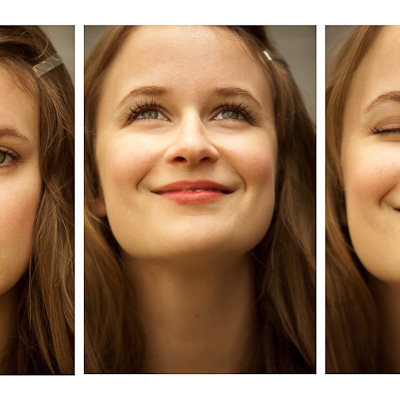 Editor’s note, 7/27/10: The comments below reflect some understandable confusion about Tamara Ober’s role in this show. I wrote to Ober to check the facts, and she replied, “Ah…yes, some confusion! Well, I knew that might happen at some point. I had planned on making work for this year’s Fringe and was simply unable to do it all alone again…and a few of life’s twists and turns also made it impossible with the timing of things…so I tried to be involved in making the show with Brant Miller, and then when Brant got going with his ideas for the show, well, it just seemed like he needed to do his thing, so the show became his. And I am simply providing him with the space to do it. (I think I am officially called a “producer.”) I knew Brant was very talented and I’m sorry he and I didn’t create this show together, but I knew he would make something amazing! So this show belongs to the three of them. Mark, Katie, and Brant.” -J. Gabler, arts editor

The First Five Minutes Are Slow

“…but what follows is an epic. Using movement and the manipulation of everyday objects, three actors create and perform an original adventurous journey. A show for everyone that embraces laughter and imagination.”

“I’m really jealous you guys all got to see that and I didn’t,” said Robin. Stuck backstage in her role as MC, it was hard to tell what was going on. All she could here was that we were all very amused.

This is where it gets fun to watch the Fringe slowly start to congeal. At first, the tech booth kept the lights up a bit, until they realized – oh, darkness is the point! And they pulled the lights out for the rest of the bit.

[Blogger update – at the time I first posted this back on July 14th, there was no information on the cast available on or off-line.  Due to the comments below, and an update of the Fringe website for the show, I can now properly identify people.  Apologies for the confusion.  I was operating with very limited information.]

Kathryn Jorgenson was dressed in business attire, and glasses, and we were told she went into a cave. Along with a desk lamp. The lamp would go on and off, in time with the music, at the behest of a remote control clicker she would zap it with. And dance with. The light started out red, and by the end somehow became blue, and green, and then kind of a kaleidoscope. She was joined by two men (Brant Miller and Mark Rehani) in matching button down shirts, ties, vests and slacks, creeping up behind her. Also armed with desk lamps they could remotely zap, and dance with. And the colored light samba they had going would reveal their contorted comical quizzical faces in all sorts of combinations. It was cheeky and goofy and really a hell of a lot of fun.

A scratch of a needle across a record sound and the lamps went out. “What happened?” asked one of the ominous men. “Our time is up,” she replied. They’d timed it out with time to spare, but the bit at the end was an amusing way to put a button on it and avoid being applauded offstage for running overtime.

Not a heck of a lot on their Fringe page, but when I went digging about I discovered…

“Oh! Tamara (the producer)’s the one who did Pipa in last year’s Fringe!” (a show I heard a lot of good things about but never got a chance to see) A sampling…


From the looks of other posts on the internet, she took her act up to the Canadian Fringe circuit and out west to Seattle, among other things, quite successfully. She also revisited Pipa as part of the Red Eye New Works series.

Also got herself a Minnesota dance award, the Sage Award for Outstanding Performer, last fall. So she’s had a busy fruitful year since last Fringe. She’s done a lot of work in the past with the Zenon Dance troupe (which even a non-dance-ophile like myself has heard of, if not seen in person yet)

Oh, and she was also part of the Fringe 2008 show The Gypsy & The General from 3 Sticks, so that’s another point of reference I didn’t already know I had.

Time I saw her for myself I think. The show looks like a real lark.

So, thanks, Fringe-For-All. I now need to revisit my schedule – again. Too much good theater to choose from. My favorite painful time of year.