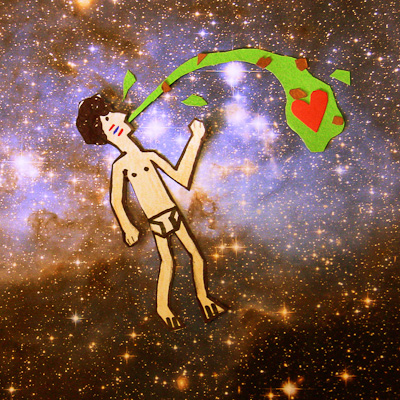 The First Show I Want To See Twice

The Failed Voyage of the Failed Ororo – Ritz Proscenium

The Failed Voyage of the Failed Ororo is the first show in the Fringe that I’ve stumbled across that I feel like I have to go and see again (and I actually am catching their final performance). There’s just so much going on in this play, so much weird stuff flying through the air and colliding, words and music and puppets and shadow and video and slides and cartoons and cue cards and emotion and complex intellectual constructs, there’s no way I caught it all the first time around. It’s that rare show that rewards repeat viewings because you’re bound to see something new. Plus, the first time through, you’re just grasping to get hold of the storyline. It’s funny and heartfelt and more than a little bizarre. I couldn’t help getting sucked in by it. The promise that landed them on my Top 20 list was fully realized and then some. In fact, if I’d only known then what I know now, they would have been in my Top 10. When I was talking about how delightfully weird this show was, a friend asked me, “So is it just weird, or is it 5 kitty weird?” Oh, it’s 5 kitty/5 star weird.

“Don’t let non-existing get you down.”

A young man named Ororo (Larry Sass-Ainsworth) has been forgotten by everyone in his life who’s supposed to remember him, including his parents. Worst of all, they have forgotten him during that family-focused time of year, Thanksgiving. Thus, in the middle of the Thanksgiving pageant at school, he drops out of existence into an alternate dimension. The timing is unfortunate, since he takes his costume with him – Indian war paint on his face, a feather in his hair, a bow with a quiver of arrows, and his underwear (tighty whities) which were serving as his Native American loincloth. Ororo meets up with a cowboy named Jean-Luc (Nicholas Clark), a young man forgotten by others and dropped into this dimension many years before. After the requisite “cowboys and indians” chasing about, they bond and seek to escape to the real world again – or perhaps the manipulative Jean-Luc has a larger plan afoot…

“How were you forgotten?”

Creator/Designer/Performers Nicholas Clark, Sophie Gori, & Larry Sass-Ainsworth have created a Fringe show that is mind-boggling in its complexity, but is a real hoot to watch. The production clearly wants you to come along for the ride and enjoy yourself, but it’s not planning on slowing down. No worries, however. If you miss latching onto it at one hairpin turn, it always circles back around and throws you a line. There are so many different strategies and sections of the performance within the larger story that I filled up two pages with hastily scribbled notes where most shows only require one.

“We need to go back in time and stop myself from doing this.”

One of the things I admire most is that, with only two people and next to no props onstage in that vast Ritz Proscenium space (and let’s not forget that, just like every other show, they only had one three-hour block of tech time to play with in the space to prepare), Clark and Sass-Ainsworth utilize nearly every corner of the theater. Jean-Luc frequently ventures out into the audience area, the stadium seating and side viewing platforms included. These two performers are often dwarfed by the size of the projections on the back wall, and the Ritz’s vast space, but the effect is used to their advantage, two lost souls adrift in an unforgiving void. The loneliness of the characters which occasionally surfaces is accentuated by all that space.

“I’ll be damned. I guess we really are alone.”

The playfulness with which these performers toss around the different styles of conveying information is infectious. Jean-Luc’s tale of being forgotten is told with shadow puppets. When the girl he loves decides to marry God and become a nun, Jean-Luc becomes determined to make God angry enough to smite him so that he can see the deity face to face and do battle with him. His strategy of offenses (hitting children, slapping old women on the behind) is hilarious in shadow puppetry. Later, as Jean-Luc and Ororo are sucked into a black hole, they also get sucked into a haphazard 2-D cartoon film with subtitles. At another point, as Ororo furiously rides a hobby-horse while being chased by a large black hand emerging from a cheesy brightly colored old-style music video treatment of common images, the loud rock music of the soundtrack makes him hard to hear. So the actors mouth the words, as Jean-Luc helpfully holds up cue cards, which take on their own comedy routine of cycling back in on each other as the conversation progresses. Some scenes are played out in front of a video screen of black and white Twilight Zone-style images slowly drifting through a field of stars. Other times, it’s just two guys and a couple of powerful flashlights cutting through the darkness, throwing illumination across large distances, or casting evocative shadows close up. Random radio signals piercing their veil of nothingness means we get a soundtrack that includes the Andrews Sisters & Bing Crosby singing, “Mele Kalikimaka,” the 10cc hit “I’m Not In Love,” and “Tiny Dancer” from Elton John among many others. (How do a bunch of 17-year-olds come up with this stuff? Hell, how does anyone?)

“How do I know that’s not just some floating mustache?”

A prime example of the low-tech scrappy wonder of this show is the scene where Jean-Luc teaches Ororo how to become invisible. First, with much effort, Jean-Luc becomes invisible. This is represented by cheeky blackout, and the actor stepping aside and holding out a mustache on a stick where his body used to be. Next, Ororo has a heck of a time clearing his head of disturbing (to him) images we see on the video screen behind him, but finally he, too, becomes invisible. This time, it’s underwear on a stick. The sticks sometimes don’t cooperate, but the actors improv with the props as needed to keep things moving. While invisible, the two men collide and become entangled – mustache and underwear on sticks sharing the same space only one person would. Jean-Luc struggles to disengage, while Ororo admits “it feels kind of good.” After they pull apart and then become visible again, Jean-Luc needs to head off to another part of the dimension to spend the night, “I’m going to go. You were just inside of me, and I need to cry for a little bit.”

“Us causing nothing will mean something to everything.”

All of the theater tricks in the world wouldn’t work if the story weren’t compelling. The Failed Voyage of the Failed Ororo works because at its heart, it’s a story of two lost souls who have latched onto one another, finding it hard to ever be alone again, unable to tear themselves away. That’s why, at the end, when Ororo (maybe?) makes it home, but without Jean-Luc, he seems more alone than ever, even though he can reconnect with the real world and all the people who forgot him in the first place. It’s a great metaphor writ large for pretty much anything an audience member wants to decide that it’s “about.” Sci-fi puzzlers work best when at their root they’re about human beings. The Failed Voyage of the Failed Ororo is both the most peculiar, and the most beautifully human, of almost any show I’ve seen in the Fringe this year.

“From the bottom of my non-existent heart.”

Yet another thing that pleasantly surprised me about The Failed Voyage of the Failed Ororo was that every time I started to get ready to take offense (Is this misogyny appearing? Is this homophobia rearing its head? Is this just a bunch of hopeless existential twaddle?), the production would come back to the two characters and their relationship to one another. Grounded in character, potential misogyny was just boys being afraid of girls being different (and how they feel about them, and their lack of control when they think about how they feel about them). Grounded in character, potential homophobia is again two guys being afraid of feelings they sense when they’re left alone together, literally each other’s only friend and comfort. Grounded in character, no matter how much the characters go on about nothingness, there is still an underpinning of hope that refuses to dissipate and keeps them striving to escape. The bond between the two performers and two characters is the most seductive thing about the show. All the crazy whirlwind of things around them is just an epic way to tell their simple and powerful story.

The Failed Voyage of the Failed Ororo is one of those Fringe productions that everyone will interpret differently. And everyone will be right, and everyone will be wrong. I like a show that refuses to be pinned down, while still offering answers to everyone. (Trying and failing to explain what I thought it was about to Mom after we saw it the first time was half the fun.) Is it perfect? No. (The sketchy sound quality of the opening and closing narration was particularly frustrating, for instance.) Not perfect, but damn, it’s good. Really, really good. And that’s why I’m going back to see it again.