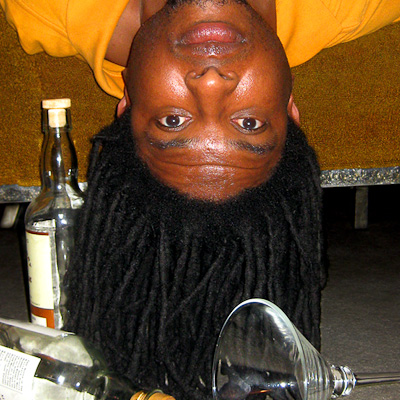 Are Drinking Puns Appropriate In A Headline For A Show About An Alcoholic? (I’ll Resist)

Drink Drank Drunk: Diary of the Life of the Party – Ritz Studio

The Adventures of Les Kurkendaal

“When alcohol touched my lips, I knew I had found my new best friend.”

Yes, I know I’m starting to sound like a broken record when it comes to Les Kurkendaal. He’s become one of Mom’s returning favorites as well so of course we had to see his show before her Fringe visit came to a close. Once again, we were not disappointed. And once again, we learned something new about Les – he’s a recovering alcoholic.

“I decided to treat my sobriety like it was a superhero’s secret identity.”

Les admits that in his drinking days, he was definitely the life of the party (“terrorizing Fringe Festivals across the country!”) These days he’s trying to learn how to be the life beyond the party, engaging the party in a whole new way. One of the things that always amazes me about Les is the way he can turn nearly any facet of his life into a coherent story. That’s no mean feat. It’s as much about knowing what to leave out as it is knowing which details to focus on. Les is never afraid to look foolish. His stories are always about the absurdities of life, and finding humor in even the most unusual places. Sometimes that means the joke’s on you.

“I was convinced I was adopted and my real mom was Joan Collins.”

Drink Drank Drunk: Diary of the Life of the Party alternates between the narrative of the early days of Les’ newfound sobriety, and the origins of his drinking, and how it ultimately lead him to AA. Things always start innocently enough – watching other people serve up drinks on “Bewitched” and “The Love Boat” on TV. Drinking becomes a way to relax, and fit in (for a young man who always felt like the odd person out), and even take the lead in the middle of the social whirl. But when you’re so drunk you can’t remember the second joke in your stand-up routine and you tank on the biggest gig in your career, well, maybe it’s time to get some help.

“You’re actually going to deal with them sober? Good luck. I can’t.”

It’s always a struggle to reinvent yourself, particularly when everybody liked you just fine the way you were. Les didn’t want his life to change either, even though he knew it needed to. The amazing thing about Drink Drank Drunk: Diary of the Life of the Party is that it isn’t assigning blame anywhere else but Les himself. Les knows that if he’s going to be the one to turn things around, he needs to take responsibility for how things are. The fact that he can create a story out of something so personal, and yet make it about more than just himself, is the thing that helps raise Drink Drank Drunk a cut above most other one-person shows. It’s all very well and good to get insight into a particular life, but it’s even more enlightening if it can somehow touch on the universal – the things we all feel, the ways in which we all struggle, and the things we all need to learn to laugh at before they devour us. Whether its weight loss, racial relations, sexuality, or addiction, Les is always tackling some larger issue seen through the comedic lens of his own existence.

“What the hell was I thinking going sober before the holidays?”

Stories are the way Les processes his life. Stories are the tools he uses to get through life, to mark the milestones along the way. They’re also a way to telegraph to the world who he is and where he’s headed. So if you see him out drinking, you don’t have to be like his mom and doublecheck to see what he’s got in his glass. Les knows where he stands, and he’s going to be just fine. Meantime, we all get a hell of a fun Fringe show out of it. A fun show about alcoholism and recovery. The world’s a weird place.