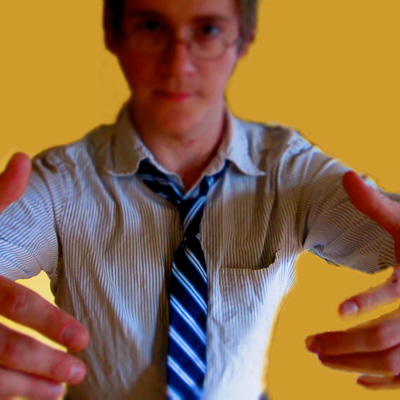 CSI: Ben McGinley made full use of the tools available to it at Intermedia Arts. There was complex sound design, projections, video, (video games even). Pretty much every tool in the box. I just have very little idea what they were building.

I like Ben McGinley, and his partner in art here Laura Holway. They’re returning favorites of mine from when they both worked together on “Forks!” in the group Shorn Sheep Productions, which was part of my Top 20 list for 2007. That piece was largely a movement and text piece. CSI: Ben McGinley relies heavily on video and projection, but the movement and text elements are also still in play.

CSI: Ben McGinley is composed of a lot of interesting pieces, but there’s not anything solid tying them all together. Which is strange, because it should be a pretty short hop from where it is now, to a coherent narrative. There are two, maybe three, significant strands of story around which all the bits and pieces, one way or another, coalesce. One is the search for information on who Ben’s biological parents are, since he was put up for adoption when he was only two weeks old. A second thread concerns Ben’s life as a smoker, and efforts to quit smoking. He smoked for nine years, and there were partitions of the performance for each of those nine years, and a corresponding stab at learning new information about his birth mother in each yearly section. The third possible line to hang things on is the more nebulous “Who is Ben McGinley?” question. Both this question, and the notion of the smoking, are tied to the first strand of the narrative, because Ben’s search for identity is tied to his search for his birth mother. One of the only things he knows about his mother, she was a smoker. Mother and son, connected by their shared addiction, and the son’s addiction to burrowing into the origins of his life on earth.

All of which makes it sound like it should be pretty straightforward and easy to follow, and that the notion of an investigation would lead to clues which would add up to something – even if he never found his birth mother, which, as far as the production is concerned, he didn’t. But CSI: Ben McGinley seems determined to confound any of those standard expectations. I’m cool with that. Experiment away, my friends. My only request is that I be able to track, on some level, what exactly you’re up to. I’m not asking to be spoon fed the story. But when I get to the end, I like to feel a little more like “Oh!” rather than “Huh?”

Because the end was the strongest part of the piece for both Mom and me. Ben tells a story of the joy he got running around some green hills as a child, and how he was looking for something that would make him feel that joyful and purposeful and connected to life again. He has quit smoking, severing the tie to his birth mother, and one assumes severing the search for her as well. Years 1 through 9 of his smoking life are behind him.  All of the video and sound effects cut out, Ben stands at the microphone and says, “Year Ten.”

And the play is over. Ben gets a new beginning.

All of which begs the question, what prompted him to give up (smoking, his birth mother, both…)? Was it health, mental or physical? Was there some emotional epiphany? Was it a dead-end, literal or metaphorical? And what started him smoking, and started him searching? Was he encouraged or discouraged from doing either, or both? By who, and how, and why?

Back to that question of “Who is Ben McGinley?” Even if he doesn’t know for sure, I’m sure he’s got a pretty good guess, or a good idea of what he’s not. We know he’s handy with a camera, and has an interesting sense of humor, but even if he’s a character “Ben McGinley” and not the real Ben, after hanging out with him for an hour, shouldn’t we know him a bit better? Or have an idea why he’s holding out on us?

Like I said, I like Ben McGinley, and Laura Holway, and the work they do. And I wanted to like this show more than I did. I just needed more of a way in than I ultimately got. But I like a fearless experiment as much as the next guy, so CSI: Ben McGinley is still…