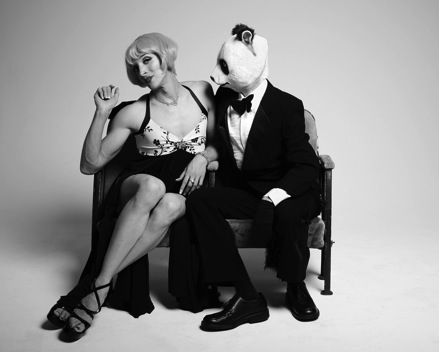 When I first heard there was going to be a panda in Junkyard Theater‘s Bedroom Eyes, I thought. Oh. Panda. Cute.

This panda? Not so much.

Not that this is a bad thing. To explain further…

This video. I swear…

Just so you know what you’re getting into – it’s an elaborately costumed drag queen (Mistress Ginger, aka Justin Leaf) lip-syncing to Nina Simone, but then…

In a business suit.

Who sits watching in a empty theater.

And then gets up to dance with said drag queen.

Then the panda man appears to change size.

And has sex with the drag queen in a men’s restroom.

The drag queen then has to take a pregnancy test.

The panda man has impregnated the drag queen.

The drag queen has her panda baby.

And abandons it in a shopping cart at a grocery store…

The show’s Fringe page says that the video itself, part of a previous mounting (no pun intended) of Bedroom Eyes last summer, isn’t part of this Fringe outing, but its spirit “most certainly” is. So, there you have it.

Also part of the spirit would be this video (no panda warning needed, bonus parts for cute personal trainer…)


I’ve seen a lot of theater (and a whole lot of Fringe), so I’m not easily dazzled, but Justin Leaf (Mistress Ginger) has quite the pedigree – BFA in dance performance from Julliard, 2001 Zaraspe Prize for Outstanding Choreography, a 2007 Minnesota SAGE Award for Best Performance, and a 2009 McKnight Artist Fellowship for Dancers. Has danced with both the James Sewell Ballet and Minnesota Dance Theatre. So, to paraphrase Yogi Bear, smarter than the average drag queen.

And let’s face it, shows like Bedroom Eyes also exist to remind me just how gay I am.

The press release says, in part…

“Junkyard Theater’s Bedroom Eyes is a glittering mélange of song and dance starring the “flawless and lawless” Mistress Ginger, who’s had many lovers but longs for something more. She welcomes the audience into her bona fide boudoir where she sings and dances her way through a slew of old standards, including songs by George Gershwin, Cole Porter, and Johnny Mercer. A love story unfolds as Ginger must confront the truth of her own self if she is ever to realize that which she seeks: true love. It’s comedy, romance, music, and dance, worked over with Junkyard Theater’s transgressive twist.”

“…Mistress Ginger, the pink-haired diva who made it big in the notorious “Broadway Bound…and Gagged” at the Bryant-Lake Bowl in 2007.”

Neil Simon joke (for the theater geek in me)

Bonus points of course – given the evidence of pictures on facebook, and anyone who saw him perform last fall in Theatre Latte Da’s production of The Full Monty – if his other character (Joseph) gets him out from under that panda outfit.

Handsome, smart, talented people just wreck the curve for the rest of us. That’s all I’m sayin’.

Oh, Mistress Ginger. How you taunt me.

For further info, check out…