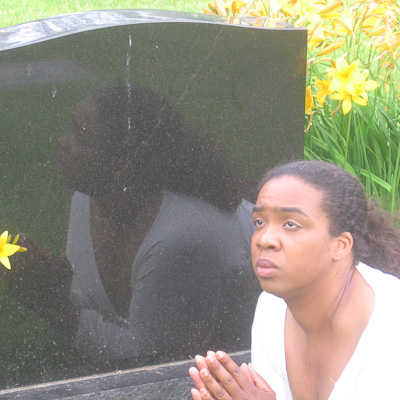 Time for the Last Black Reagan Conservative To Speak Her Mind

Mom had to walk through a thunder and lightning storm (one of her least favorite things) and rivers of water running through the streets in order to get to her last Fringe show for this year, Condoleeza’s Rites, and she’s mighty glad she did. I now understand a little better what fellow blogger Phillip Low was making all the fuss about. I was right to put this one in my Top 20 list this year, largely due to his enthusiasm for the show. Condoleeza’s Rites is easily one of the best Fringe productions I’ll see in 2010.

“Utter only the word for which you will not be ashamed.”

Getting inside Intermedia Arts didn’t exactly shelter us completely from the storm. The roof at Intermedia was no match for the pummeling rain water and a few leaks sprung up in the seating area. During the performance when one actor asked, “What do you see?” and another answered, as scripted, “Water,” audience members could be forgiven an extra chuckle. The resourceful Fringe techs shifted chairs and brought in buckets to catch the drops. Sadly, the house wasn’t full enough to make this as challenging as it ought to have been. More people should be seeing this show.

“As the words shot out of your mouth, someone shot back.”

Why? Condoleeza’s Rites is a funny, intelligent, fearless and powerful piece of theater. It explores how the political frequently has very personal roots, and how forgiveness and empathy can go a long way to changing things that look unchangeable. “

We got a half-black president, it still ain’t gettin’ better.”

Condoleeza (writer Ericka Dennis) is a conservative talk show host not shy about taking on what she sees as the failings of the black community. When she is gunned down by a member of her own audience, she must find her way through the maze of obstacles in the afterlife to come to terms with her past (her father [John Robinson], and her younger self [Naajee Dennis]), and be armed for her future, because her spirit needs to go back. (“Oh hell no!” cries Condoleeza; “Heavens, yes,” counters one of her spirit guides).

“The mask you wear distorts your true voice.”

Condoleeza’s Rites explores how the struggles with racism within her own family, and sexual secrets, formed a world from which Condoleeza rightly recoiled. But in striking out on her own, she also lost any sympathy for anyone dealing with the same struggles she encountered. Condoleeza feared to reach back a helping hand, for fear it would drag her back as well. So the conversation between herself and her fellow African-Americans became one-sided. Neither side could hear what the other was saying. They were still talking about the same things, just using a different language, and the barriers between them grew.

“You can’t fly with shackles on your feet.”

Condoleeza’s Rites isn’t saying that Condoleeza is wrong, just that she’s taking the wrong lesson from her past, and thus returning with the wrong message. A shift in her angle of sight, a better understanding of who she was and who she’s become, actually facing rather than fleeing the negative voices in her head, these are the insights she needs to gain.

“Forgiveness is the first great act of love.”

Condoleeza’s Rites is an incredibly theatrical piece of performance. They use the projection capabilities to present impressive visuals. The production also uses sound and spectacle in inventive ways. Jokers (demons in masks who taunt Condoleeza in the afterlife and confront her with the unpleasant facts of her childhood years) frequently have their voices piped in as recorded sound effects. The actors playing the Jokers (Jaralyn Mcneal, Alan Mure, Denzel Price, and Makil Price) move their heads and mouths to mimic the sound cues but are, deliberately, just a bit off. The effect is unsettling in the best way, making them seem less, or more, than human, and fitting adversaries for the outsized personality that is Condoleeza. On the other end of the supernatural spectrum, the angels clad in bright white clothes have voices as big as their wing spans. Song brings home what words alone cannot. The cast all does well, and even if one or two of them isn’t the best actor you’ll ever see in your life, they are right for their roles in this context, and that goes a long way.

“What time is it? The black man’s time.”

There is poetry, there is song, there is rap, there is dance, there is some stage combat, there is efficient clever dialogue. All the elements (no pun intended) come together to make Condoleeza’s Rites into an impressive Fringe show. I’m very glad they brought it back again, so I finally had a chance to see if for myself. Even with President Obama in the White House, or perhaps especially because President Obama is in the White House, this Fringe show resonates more powerfully than ever. And probably needs to be heard, now more than ever. It’s as good a place as any, for a national dialogue we so desperately need, to get started.