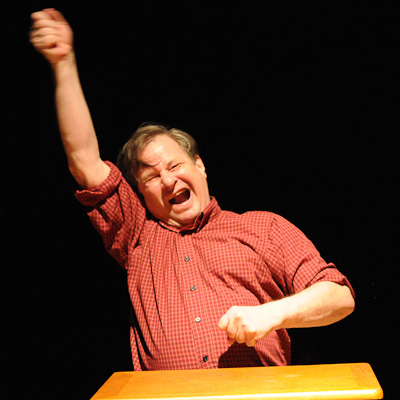 Many a time I have lauded John Munger for opening my eyes to the world of dance, and helping make me a more adventurous audience member when it comes to dance at Fringe time (heck, I’ve got two dance shows in my Top Five this year and another three physical theater shows scattered among my Top 20. That’s largely John’s influence at work.) Mom marvels at John continuing to dance at his age (no, that’s not a backhanded insult, it’s all admiration). Both of us look forward to seeing his Fringe shows whenever they come along. Aardvark Fandango is no different.

No different for us, but quite different for John Munger. Traditionally, John has been joined onstage by multiple other dancers in a variety of combinations, often yielding the stage to other dancers entirely. Sometimes the other dancers are doing his steps, sometimes he is showcasing the work of other Fringers in the festival, giving them a chance to be seen by his audience and promote their show on his time. There is still a moment for a guest artist to strut their stuff (at this performance it was Ben McGinley, giving us a taste of CSI: Ben McGinley – which Mom and I will be seeing later this weekend anyway, but it was fun to get a preview). There is also one other segment built into show that is all guest dancers (from Xenon Dance School) doing John’s choreography (The Pupil Of My I), to give the man a break.

Otherwise, eight of the ten dance segments of the evening are all John, solo. And I just have to say, wow.

John shared that he is developing a suite of dances which dealing with (as he said in the introductory segment) the joys and terrors of aging. This Fringe show is part of that developmental process, and we’re getting a great evening of entertainment out of being a part of that process.

“Workaholic” is set to a piece music by Bach. John shifts through a variety of abstract movements, invoking thoughts of an assembly line, climbing or descending stairs, shrugging, circling, reaching and jumping. Ultimately, this figure ends up flat on his back, exhausted.

Greek Syrtaki music backs up “Craving” – a solo in which John has his focus fixed on a point far downstage of him on a diagonal. The striving to reach that goal downstage, as he constantly gets set back again, is the meat of the piece. Striding, twirling, finally crawling. Even in reaching the goal, it eludes him again.

“How It Feels” is a devilish bit of whimsy, because Elvis croons “Are You Lonesome Tonight?” as a man dances with a liquor bottle. Try as he might, he cannot set himself free. It borders on slapstick, but the more you think about it, the darker the comedy gets. Particularly when he’s able to set himself free, and then comes right back. Sure he’s not stuck to the liquor bottle this time, sure he’s “in control,” but that bottle’s still a part of his life.

Traditional Japanese music provides the foundation for “Tremor,” in which a man haltingly walks, desperately trying to still the shaking of his arms and legs. Occasionally he is successful, though the tremor always returns in a new form.

Munger’s naughty sense of humor gets a chance to take the stage, performing the poem “By The Lake” by Dame Edith Sitwell (who John introduced as a woman who unfortunately looked exactly like her name sounds, “but she’s dead now, so it doesn’t matter.”)

“Obsession,” set to the music of Chopin, finds a man locked in a small circle of movement, reacting to his confinement to a certain range of motion, but finding it hard to break out.

A circle of light takes the focus in “Where We Began.” John starts on the outside of the circle of light and makes his way in, breaking free but ultimately circling back, again to the strains of Bach.

While I’ve seen “Trayage” before, it was good to see it resurface here at the end of the evening. “What Is Dance?” Well, hands can dance, and march, as well as feet, and with a table and a little John Philip Sousa, John Munger demonstrates as much. It delighted Mom a great deal, and was a great upbeat way to send the audience out into the night.

All this, and the man’s fighting a cough, during the marathon that is Fringe week. It’s good to see that some human beings are just unstoppable. It was a great way to end our first day of Fringing, and one of the two best things we saw in a pretty impressive day of theater. Fringe is off to a mighty good start this year.

(Oh, the aardvark. John’s mentor once settled a debate about what animal each of her students would be, and John was deemed to be an aardvark. His mentor is gone, but her pupil is still going strong.)