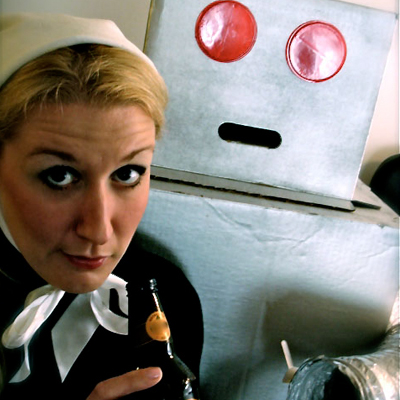 If you held a gun to my head and I could only see 10 Fringe shows, what would they be, and why?

Rebekah is an Amish girl visiting the city for the first time. Robot is a highly advanced robot programed to assist humans. When the two meet there is an instant spark, but can Rebekah leave her family, religion, and the only home she’s ever known for the love of a Godless machine? Featuring a dozen unforgettable songs, “Rumspringa” is the most fun musical about robots and Amish people you’ll see this year.

This one’s my main guilty pleasure this Fringe season.

Growing up in Pennsylvania as I did, we do love our Amish. They’re a big part of the area of the state where I grew up. Plus, great for tourism. So the concept of Rumspringa wasn’t foreign to me. It’s actually a pretty savvy thing for the Amish to do. By letting the young people go into the big city and see the modern world for what it is, they remove the whole allure of the forbidden. And the quiet simple life can seem very comforting and familiar after that. Not everyone returns, but they’re allowed to make up their own minds one way or the other.

Of course, Rumspringa the Musical is hardly a documentary. It was, however, in a previous life, an award-winning student film produced out at the University of Minnesota Morris (where, strangely enough, my play Leave received its new lease on life – and one of the cast members of that production, Alex Carlson, is in this musical as well, so there’s another reason I’m going). The film is where a lot of their promotional clips come from

But this, oh this, is what sold me…

The big love duet – then trio – Not Programmed For Emotion

How can you not love something that ridiculously earnest? And quintessentially musical?

Their trailer is pretty priceless, too…

They’re not all winners, of course.

The big Amish Dance number is less endearing than some of the other clips. Plus…

Oh yeah. Jokes about farm boys screwing sheep. That never gets old. (Not.)

But the opening number…

is kind of perfect in a “get me the hell out of this place” kind of way.

Plus, how adorable is it that the actor playing her father, fake beard and all, is clearly not old enough to be anyone’s father?

Not everyone in the cast has a huge voice. And the Ritz is a big space to fill. Thankfully, they’re performing in the Augsburg Studio space, so that sounds like a smaller theater to fill with sound. That should work to their advantage.

I also just love the theater company name Best Weird Dog, for what it’s worth.

Damn. I’m really almost giddy at how delightfully silly this thing is. I can’t wait.