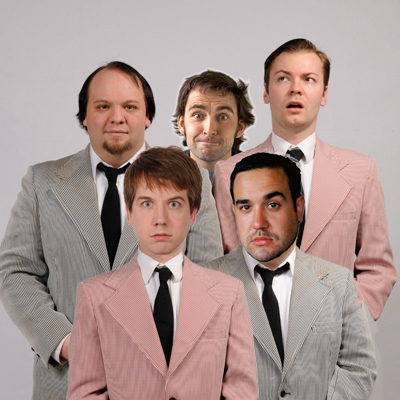 Artists Without Borders (aka, Jimmy Hogg and Four Humors Theater)

Hogg and The Humors

Hogg and The Humors is half talk show – half sketch comedy/improv. Half Jimmy Hogg – half the Four Humors guys (Jason Ballweber, Brant Miller, Nick Ryan, and Matt Spring). Half British – half American. And the whole thing is a hell of a lot of fun.

After a few pre-show minutes of wandering through the audience exchanging greetings, the show proper began with Jimmy, then Jason, Brant, Nick and Matt all coming out on stage to collectively “sex up” the audience. As each guy joined the line, particularly resistant audience members, or sections of the crowd, were assigned for additional sexing with someone’s own personal strategy. Like much of the evening, it was random and silly, but they were all just so committed to the concept, it became progressively funnier.

Then came a demonstration of the “11 Second Dance Party.” Later in the evening, the cast would call out “11 Second Dance Party!” Their tech booth person would crank up the music, and the audience was supposed to get on their feet and… well, dance. For the practice run, to be sure we were ready, they warned us not to get too enthusiastic or the risers might collapse beneath us. Mom was totally into the concept, and surprised me by rising to her feet to dance those 11 seconds away. I was thus shamed into participating in the actual 11 second dance party later in the show.

Jimmy Hogg (a returning favorite among the out of towners, solo storyteller joining us from the United Kingdom) took over the hosting table and chairs as his domain. This relegated the Four Humors guys to fend for themselves to find a place to be seated. Brant ended up on a blue yoga block, Matt got a small gray wooden bench, and Nick perched on a red plastic milk crate. Jason, meanwhile, had an impossibly small concrete block which he could only place one butt cheek on at any given time. His evening was spent being creative with positioning, and looking pained.

Hogg & The Humors continued jockeying for control of the production, but Jimmy had the set list in front of him on the table, so he resisted all efforts to hijack the hour away from him. There would be no premature 11 second dance party on his watch. Nor would they refer to the audience members “tweeting” in the front row before their appropriate time on the rundown. After a plea from the Humors that perhaps Jimmy should translate his banter and “use American references,” we got to the random improvised section of the evening.

Audience members drew three different show descriptions out of a wooden box. The five H’s had cut up the entire Fringe program and each little show description and picture was in the box. Matt would then struggle to read the tiny show description, and Brant would struggle to adequately describe the show photo. The options drawn by that night’s audience were – The Gayer Show, The Actor’s Nightmare, and Spermalot The Musical (three guesses where this is headed, and the first two don’t count). Audience applause determines the winning show. Then that show gets a ten minute improv comedy preview from the Humors. This, despite the fact that the Humors had not seen pretty much any of the shows in the festival (but since each of them are in at least two or more themselves, this isn’t surprising). The Gayer Show was popular (and I hear Brant Miller does a killer Les Kurkendaal impression) but the winner was, of course, Spermalot The Musical.

David Shore came up on stage to play the harp for musical accompanient (no, really). Nick then asked, “Is anyone in the cast of Spermalot here tonight?” (silence) “Good.” I keep forgetting the Four Humors guys are steeped in improv comedy performance, since I’m used to seeing them doing scripted work (Fringe hits like 2006’s Deviled Eggs, 2007’s Bards, and 2008’s Mortem Capiendum. They were on my 2006 Top 10 list because of work with new plays). But they are fearless improvisers. They dive right in and just let the weirdness pile up. The harp began to play and Nick sang out “I am a virgin bride, No one has been inside.” Oh man. Of course, it just got sillier. Brant, Nick’s husband, was clueless how to satisfy his new wife on their wedding night. Matt was a hapless knight in training (who, according to audience instructions, needed to have an Arabian accent – uh, forget it. We ended up with a world tour of peculiar foreign accents instead.) Knight Matt was sent on a quest for a sex manual, to help the newlyweds. Jason ducked in and out to steal some carrots, just to prove how bad a guard night Matt was. But soon Matt was mounting Jason’s back to ride off in search of a sex shop. Brant and Nick became medieval sex shop proprietors, and later a sex ogre, and well, you didn’t expect it to make sense, did you? The quest for the sex manual was fulfilled. Huzzah! (And now you know exactly what Spermalot The Musical is like. Not.)

Special guest artists for the night were Bob and Ashley from Ireland’s Scream Blue Murmur and the show The Morning After The Summer of Love. The chummy conversation (dueling Irish and British accents always a plus) led to a little (dark) humorous banter about the historical conflicts between Ireland and Great Britain (“Your people shipping guns to kill my people” “After you invaded our country” etc.) Murmurs of discomfort were heard in the audience. Jimmy responded, “Ooo. Politics. Very uncomfortable for Americans. We can feel the collective tightening of rectums.”

After that chat concluded, Ashley was set free but Bob was retained to be the star of the big dramatic reading as part of Hogg and The Humors’ “Dramaturgy” series. There apparently was a competition in New York to find the absolute worst play ever written. Boy, did they find it. And now, we would be graced with hearing it. Hogg, the Humors, and Bob performed the tragically written tale of a good suburban boy gone wrong. Think of every cliche – in dialogue, character, plot and even stage directions. This one had it all. It was wonderfully painful to sit through, and laugh at.

The evening concluded with a couple of songs from singer-songwriter Sage Price, who does the musical accompaniment for the visiting Fringe show Cherry Cherry Lemon – clever bouncy tunes called “Diligent Heretic” and “Dirty Little Secret.” Nice way to cap off the show.

This kind of show can fall apart so easily, mostly because it’s so loose to begin with. All lot of it depends on the guests and the success of the improv segments. But since Hogg and the Humors all know how to think on their feet and work a crowd, and they had a good structure to hang it all on, it made for a most pleasant and amusing hour. It also gave a friendly shout out to a half dozen or more other Fringe shows (beyond the ones these guys are all working on), which is a nice nod to the overall community feel of the Fringe this time of year. The best thing you’ll ever see? No, but they’re not trying to be.

Hogg and The Humors is a great way to kick back, relax, and plug into that Fringey vibe. I kind of hope they bring it back somehow as an annual event. In many ways, it’s a perfect distillation of what the Minnesota Fringe Festival is all about.