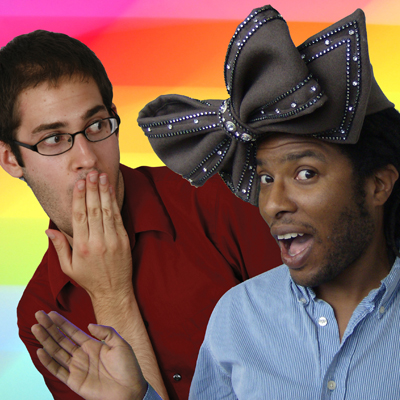 A Show So Good, It Made Mom Cry

“How do you not know what Stonewall is?!”

“How do you not know how to hold my hand?”

I knew from the preview snippet at the Out-of-Towner showcase that this was going to be a good show. Turned out, it was a great show. In fact, it was in a two-way tie for Mom for the very best thing we saw in a Saturday chock-full of really good shows.

“You made my Mom cry!” I called out in angry jest when we chatted with the performers after the show. She did cry. The stories from Les Kurkendaal and Dan Bernitt really moved her. They were also, of course, very funny stories.

Les, especially, is an expert at using humor to cushion the painful emotional blows which peppered the main story which threaded through his coming out narrative. That central issue was the strained relationship Les had with his father for nearly forty years. Les wasn’t the son his father expected, but eventually, after many setbacks, Les’ father realized that he had a son of whom he could be proud. There were many romantic and sexual mishaps along Les’ journey of self-discovery, and self-respect, but it was Les’ unbreakable ties to his family which impacted the audience with the most force. It was a well-modulated series of comic tales, which ultimately added up to something that packed a nice emotional punch.

Dan, by contrast, had almost no worries with his parents. For Dan, the main issue was one of his own – learning to navigate the rocky waters to between sex and intimacy. Not easy for a guy who spends half his time thinking too much, and the other half feeling too much, never quite able to get both those verbs working in unison to help each other out. The decidedly unromantic adventures of Dan were compounded by another ongoing struggle. Dan, being the smart, well-informed fellow he is, often had an easier time embracing the idea of his gay heritage, than just… well, relaxing and being a gay man himself. Moments with poetic turns of phrase slammed up against scenes of personal interaction, and betrayal, that were anything but poetic.

Here again, the whole was greater than the sum of the parts. Gay men, from two different generations, share a stage, a story, and a common future. It’s a simple, but powerful, conclusion – despite all the laughs along the way. No wonder Mom cried.

Yeah, you’ve seen variations on this story before. But not from these guys. So, in that sense, it’s completely unique, and…