Back in fifth grade, Sam Krey joined the circus.

“I fell in love with the circus from that very moment,” Krey said.

Krey, who is now 19, loved the chance to perform in front of more than 900 people when shows sold out at Circus Juventas, a youth circus in St. Paul. Just knowing that a sold-out crowd came to see him leaves a warm feeling in Krey’s heart, he said.

The St. Paul circus school teaches youth ages 3-to-21 the gymnastic, juggling, trapeze and acting skills needed to make a large crowd stand up and cheer. Twice a year in the spring and summer, hundreds of students perform in the Circus’ giant dome in Highland Park in St. Paul. The rest of the year, students take classes and practice.

Like the famous Cirque du Soleil, Circus Juventas tells stories with acting and theater. Unlike the traditional three-ring circus, there are no tigers jumping through hoops or girls riding galloping horses. Instead, there are six-year-olds walking on giant globes and teenagers spinning like basketballs in the air, then being caught by partners on a swinging trapeze.

Connor Houlihan, a long-time friend of Krey’s, introduced him to the circus nine years ago. They started by taking nonperforming classes that helped build their strength and balance. Another friend, Zeb Fricke, joined the circus later, when he was 17.

Krey said that being in the circus and in theater at his school helped improve his grades.

“They stayed the same at first, but after I enrolled in more classes (at the circus), they improved,” he said. “I think that being busy with the classes helped me.”

Left: Like all Circus Juventas artists, Zeb Fricke gets made up before performances. (Photo by Ryan Siemers)

By last summer, the three friends were performing the most challenging and dangerous acts —- walking on the high wire and performing on the Wheel of Death, which requires keeping your balance while walking inside two wire wheels at opposite ends of a long bar that spins in a big circle. They also were teaching classes to younger students.

“We all kind of inspire each other,” Krey said.

The guys loved to test their limits in training to help build more confidence and encourage each other to do his best. During training, they’d watch each other closely from backstage. Afterward, they’d high-five each other but also point out mistakes.

After every show, Krey, Fricke, Houlihan and the other performers celebrated with their closest friends and went out for an hour-long lunch at favorite spots like Mickey’s Diner or Famous Dave’s on 7th Ave. Then it was back to flipping, flying, riding, juggling, tossing, shouting and styling in glittery costumes.

Back to the smells of hot, salty pretzels and steaming, grilled hamburgers. Of sugary cotton candy and buttery popcorn. And finally, back to earth and waving to the audiences after the final act. 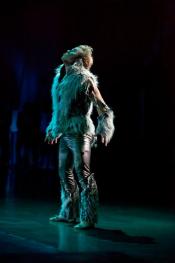 Right: Howlin’ for you: Connor Houlihan performs as Little Red Riding Hood’s wolf in a 2011 performance of “Grimm.” (Photo by Dan Norman)

This fall, the long-time friends split up. Krey started college at DePaul University in Chicago, where he was one of only 30 students accepted into the theater program.

Krey believes that his experience with Circus Juventas made the difference.

“Circus is what sparked my career in acting. It gave me my strength in physical acting because without the use of words … all you have to act on is your body.”

Fricke is working with a circus in Australia and Houlihan is attending a circus school in Canada, trying to polish his skills before auditioning for other big circus companies.

The friends stay in close touch.

“Facebook is a big one,” Houlihan said. “We are constantly posting things and sending each other messages about shows or acts we have seen and what we are up to in general. We call each other when we can, but Zeb is out of the country a lot. Also, Skype is nice because we can actually see our faces while talking.”

They also dream of the time when they’ll perform together again.

“I don’t know where or when, but I can tell you that we are all going to try and create the opportunity to perform together again,” Houlihan said.

“Before we all left, we got together and shared a moment together. We were finally all going to do what we have dreamed of from the time we met. I know that our friendship will stay strong until the day we die.”