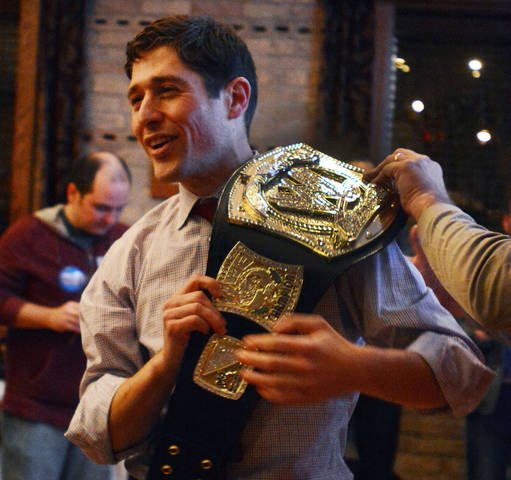 Jacob Frey has been elected to replace two-term incumbent Diane Hofstede as the Minneapolis City Council member for Ward 3.

“I think it’s become so much more than about me. I think it’s a movement towards a new Minneapolis,” Frey said at his election night party at Elsie’s Restaurant, Bar and Bowling Center in northeast Minneapolis with nearly 200 lively supporters.

Beginning in January, the Minneapolis attorney and former Team USA marathon runner will represent a ward that encompasses parts of the University of Minnesota area, including Dinkytown and Marcy-Holmes, as well as portions of Northeast and downtown.

Hofstede, who has held the office since 2006, watched election results with about 100 supporters at a friend’s home on Eighth Avenue Northeast, two blocks from Frey’s party.

When all precincts reported, Hofstede informed her supporters that the results weren’t what they hoped.

“We have had a wonderful eight years,” she said. “This is my home, and this is my community, and I’m going to be here participating and making it better.”

“The idea that two DFL candidates would put almost a quarter of a million dollars into Ward 3, which is a really humble ward of mostly working-class people, is obscene, actually,” Gronquist said. “It’s a tough act to beat. It’s an almost impossible situation for a third party.”

Throughout this election season, Frey amassed more than $100,000 in campaign contributions, nearly double what Hofstede reported.

Sen. Scott Dibble, DFL-Minneapolis, was at Frey’s event Tuesday and said Frey’s strength came in his energy and ability to “gather people around his ideas.”

“Jacob really built a force. He drew upon a lot of new energy,” Dibble said. “People were wanting to get involved in issues that were important to them.”

Frey told the Minnesota Daily last month that his priorities as a City Council member are to be responsive to constituents and include everyone in the decision-making process.

He also said he hopes to push for initiatives that will spur population growth in the city and increase housing density.

Last year, Frey launched a strong grassroots campaign and locked in the DFL endorsement in the spring with more than 70 percent of the delegate vote.

Throughout his campaign, he also secured endorsements from nearly 40 elected officials and organizations, including six of Hofstede’s colleagues on the Minneapolis City Council.

Hamline University law professor David Schultz said he thought Hofstede may have been too complacent.

Throughout Hofstede’s time on the City Council, she’s voted on a number of controversial issues, including the Vikings Stadium deal, which she supported. In August, Hofstede proposed a moratorium on Dinkytown development, which failed to pass the full council.

Hofstede reflected Tuesday on her accomplishments in the ward, particularly regarding riverfront development and strengthening ties with the local East African community.

“We have so many initiatives that we’ve started,” she said. “Keeping up momentum in the third ward is a very rigorous juggling act. We have high expectations in this community.”

Frey credited his campaign’s success to the strong group of supporters he amassed.

“Undoubtedly, the team we’ve put together is rock-solid,” he said. “They’re a whole bunch of misfits from a bunch of different backgrounds that joined in a perfect fashion.”

“He just had such a positive attitude,” Zbikowski said. “When I learned that Jacob was going to be running for City Council, I wanted to get on board.”

Originally from Virginia, Frey first moved to Minneapolis in 2009. During his nearly five years in the city, he organized the Big Gay Race to help defeat last year’s marriage amendment, was appointed to the city’s Capital Long Range Improvement Committee by Mayor R.T. Rybak, and was the first recipient of the city’s Martin Luther King Jr. Award.

“I think Mr. Frey is going to bring some really interesting, progressive politics to the council,” Schultz said.

Frey said he hopes to continue the momentum he’s gained into his term and reach out to more constituents for ideas.

“I’m looking forward to getting my hands extremely dirty by working in the community,” he said.