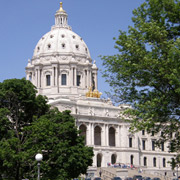 Freshman legislators have the unenviable task of learning the ropes at the State Capitol during a session when they will be confronting a massive $6.8 billion budget deficit. Many pressing budget decisions confront them, including city Local Government Aid (LGA) funding.

The new Republican majorities in the House and Senate have insisted that they can solve the state’s deficit through budget cuts alone, with no tax increases. Furthermore, many members of the new majority are on record saying that they will not make further cuts in state funding for K-12 education, which has already endured an inflation-adjusted 14 percent reduction over the last eight years. Even after adjusting for funding shifts, K-12 education makes up over one-third of state general fund spending.

This should make many first term legislators nervous, including Rep. Marion Greene of Minneapolis and Sen. John Harrington of Saint Paul. The certified 2011 per capita LGA of Minneapolis and Saint Paul is $226 and $217 dollars respectively. (The combined per capita LGA of both cities is $223.) The LGA of the state’s two largest cities will be eyed hungrily by desperate budget cutters.

However, Rep. Greene and Sen. Harrington are not the only freshman legislators with something to worry about. Of Minnesota’s 854 cities, 359 are scheduled to receive 2011 per capita LGA distributions greater than that received by Minneapolis and Saint Paul. While many of these cities are small, some are not. Among the larger cities that receive more per capita LGA than the two core urban centers are Albert Lea, Bemidji, Brainerd, Fergus Falls, New Ulm, Willmar, Winona, and Worthington.

These eight cities have something in common beyond the fact that they are all regional centers and all receive large per capita LGA distributions. All eight are represented by freshman Republican legislators in either the House or the Senate. In fact, of the 359 cities that receive more per capita LGA than Minneapolis and Saint Paul, not only are most represented by Republicans, but over half are represented by a freshman Republican in either the House or Senate. Freshman Democrats are not alone in their concerns over the future of LGA.

It should be remembered that the core of the current LGA formula was not designed by Democrats, but by the Republican administration of Tim Pawlenty in 2003. While legislature has the tweaked the LGA formula since 2003, the program’s fundamental elements are still a GOP administration’s product. This fact may temper Republican lambasting of LGA.

Of course, flip-flopping on an issue is not unheard of in the annals of partisan politics. A more significant impediment to modifying the LGA formula so that it’s designed to devastate cities Democrats represent is the likelihood of gubernatorial veto.

Conventional wisdom is that Sen. Dayton’s lead, though slim, will be confirmed by the State Canvassing Board in December and that the number of legitimately disputable ballots will be less than Sen. Dayton’s margin of victory. Given that Rep. Emmer has pledged he “will not be involved in something’s that’s purposefully used for delay,” the stage would appear to be set for the seating of Sen. Dayton as Minnesota’s next governor on January 3.

As governor, Dayton will almost certainly veto any partisan modifications to LGA designed to nail some cities while protecting others. Furthermore, the House and Senate DFL minorities are likely to realize that their best opportunity for meaningful input in the legislative process will be to work with Governor Dayton to uphold his vetoes. Even with their shrunken numbers, Democrats still have more than enough votes to uphold Dayton’s veto of any LGA changes perceived to be unfair.

Regardless of the partisan affiliation or level of seniority of their representatives, cities across the state rely on LGA to fund important public services and provide property tax relief. In addition, eight years of severe LGA cuts have devastated cities across the state; real per capita LGA funding has been slashed by nearly 49 percent from 2002 to 2010.

The state’s current budget mess is not the result of growth in LGA. Not only has LGA funding fallen precipitously since 2002, but real per capita LGA certified to cities for 2011 will be less than it was in 1972, the first year of the LGA program.

Cuts in state aid to cities over the last eight years have lead to large property tax increases and a sharp decline in real per capita city revenue; cities in districts represented by freshman legislators of both parties have been particularly hard hit. For the sake of cities and property taxpayers across the state, policymakers should work toward a bi-partisan resolution to the budget deficit that does not further devastate funding for Local Government Aid.