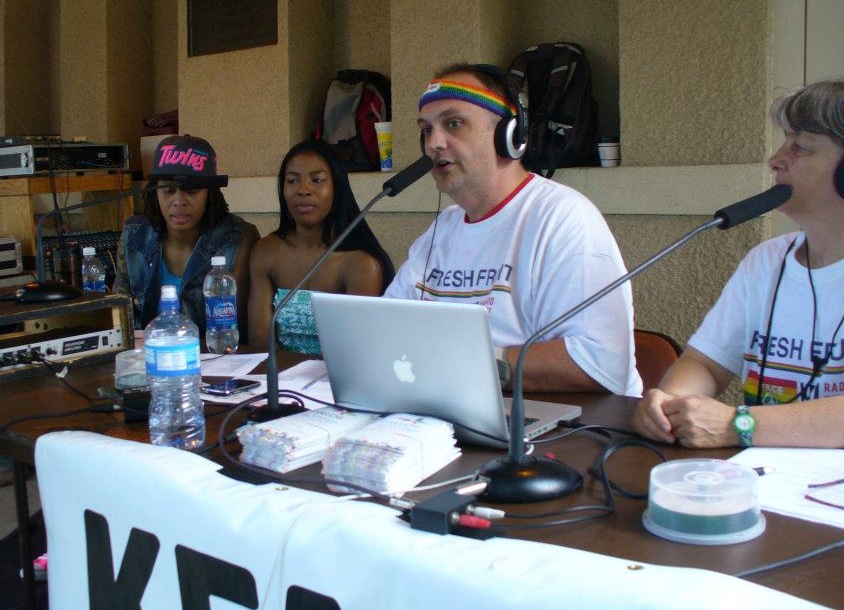 In 2012, Fresh Fruit had a live broadcast to celebrate 40 years of Pride. Photo courtesy Fresh Fruit.

No doubt this year’s Twin Cities Pride Festival is going to be particularly celebratory, what with Minnesota’s recent legalization of same-sex marriage. It’s also a milestone year for Fresh Fruit, the LBGT-focused radio program on KFAI that first launched in 1978. As an institution, Fresh Fruit has been on the front lines throughout its history: not only covering the important issues that have faced the queer community, but providing an outlet and a voice for LGBT individuals and providing a queer perspective about everything from politics to arts and culture.

Dixie Treichel has been a host of Fresh Fruit since the 1990s and is currently working on a new half-hour radio documentary about the program, which will air on KFAI this summer and which will eventually lead to a longer documentary. Treichel has interviewed some of the original members of the collective along with various hosts of the show throughout the years in her ongoing project.

Fresh Fruit originally began as a collective, Treichel said, which included four men and one woman: it was called the Fresh Fruit Collective. They were Ted Faigle, Mark (who then went by Maya) Matthiessen, Richard (who then went by Shannon) MacDougall, and Kirk Hoffmeier (who died of AIDS in 1992). Treichel is currently still in search for the name and more information about the fifth person in the group, a lesbian woman.

In 1977, according to Treichel, the collective members all lived together in a “queer hippie household” and wanted to have a fun project to do together. They had heard about a new radio station that was going to start airing (Fresh Air, now KFAI), and they wanted to see if the new station would want to have a gay show.

Fresh Air radio didn’t get its license until 1978, when it first aired from Walker Church on May 1 of that year. Fresh Fruit, a play on the station’s main title, aired for the first time on May 11, 1978. However, the collective began preparations for about a year before they first aired, gathering news and writings from different GLBT focused publications, focusing on various political issues. For example, the group spent a good deal amount of time researching the anti-gay activist, former pageant contestant, and pop singer Anita Bryant, who equated homosexuality with Nazi-ism, and who came to the Twin Cities in 1977.

The original collective’s tenure with the station was short-lived. Their household fell apart, and all of the members left except Ted Faigle, who did Fresh Fruit by himself until the end of 1978, when he handed the reins over to Claude Peck, who hosted the show by himself for a while until he was eventually joined by co-host Marj Schneider.

Gary Peterson co-hosted with Peck and Schneider, and later by himself, through the mid-1980s. The change for the GLBT community in the Twin Cities since Fresh Fruit’s early days, he says, “has been breathtaking for those of us who were there, and unbelievable for those of more recent vintage.” For Peterson, there has been much progress for the community, though there is still a long way to go. “The Twin Cities are not the world,” he said, “and there is a whole lot of the world still needing the change to happen.”

John Townsend, who hosts Fresh Fruit with Treichel on the third Thursday of every month, has been a host since 2000.

The program’s legacy, he says, is that it “really speaks to marginalized people in the GLBT community.” Often, in the broader discussion, wealthy gay men have ruled the discourse. At Fresh Fruit, “there is a broad and conscious and deliberate effort to make sure there are various voices throughout the queer community,” Townsend said.

Throughout its history, the program “has been very helpful as a voice for those in the GLBT community who are marginalized: queer youth, low funded arts endeavors, non-assimilations, those interested in queer international issues and race issues.”

Though he became a host in 2000, Townsend has been active in the GLBT community in general since the late 70s. Fresh Fruit, he said, not only covered political issues but gave coverage to the numerous gay theater companies starting in the late 70s, as well as other cultural forms of representation at the Walker Art Center and Patrick’s Cabaret in the 1980s and 90s, especially during the time when those two organizations were under attack during the “culture wars” for providing a platform for gay performance artist Ron Athey.

Throughout its history, Fresh Fruit hasn’t gotten “caught up in defining gay and lesbian,” Townsend said. “We are very okay with terms like fluid and questioning and asexual.”

And while the program has made strides over the years to cover arts groups and underrepresented movements, they’ve also had numerous high-profile interviews, such as with Edward Albee, Lily Tomlin, and Amy Ray of the Indigo Girls, Townsend said.

In recent years, Fresh Fruit has given extensive coverage to marriage equality issues, bullying, and has  “been persistent and tenacious” in putting for issues that matter to the queer community, according to Townsend.

For more information about Treichel’s documentary, keep an eye on their website and Facebook page. Also, check out clips of various interviews Treichel is using in the documentary she recently aired on her show, now available on Mixcloud.

KFAI is a media partner of the Twin Cities Daily Planet. See (and hear) recent news from KFAI here.