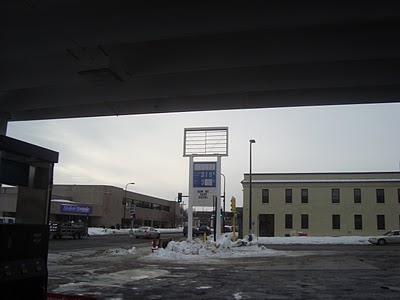 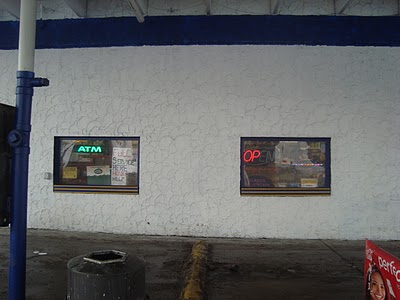 When I heard that the gas station with no name had a new proposal for its redesign, I admit to being skeptical.  After all, the previous design change converted the unused car wash into a fast food joint with a drive-through that would use a public alley as an exit point along a one-way street with limited visibility.  On top of not needing more fast food along Broadway, the drive-through proposal was both dangerous and out of line with city planning on multiple levels.

However, the architect working with the Fremont gas station is the same one who helped with the Dream Home makeover, and I’m glad to see someone take on challenges like this.  It should be noted that the changes are merely proposed, and are contingent on funding and getting the necessary community and city approval.  Also, don’t be disheartened by the drabness of the pictures above.  That’s WHY changes are being proposed.  Finally, I forgot some of my own experience with how emotional people get about colors, and my first reaction was that the gray made me think of a prison.  The color scheme is not finalized, so don’t react to that at all; just focus on the layout.

The Northsider.org has some of these schematics loaded up in a more visually accessible way than I’m able to do on Blogger, so readers can either click on that link or see the pdf files on Google docs:

Since an email mentioned that there was a binder on site, I went inside the gas station for the first time, and…

…encountered your basic convenience store setup, with a slight variation.  Most of the store’s square footage is occupied by the unused car wash, making the shop one big long aisle with pretty much every kind of salty/spicy potato chip you could want, plus the basic overpriced convenience store accoutrements.  Were it not for the friendly and engaging staff, I most likely would have walked out because there was very little for sale that appealed to me.  The aforementioned binder wasn’t anywhere to be found either, although one staff person did have all of the documents at the ready on his iPhone.

They gave me a bit of the history of the place, that it was owned by a husband and wife for over forty years prior to its sale to a previous owner who tried the fast food angle.  The first owners ran one of the few full-service gas stations in all of Minneapolis, and even though they charged 40 cents a gallon more for full service, that amenity brought in double the gasoline sales that the station sees today.  But the next owner did away with the full service, didn’t restore the car wash, and also stopped selling lottery tickets (this last one doesn’t seem so bad, other than it only served to drive away business).

The current owners are making a go of it by trying to better utilize the space they have.  I’m thrilled that there will be more windows; the place as it stands now just looks foreboding.  The gas station/convenience store will be on the east of the property, a deli will sit on the west side, and in between, the owners envision a cell phone store.  (I envision…well, something else.  We’ve already got enough of those stores up and down Broadway.)

The floor plans and site plan are meant to increase friendliness towards pedestrians, a mural is proposed on the site, and yes, that sign will be replaced and the gas station given a new name.  Neighbors Gas & General Store is currently proposed.  A little generic, to be sure, but it beats “You know…that one place.  Where it looks like the sign will fall directly on your head.”

On a final note, much has been made on various NoMi listservs about how this and other gas stations are “compliant.”  I’m still looking for a specific definition of what that means.  Compliant with city codes?  No crime?  Other community standards?  All of the above?  And which gas stations or convenience stores are not compliant, and what is the difference between them and places like soon-to-be Neighbors Gas?

Here’s hoping all the necessary funding comes through to complete the redesign as it’s currently proposed.