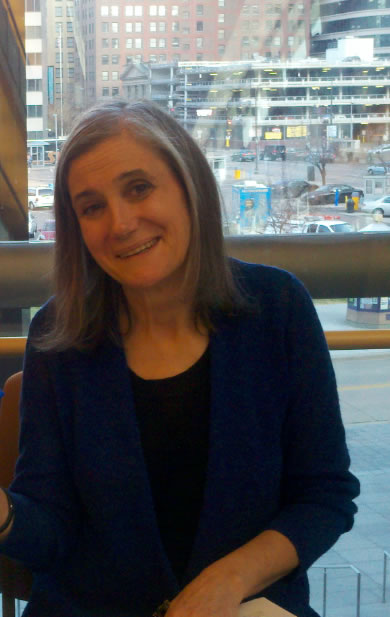 Last night I attended the Minnesota Coalition on Government Information (COGI) John R Finnegan Freedom of Information Award ceremony at the downtown Minneapolis Public Library. COGI is a nonprofit organization of librarians, lawyers, journalists and information fans who strive to support access to government information. (I used to be involved with the group.) Named for John R Finnegan, former editor of the St. Paul Pioneer Press and recipient of the Heroes of the 50 States: The State Open Government Hall of Fame award for 2011 from the National Freedom of Information Coalition (NFOIC) and the Society of Professional Journalists (SPJ), the Finnegan award has been awarded annually since 1989.

This year the award went to Matt Ehling founder of Public Record Media, producer of ground-breaking documentaries, such as Open Source, and creator of “Capitol Conversations”, a weekly live-streamed political talk show broadcast from the capital featuring lawmakers, political pundits, analysts and reporters.

Ehling gave a gracious speech, calling the award the Heisman Trophy of information awards as he shared his passion and views on government transparency. He spoke of how tools that promote government transparency, such as the Minnesota Data Practices Act serve to provide access to information to the general public, but they also support policymakers in their efforts to provide oversight and, finally, access to information provides a common ground for citizens and policymakers on all sides of an issue. Ehling cautioned that access to information was like a muscle – it will atrophy if unused. We need to keep MN Data Practices Act vibrant; we need more partners; we need to keep the idea of transparency alive for the next generation.

“Democracy’s a messy thing,” observed keynote speaker Democracy Now’s Amy Goodman, echoing Ehling’s call to action. She recounted her experience at the Republican National Convention in 2008 as an example of the power and impact of transparency, or, if not transparency, at least the power of getting information to the people. Talking about the RNC in the Twin Cities is a tricky proposition, because most of us have our own memories, but in a way, Goodman drew many of us closer, because I suspect most of us in the room were the people getting the information to more people in one way or another during the demonstrations.

A quick reminder: Amy Goodman, Sharif Abdel Kouddous and Nicole Salazar, all credentialed journalists from Democracy Now, were arrested at the RNC as they covered the demonstrations. Video of that arrest was the most-watched video on YouTube for the first two days of the RNC, which certainly facilitated their early release. The three went on to sue the St Paul and Minneapolis Police Departments and Secret Service for their treatment. They were awarded $100,000 and St Paul was required to develop a more appropriate protocol for handling First Amendment issues with the press and public in similar situations in the future.

Goodman borrowed from Woody Allen to say that 90 percent of life is showing up. It’s true for journalists; it’s also true for engaged citizens. She praised the independent media, the libraries, the dissenters. She told the story of Hans and Sophie Scholl, German Christians who published and distributed pamphlets during the Holocaust shining a light on what was happening in Nazi Germany. They risked their lives (and lost) in an effort to bring information to the people.

Goodman finished by reading from her latest book (Standing Up to the Madness); she chose a chapter called Librarians Unbound and a story of librarians who refused to share patron records with the FBI. It was perfect for the setting and amplified the heroic deeds performed by people who showed up and did the right thing in their quest for transparency and providing access to information.