Early this morning (May 13), a group of Dakota people set out their gill nets on Cedar Lake in Minneapolis, to exercise their fishing rights according to the Treaty of 1805. DNR officials stood at the ready, and when the net was pulled in, it was confiscated, along with about two dozen fish. Participants were identified and ticketed. A group of about forty people witnessed the scene and all involved were quiet, peaceful, and respectful of each other.

As I arrived to a cloudy and cool Cedar Lake at 8 a.m., squads were parked at intersections in the quiet neighborhood. I attended as an “Upstander”, a person who supports the indigenous people in their struggle to maintain their culture and identity. One of the leaders of the group, a retired professor, Chris Mato Nunpa, taught a class I took last fall, on Indigenous People’s Spirituality and World View, at Metro State University.

The parking lot at Cedar Lake Point was full, with the trucks of TV crews from Fox News and MPR, DNR trucks, and unmarked vehicles. Approaching the tiny beach, voices singing and the beats of drumming could be heard, and smoke from a campfire wafted towards me. A crowd was assembled, facing the beach, watching the fishermen and women and cheering. 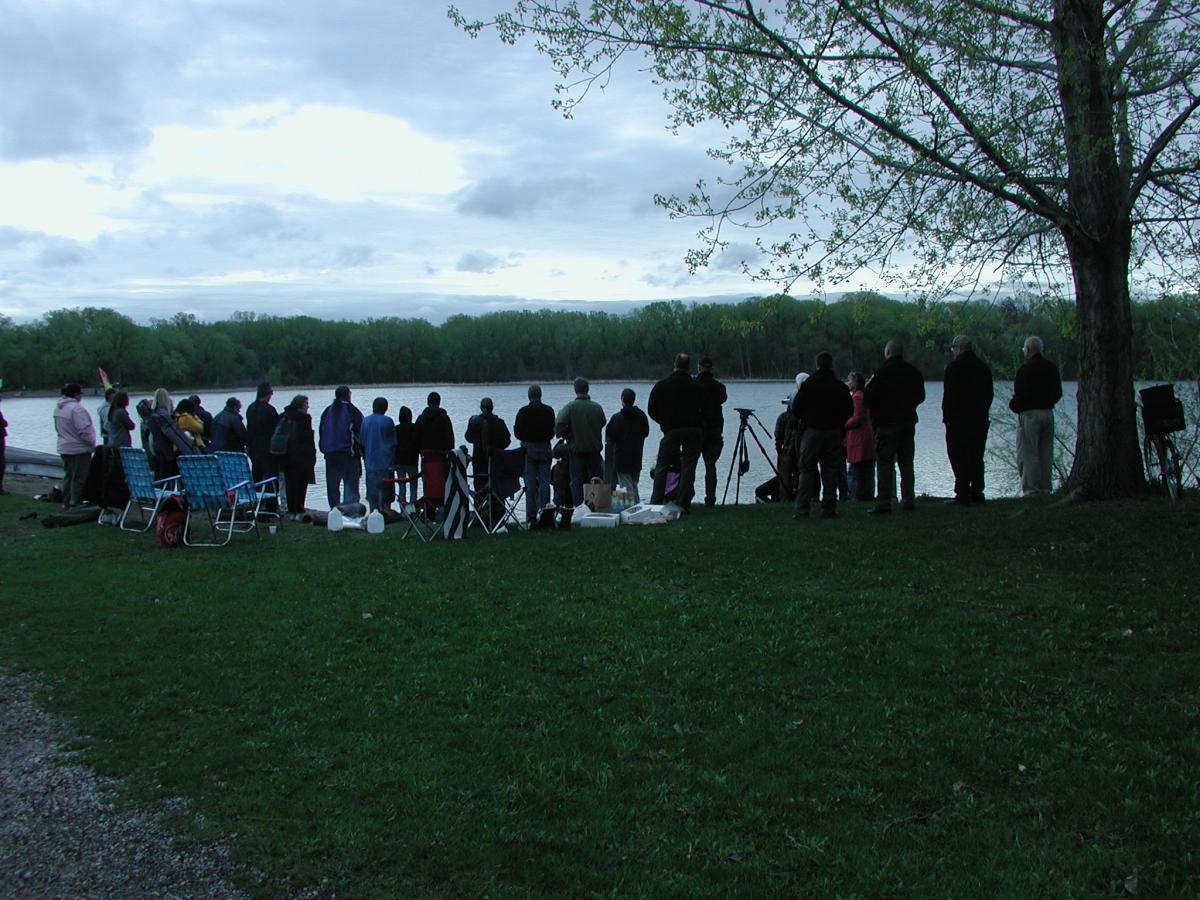 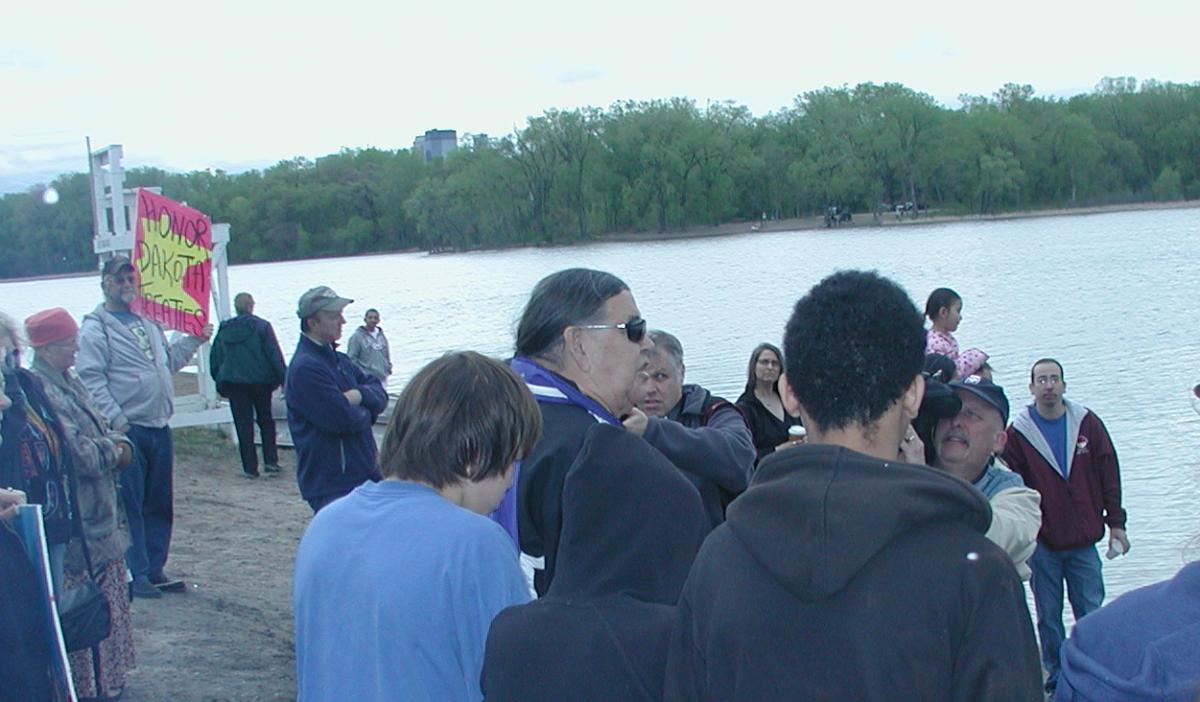 Every hand had a camera in it, recording the scene. Clyde Bellecourt, a well-known Indian leader, stood in the middle of a circle of microphones, exhorting his position that the Dakota people have the right to fish and hunt on this land, as they have for centuries. He challenged the DNR representatives to come and arrest him. He spoke to the younger generation, imploring them to continue to work towards indigenous people’s rights.

Knee-deep in the water, Dakota leaders Chris Mato Nunpa, Jim Anderson, and others, pulled the net in. As the fish were brought to shore and put in a large blue plastic container, the five DNR officials approached the fishermen and asked for identification. Each man and woman’s information was recorded. 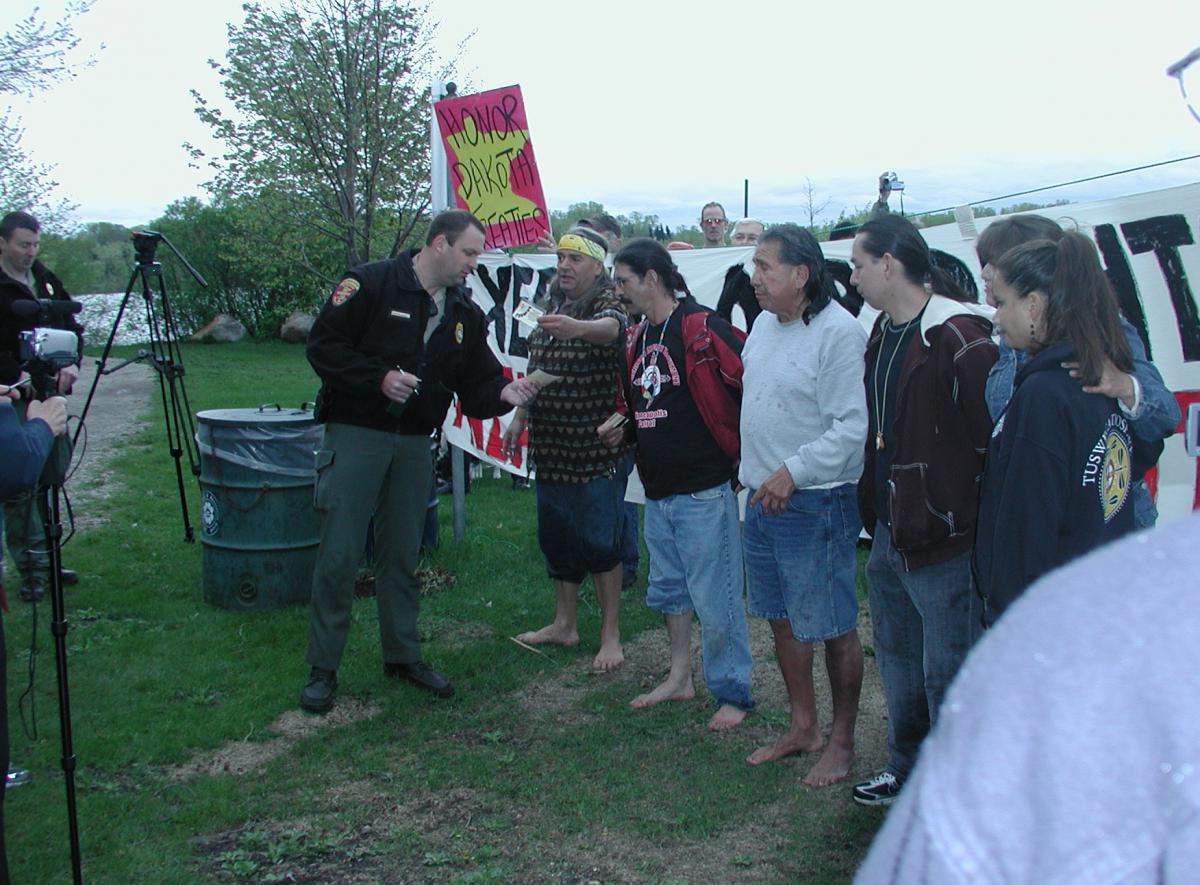 The fish tub and net were confiscated and taken back to the parking lot by the DNR, who laid the catch out and numbered them. We were told they were to be frozen for “evidence”. A receipt was given to the group for the tub. 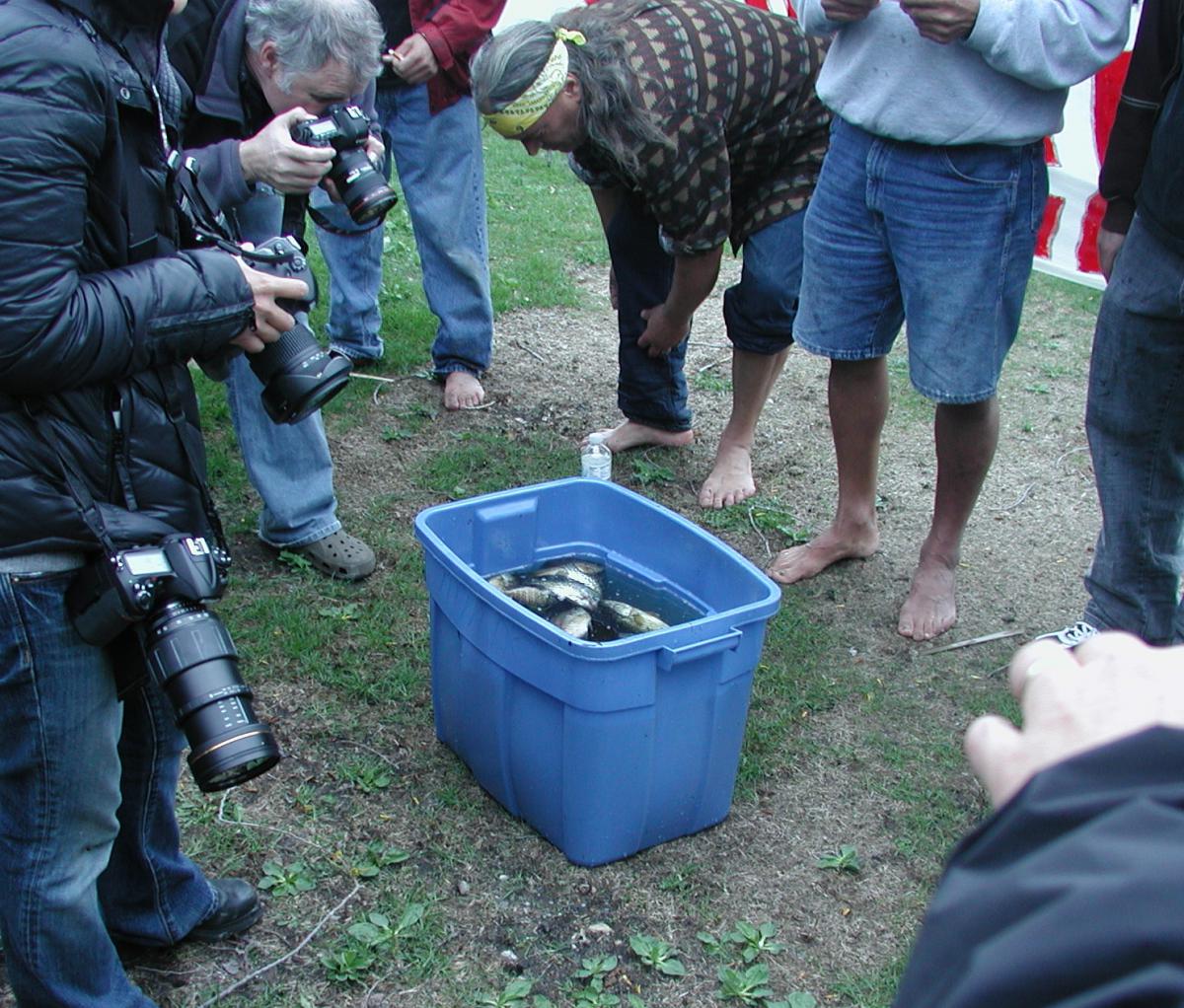 The DNR contingent left, and within an hour, most of the crowd was gone, leaving a few of us to snack on soup and donuts, put the fire out, and clean up the area.

The Treaty of 1805, signed by Lieut. Zebulon Pike of the Army of the United States, and the Sioux Nation of Indians (who were given the “gift” of 60 gallons of liquor prior to signing), granted land to the U.S. for the purposes of building Fort Snelling, and that the U.S. would pay for this land, before possession, $2,000.00 (changed from the original figure of $200,000.00); it stated that the Sioux are permitted “to pass, repass, hunt or make other uses of the said districts, as they have formerly done. . .” (Article 3). The land was never paid for, but taken. The Constitution of the United States, Article VI, states: “treaties are the supreme law of the land.” This is the basis of the fishing rights for the Dakota People that they were exercising. Opponents of indigenous peoples’ fishing rights say this treaty was thrown out in 1863, but yet Fort Snelling was built, and 155,000 acres were taken and not paid for, and therein lies at least one of the bones of contention.

The outcome of this episode remains to be seen. The Dakota People hope to get a day in court on the matter of this treaty.