This photo was taken shortly before the author was arrested. The riot police is shooting his tear gas gun point blank range at accredited journalists and non-violent protesters. (Photos by K. Flo Razowsky)

I have just arrived stateside after being arrested and deported from the Kingdom of Bahrain, for witnessing their repressive response to a people’s movement. Well, that is my take on it at least. I was never actually told why I was being arrested or deported and I was never questioned while in police custody after I was forced into an unmarked car by uniformed officers; taken off the street as I photographed a small, non-violent protest march and the police’s violent response. I had been told though, by friends, that in the days prior to my and 5 of my colleague’s arrests and just days after two others had been arrested and deported, that there were reports in the state media that the government was looking to arrest us. These reports, in government run newspapers and done to discredit us and those we were supporting, gratuitously included that some of us were lesbians and that some of us were married to Israeli Zionists (the latter completely unfounded).

The march at which I was arrested was headed for LuLu Square, or Pearl Roundabout as it is known, the birthplace of this most recent Bahraini revolutionary movement for democracy. Pearl Roundabout is just that, a traffic roundabout on the edge of Manama, Bahrain’s capital, that was a large grassy area with a monument in the center. Since that beginning of this people’s movement, Pearl Roundabout has been closed off with barbed wire, concrete barriers and a 24/7 heavily militarized presence. The monument has been destroyed and the grass has all turned to dust. 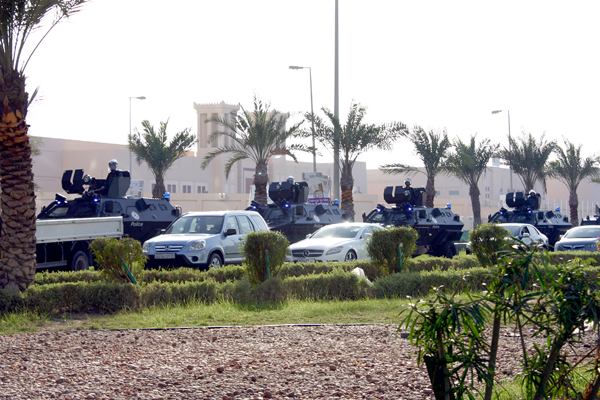 Most village entrances and major thoroughfares were closed down using these APCs. Bahrainis reported this February 14 being the first time they had seen these vehicles.

On February 14, 2011, tens of thousands of Bahrainis began an encampment at Pearl Roundabout in response to and as a part of the Arab Spring independent revolutionary movements for democracy in many of the region’s Arab states. The Bahraini regime, backed by over 1,000 Saudi troops, and using mostly US and European manufactured and provided weaponry, brutally cracked down on this encampment killing some, wounding and jailing scores. Since that time, the peaceful movement in Bahrain has remained steadfast, holding protests and demonstrations everyday, facing repression that has left over 65 dead, hundreds wounded and scores more jailed, most reporting having been tortured. Most of these daily and ongoing forms of resistance have happened in the villages across the small island country and have been met with brutal force. Returning to Pearl Roundabout remains a centerpiece to the movement with the image of the now-destroyed monument a symbol of the revolution.

Leading up to this year’s February 14, one-year anniversary of the ongoing movement, I was part of a group invited to Bahrain by human rights activists there to witness and stand with them. There was a belief that our western passports would cause the authorities to use less brutality against the peaceful movement in a lead up to and on the one-year anniversary. Although it is hard to gauge the effectiveness of such a thing, those who invited us do indeed feel that our presence there mitigated the violence with which the police responded to protests. Judging by the way the Bahraini government targeted those of us who were there to witness and report, our presence felt threatening and needed to be eliminated. It was obvious in the way we were targeted and by the government’s denial of entry to most prominent human rights organizations and accredited journalists in the month, that they did not want outside eyes witnessing what happened leading up to, on and following February 14. 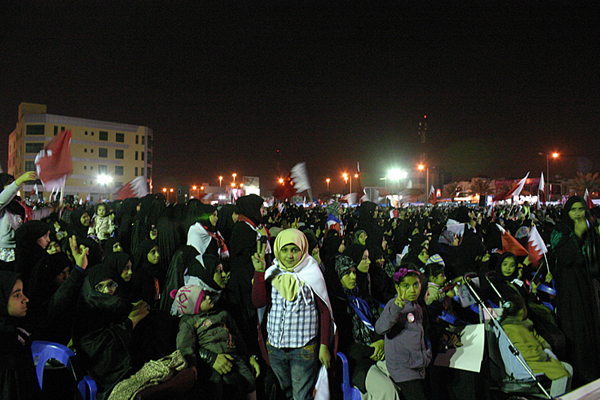 During one of the nightly mass rallies in Freedom Square.

In the short time I was able to be in Bahrain, I had the opportunity to meet many in the movement, some leaders in the struggle, most just regular folks fighting for their equality and dignity. I was able to visit villages and see their resistance and the government response. I was able to sit with people across the movement and hear their stories of why they are struggling and how it has affected them. I heard stories of people jailed and tortured, fired from their jobs, unable to get work. I heard stories of censorship and surveillance. I saw riot police on a nightly basis massed around the country, entering villages to suppress demonstrations and shooting massive amounts of tear gas, birdshot, rubber bullets and sound grenades into these villages and demonstrations. I met people shot with that birdshot and rubber bullets for demonstrating in their villages. I met families of people killed at the hands of the riot police; brutal ends to lives because of fighting for one’s freedom. And I was tear gassed along with thousands of others, saw a funeral procession attacked by riot police, marched in a demonstration that was tens of thousands strong and clearly showed the strength and determination of the Bahraini people. (For more on these stories and to watch unfolding events, check out WitnessBahrain.org)

At the first police station I was taken to on the day I was “arrested”, I saw what I assume was a young boy, bound and hooded being dragged somewhere deep into the station. I still wonder where that person was taken and what fate awaited him. I wonder where he is today. My assumption is he was taken to some cell somewhere and tortured for being a part of his people’s struggle. And I wonder about all of those most likely in a similar situation as his that aren’t so much in the forefront of my mind simply because I did not see them dragged across a police station room. I met many people like them after their experiences in the torture chambers. People with cigarette burn scars still showing, people who told stories of being forced to stand for days at a time, beaten whenever they would collapse. Stories of being forced to lie naked on a cold, wet cell floor with the air conditioning full blast, stories of being threatened with the rape of your mother, sister, wife if you did not say what the regime wanted you to say.

While in Bahrain, the government blocked access to our website, WitnessBahrain.org. The message found when one would attempt to access the site said it had been removed due to: “violating laws and regulations of the Kingdom of Bahrain”. It seems human rights monitoring violates the Kingdom’s laws. Ours wasn’t the only site blocked, The Bahrain Center for Human Rights site and most like it have also been permanently blocked in Bahrain by the regime. Along with censorship, the level of obvious surveillance in Bahrain is overwhelming and led me to suspect most everyone. It also made me realize that along with what was so obvious, there must have been at least as much surveillance that was not.

Before I went to Bahrain, I had read an article in the New York Times about a coffee shop that is the meeting place for the revolution. On my 3am arrival in Bahrain, the first place I was taken was this very same coffee shop and it indeed was the place at which everyone met, on their way to and from demonstrations and protests, and from where you could daily witness hundreds of masked Bahrainis, male and female, defending their space against the riot police. I was told upon that first visit to the coffee shop that because so many revolutionaries occasioned there and due to the attention of the New York Times article, is was also a place for the spies who watched them. This reality did not stop anyone from meeting or openly organizing there but simply became a known quantity.

There was also, during demonstrations, quite obvious surveillance. During one such situation, there were several undercover policemen that suddenly emerged from the demonstration in order to detain and whisk away a young boy for some reason we did not understand. After they had scooped him up and into an unmarked building, these five men began to follow two of my comrades and myself. They began walking ahead of us, blocking the width of the sidewalk. Their tactics seemed to change when one of them went to the left in order to bend down and tie his shoe while the others went to the right to look into the afternoon sky as if bird watching. After we passed them, they resumed walking, again forming a line behind us walking in a line the width of the sidewalk. Eventually they disappeared, shortly after which the riot police arrived to gas the demonstration turned march. Within an hour of that encounter, two of my comrades were arrested and on their way to deportation.

Those first two arrests began a targeted campaign to pick us off one by one and get us out of the country seemingly to continue the government’s agenda of having no outside witnesses to their behavior. Not surprisingly, President Obama’s administration, friendly with and fully supporting the Bahraini regime, has toed the Kingdom’s line and accused us of incitement. In this case, it seems, incitement is photographing abuses and supporting a people’s movement.

In the days leading up to February 14, the news was full of President Obama’s attempt to circumvent a U.S. Congressional veto of his proposed arms package to Bahrain by breaking down the package into increments small enough to not need Congressional approval. This broken down package has now been put on “pause”, most likely due to unfavorable press coverage and grassroots pressure, leaving one to wonder for how long. President Obama has certainly not used the U.S.’s special relationship and unique influence (Bahrain is also home to the US Navy’s 5th Fleet) to pressure the Kingdom to less violently respond to it’s people but instead has basically given Bahrain the green light by way of turning a blind eye. During this time of great change in the region, and while Obama says, “we stand for principles that include universal rights for all people and just political and economic reform”, Bahrain, because of it’s geographical location in the world and because of the U.S.’s relationship to Saudi Arabia, becomes one of the many special cases of U.S. double standards.

And so, on this past February 14, while the world celebrated it’s hallmark holiday of love, the people of Bahrain were given the gift of tear gas, rubber bullets, and continued repression, the card signed by the Kingdom, the ink blown dry by President Obama himself. Despite these collusions of global power though, I, for one, and others like me, will continue, no matter the beatings, attacks or lies told against us, to fight for what is right in this world. Like those come before us who fought with and stood alongside those in the U.S. civil rights movement, in the struggles of Central and South America, in South Africa and occupied Palestine, and as the people of Bahrain proclaim, we will remain steadfast. 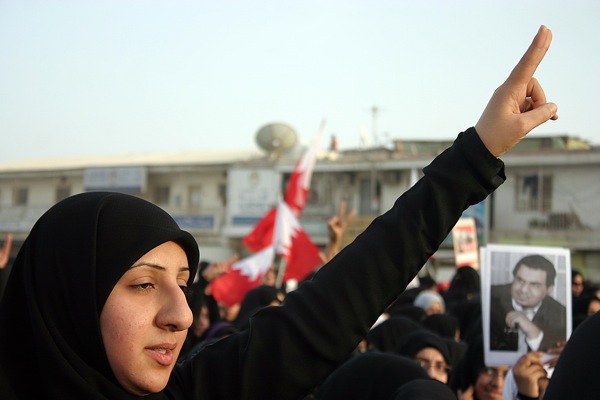 A common greeting amongst Bahrainis, the victory symbol and Samoud which means steadfast. This shot was taken during a march tens of thousands strong.