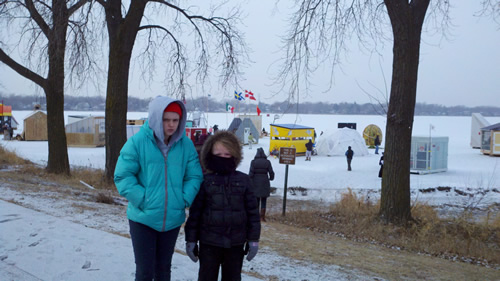 Photos and video by Ann Treacy

For folks outside Minnesota (or other cold parts), some people around here like to fish in the winter by drilling a hole in the ice of a frozen lake. They like it so much they have houses they can put around the hole. Some folks have huge mansion type ice fishing houses and they usually include heaters – because the ice is generally so thick around here by this time of year, it’s safe. This year has been unseasonably warm. It was 50 degrees earlier this week. So we were worried about the Art Shanties – but they got permission from the County to move forward. And on Wednesday it got cold. Today it was about 10 degrees when we were out there.

Due to the earlier warm weather, the shanties are much closer to shore than in the past, but that’s OK. There were a couple dozen I think. They are very cool (no pun intended)and the artists who create the shanties are generally pretty friendly and are happy to tell you about their project and they might even have an interactive component to the shanty. Here are a few brief descriptions of some of the shanties: