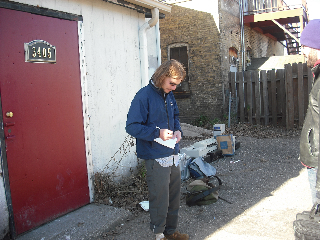 “It all started with Richard Seymour talking about Free Geek from Portland, Oregon at Arise Bookstore in September of 2007,” said Thomas Saunders, a co-founder of the Free Geek Twin Cities, a project of the nonprofit Twin Cities Open Circuit organization. “After hearing about Portland’s program of recycling old computers and providing computers to those who most needed them, I and some friends said, ‘Why not do it here in the Twin Cities?'”

Free Geek Twin Cities accepts computers as donations to create refurbished computers for anyone or for households who cannot afford a computer. According to a 2007 study conducted by the Center for Rural Policy and Development Fund, only 25 percent of households earning less than $25,000 own a computer.

Prior to moving into their building on 3405 Chicago Ave. S., Minneapolis in October, Amanda Luker, Steve Cayford, Brian Dunette, Joe Turgeon, and Thomas Saunders met in coffee shops, talking about how to raise funds to become a non-profit.  This December Free Geek Twin Cities will open for volunteers after their renovation is completed.

There are two programs:  Adoption and Build.  In the Adoption Program, volunteers disassemble computers and learn how to test hardware.  After 24 hours of volunteering, they receive a refurbished computer as well as training on how to use it.  The Build Program is more technical. Volunteers build computers from scratch. After assembling five computers, they can take home the sixth computer for free.

Items that can be donated include computers, printers, scanners, LCD monitors and cell phones.  However some items such as Styrofoam, microwave ovens, and copiers cannot be donated. There is no fee for hardware donations but they do encourage a monetary donation to help pay for recycling costs if it cannot be reused.

Some people are concerned that donating a computer may mean that someone else gains access to their personal information. At Free Geek Twin Cities, Thomas Saunders states, “We take [data security] quite seriously.  Every hard-drive we accept is wiped clean with 3 passes of DBAN software which actually takes three or four hours for each hard drive.”