It was on assignment for the Daily Planet that I had my first experience on the cable access show Freaky Deeky. When I stripped to my boxers and jumped around wearing a pair of Hulk hands at the show’s conclusion, I thought, well, I’ve probably just disqualified myself for every job I’d never want. A year later, I was running across the stage at Patrick’s Cabaret wearing nothing but a Snuggie, yelling, “Get naked! Get naked!” Two years later, Freaky Deeky is over.

After four years on the air, Freaky Deeky broadcast its final episode on Sunday night, March 25, via the Minneapolis Television Network. I was there, along with such a huge collection of “freaks” (cast members) that we had to take shifts on camera in timed release, like clay pigeons. After the show ended, we all went up to Hotbed Studios in Northeast Minneapolis for an afterparty and episode screening. Several people wept.

What was Freaky Deeky? It was a free-form visual playground. It evolved from earlier shows created by producer Hamil Griffin-Cassidy; in those early shows, viewers would call the show to sing or recite poetry while Hamil and various collaborators goofed around and deployed a limited arsenal of visual effects. Eventually Hamil realized that callers didn’t need any prompts: they could just call in and say whatever they wanted while the visual pyrotechnics flew. Thus was born Freaky Deeky.

What started as principally a collaboration between Hamil and underground filmmaker “Rock ‘n’ Roll” Raymond P. Whalen quickly grew in scope and ambition while never losing its loose, iconoclastic spirit. Live music, typically improvised by electronic musicians, was added; and the show’s visuals took a quantum leap with the recruitment of Hal “Time Squid” Lovemelt. By the time I first encountered the show in January 2010, the classic lineup was in place: Hamil producing and co-starring, Hal at the helm of a sprawling deck of video gadgets, Ray hosting and taking calls, “Papa” Matt Bardins on camera one, and Brent Koenig and Micah Buckley-Farlee alternately providing the music. 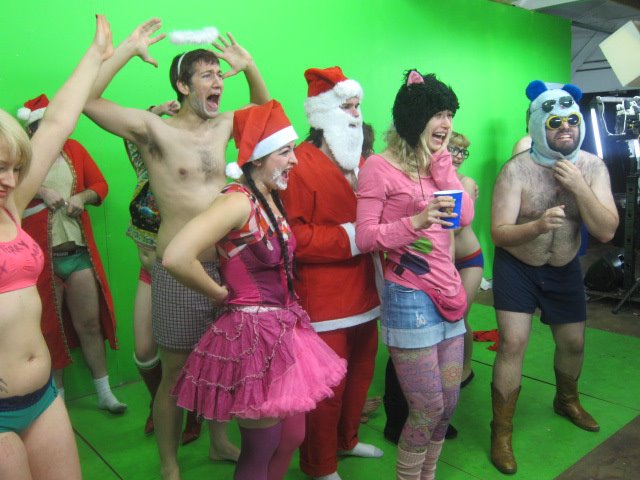 I appeared on the show regularly for the last two years of its run. During that period, the show introduced another host of innovations: with the help of David Rector, Hal eventually had three or more cameras on the action at any given time, and a camera pointed at a tabletop blue screen allowed another layer of live visuals. Prerecorded roll-in segments became more ambitious, reaching their peak with a two-episode superhero epic starring Erik and Vanessa as supervillains in a secret lair. Ultimately the show moved out of the MTN studios and into Hotbed Studios—home base of Savage Aural Hotbed’s Stuart DeVaan—where Hal and Hamil could further expand their digital toolbox. The show sprouted a website, a Facebook page, a Tumblr, and a Twitter account.

Freaky Deeky also performed five live shows, each very different and each appropriately ridiculous. First came an appearance headlining the 25th anniversary bash of Patrick’s Cabaret, followed by appearances including a benefit show (for props and equipment) at the 7th Street Entry, a cameo at Bassgasm (possibly the only time the Freaky Deeky freaks were outfreaked), a gig hosting the Bomp dance night’s First Avenue Mainroom debut (the next day, my arms were sore from all the hyping I’d done), and an appearance at the Zombie Pub Crawl with 2 Live Crew as openers. Like the TV show, every live show ended with a ten-minute “Naked Time” wherein we stripped to our underwear (or, in some instances, even less) and urged the audience to follow suit. Most spectators just looked on in bewilderment, but some of them got into the action—during Naked Time at Patrick’s, performance artist Heidi Arneson went topless and cried, “Well, I guess now I can never be President!”

Why did the fun have to end? Well, in a sense it hasn’t. It was time for Hamil, Hal, and others to be relieved of the weekly responsibility of hosting an increasingly complex show, but it’s likely that the freaks will reconvene for occasional shows and events. The show has also launched or boosted the careers of a wide range of collaborators—from illustrators to burlesque dancers. Check out any adventurous performance event or party in the Twin Cities today, and chances are high that at least one Freaky Deeky friend is somehow involved, whether behind the scenes or onstage (watch for the ones who are dressed either outrageously or not at all). 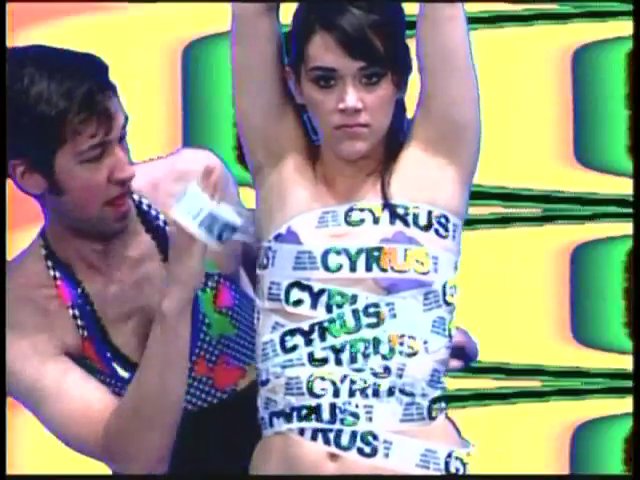 A lot of people had a hard time understanding Freaky Deeky, and sometimes there honestly wasn’t much to understand: a bunch of people running around in costumes while a caller recited, in monotone, the lyrics to a Bruce Springsteen song. But at least several times each episode, the stars aligned and something unforgettable happened. My favorite moments include:

• My first episode, when I played an angry sun god demanding human sacrifice.

• The “Factory” episode, where freaks assembled various products while I wandered around as a voyeuristic Andy Warhol, ultimately being force-fed a can of Campbell’s soup.

• The “Dream” episode. It began with me going to sleep and waking into a Freaky Deeky dream land, and ended with me going back to sleep and being stripped of my pajamas for Naked Time. (After that one, my conservative cousin felt compelled to voice his concern with the direction my life was heading.)

• The Valentine’s Day episode in 2010, when instead of the usual shenanigans we just laid around on couches and fed each other chocolate-dipped strawberries while viewers called to ask what the hell was going on.

• Sam Gelfand joining the show and playing a series of hilariously straight-faced characters, including a parody of Howard Cosell for the “Sports” episode. (“Hamil Griffin-Cassidy! How’s that hernia?”)

• The “Dinner” episode—probably my single favorite episode I appeared on—which featured an overhead camera capturing our dinner table. At the episode’s outset we sat politely down for dinner and opened a steaming pot of baby-doll heads; by the end of dinner, we were all in a half-naked human hogpile in the middle of the table.

• Mummifying Vanessa with one of two rolls of promotional plastic tape that the producers of the John C. Reilly movie Cyrus had mailed to me at the Daily Planet. We used the second roll to reprise the stunt on Sunday for the final episode.

• A dream-sequence montage where Bobby staggered through the alleys of Minneapolis until coming upon a garage where he finally came face-to-face with our weekly caller Biker Dad.

The show’s greatest moment of pop-culture fame was when it was featured in the independent film hit Stuck Between Stations; on an overnight odyssey through Minneapolis, the film’s two characters visit the set of Freaky Deeky. Critics liked the film, but they weren’t sure what to make of that scene: wasn’t it kind of, well, implausible? Yes, totally implausible—a show like that could never happen in a city without Hamil Griffin-Cassidy, a cool public access station, and an superabundance of completely shameless freaks. 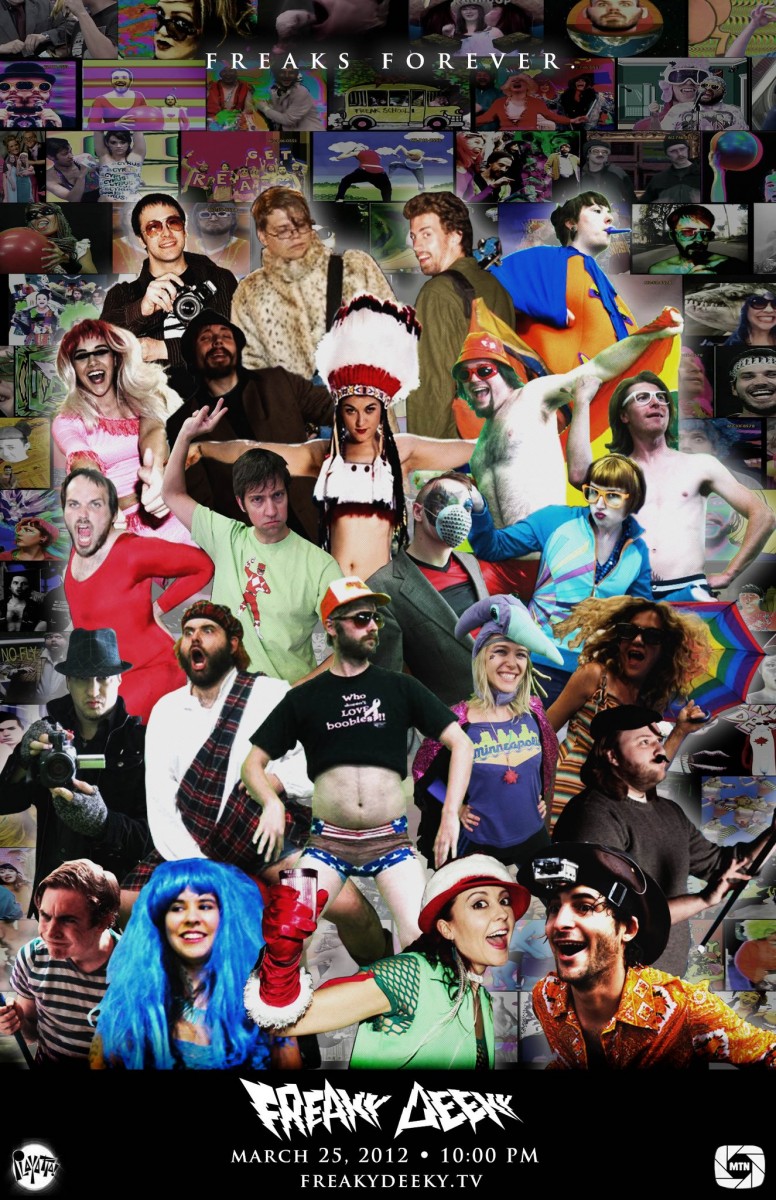