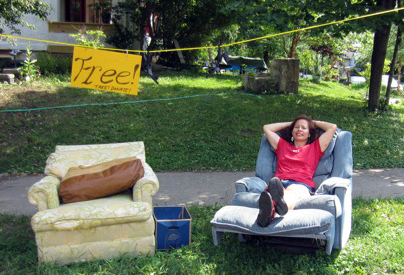 Photo above courtesy Ruth Fen. Photo below by Meredith White.

The Franklin Free Market, situated at Franklin and Bedford Avenues, has become an unusual—and controversial—neighborhood landmark in Prospect Park. Over the last few years, motorists and neighbors have noticed an ever-changing selection of goods free for the taking. A friendly sign invites passersby to freely take from or donate items to the “market.” Though it rests in the boulevard, the heart of the market is in the home of its founder, Ruth Fen.

Four years ago, Fen held a garage sale that didn’t quite sell out. She placed some of the remaining goods near the curb with a sign, a practice common in the neighborhood. When the items quickly disappeared, she offered up a few more items from her home. Inspired by appreciative takers, Fen kept it going. She saw one woman select an entire set of dishes from the market, and she notes that the woman told her, “God bless you, it is our first set of dishes!” as she carried them away.

Not everyone has been as appreciative of Fen’s efforts. “That stuff is an eyesore in the neighborhood,” neighbor Helen Sahlin told me via e-mail. An anonymous critic once posted a typed, laminated sign reading “eyesore” on an easy chair in the market. Fen was undeterred, defiantly sharing a picture of the sign on Facebook along with an adaptation of a T.S. Eliot poem:

And indeed there will be time
To wonder, “Do I dare?” and, “Do I dare?”
Do I dare to settle and RECLINE?
With a bald spot in the middle of THAT chair—
(neighbors say: “How that market is a growing pain!”)
A morning coat, a pair of shoes, mounted firmly and insane,
There’s a necktie rich and modest, but asserted by a simple pin—
(They will say: “But how that yard is such a sin!”)
Do I dare
Disturb the universe?
In a minute there is time
For decisions and revisions to take a moment to recline. 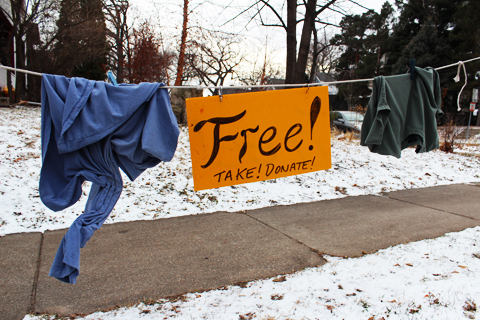 An advocate of the market is Robin Schow. A friend of Fen’s, Schow reports that she enjoys driving by the market and seeing what people take or try on. She admits, however, that she does not live in the neighborhood, and that it may be “much more charming if you don’t live by it.” Fen notes that there are complaints made to the city every so often, at which time she always promptly removes the items by the deadline given. Schow vouches for Fen, noting that she is always “very responsible” when it comes to taking care of leftover items.

Prospect Park resident Tom Carlson adds that clearly there is a demand for some sort of “neighborhood cooperative or market.” He cites ideas for a greater Franklin Free Market tended to by several neighbors, perhaps adjacent to the nearby lot on Warwick that is used as a community garden.

According to Fen, most of the items are gone within a day or two. Items of necessity (clothing, furniture, housewares) are taken most quickly. Fen herself has a ficus tree sitting in her dining room that was once destined for the curb, and one of the more valuable items to come through was a fold-up bicycle. A freelance graphic designer, Fen plans to further establish the market by tidying its appearance and creating an artistic display to make it more pleasing to the eye.

Fen recalls the old adage, “one man’s junk is another man’s treasure.” By the looks of the mint condition retro table sitting in her kitchen—rescued, recently, from the market—there are treasures to be found in the Franklin Free Market.