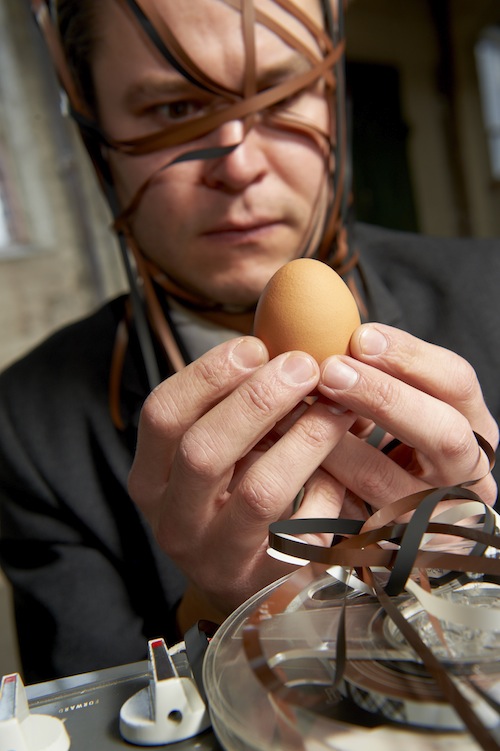 Oh, those Irish playwrights! So dreary, so filled with dark humor, so unhopeful about the human spirit. And yet, we Americans just eat them up—from Samuel Beckett to Tom Murphy to Martin McDonagh, there’s just something so delicious about exploring humankind’s depravity gilded with the Irish wit. In this tradition comes Enda Walsh, whose Misterman, a one-man show, is currently being presented by Frank Theatre at the Southern Theater.

There’s even a bit of a Beckett homage in the play, as Thomas Magill replays conversations on reel-to-reel tape. Certainly you can’t help but think of Krapp’s Last Tape at the device, although the plot is completely different. It’s also not the only way that Thomas recalls the past. At times, he converses with the tape, where the other person’s voice is being played and he speaks out loud to it. He also acts out both parts, at times, and then sometimes you hear both his and the other person’s voices recorded. I was trying to figure out the rhyme or reason about when Walsh uses recording verses acting it out. I’m sure there is one, but I would need to see the play again. In either case though, clearly Thomas is obsessing about the past: reliving it, being tortured by it.

But where is he? The vast set, designed by Michael Sommers, filled with rickety furniture and appliances, junk and multiple reel-to-reels (and a suit that hangs ominously over everything) imprisons Thomas. Is he at home, endlessly splicing and editing the audio of the conversations that he has recorded over his life between himself and his mother, his mechanic, the saucy waitress at the town diner, the angelic-looking young woman that he falls in love with, and other various characters of the town?  Perhaps he’s in prison, or maybe purgatory? My bet is purgatory, actually, but I admit I got the idea from Patrick Bailey (who was one of the recorded voices, along with Bain Boehlke, Virginia Burke, Chris Carlson, Mike Croswell, Joe Dowling, Annie Enneking, Melissa Hart, Mark Rhein, Sara Richardson, and Cheryl Willis). Whether it’s literally purgatory or not, certainly he’s in a metaphorical purgatory.

John Catron does well in the immensely challenging performance, playing the neurotic and anxious Thomas and quickly switching to become the other characters. Thomas reminds me a bit of Ignatius J. Reilly from A Confederacy of Dunces: a fool caught up in his own hypocritical sanctimony, although rather than a blundering oaf, Thomas has a childishness about him, and Catron definitely emits a cherubic glow as the character.

I do I think perhaps Catron would have been better served in a more intimate venue, allowing him to be fed more from the audience. While the Southern’s large stage has allowed Michael Sommers free range for a cool set, I bet he could have evoked the same feeling in a smaller space, and made it more cramped, which might have aided the idea of Thomas being imprisoned by his memories.

Kudos must go to Michael Croswell and the extremely complex sound design, as well as the all star cast that makes up the voiced characters. You really feel by the end that you’ve been to this creepy little town, and, like Thomas, are a bit haunted by it as well.